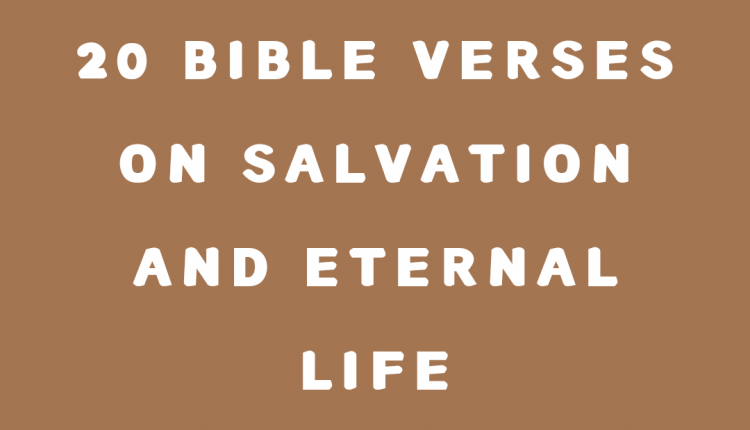 Today we will be dealing with 20 bible verses on salvation and eternal life. This is one of the most debated topics in the Christian faith. The scripture said in the book of John 3:16 For God so loved the world that He gave His only begotten Son, that whoever believes in Him should not perish but have everlasting life. Salvation comes first by hearing the word of God and believing in the only begotten son of the father. During this process, a man confesses his sin and accepts the supremacy of God over his life and he submits himself rulership of Christ Jesus.

God stated that He takes no pride in the death of a sinner but repentance through Christ Jesus. And the scripture said whoever believes in Jesus Christ will not die but have eternal life. Eternal Life is the life after this physical realm. This is the hope of our salvation as believers. Christ said I’m going to prepare a place for you so that where I am you may be too one day. Eternal life is our inheritance through Christ Jesus. And if there is anything every believer must work on getting it is eternal life. Getting it is not automatic. That’s why the scripture stated that no man who lays his hands on the plow and looks back is fit for the kingdom of heaven. Let he that thinks he stands to take heed unless he falls.

When Jesus saw the crowd around him, he gave orders to cross to the other side of the lake. Then a teacher of the law came to him and said, “Teacher, I will follow you wherever you go.” Jesus replied, “Foxes have dens and birds have nests, but the Son of Man has no place to lay his head.” Another disciple said to him, “Lord, first let me go and bury my father.” But Jesus told him, “Follow me, and let the dead bury their own dead.”

He then brought them out and asked, “Sirs, what must I do to be saved?” 31 They replied, “Believe in the Lord Jesus, and you will be saved—you and your household.” Then they spoke the word of the Lord to him and to all the others in his house. At that hour of the night the jailer took them and washed their wounds; then immediately he and all his household were baptized.

For I am convinced that neither death nor life, neither angels nor demons, neither the present nor the future, nor any powers, neither height nor depth, nor anything else in all creation, will be able to separate us from the love of God that is in Christ Jesus our Lord.

though I myself have reasons for such confidence. If someone else thinks they have reasons to put confidence in the flesh, I have more: circumcised on the eighth day, of the people of Israel, of the tribe of Benjamin, a Hebrew of Hebrews; in regard to the law, a Pharisee; as for zeal, persecuting the church; as for righteousness based on the law, faultless. But whatever were gains to me I now consider loss for the sake of Christ. What is more, I consider everything a loss because of the surpassing worth of knowing Christ Jesus my Lord, for whose sake I have lost all things. I consider them garbage, that I may gain Christ and be found in him, not having a righteousness of my own that comes from the law, but that which is through faith in Christ—the righteousness that comes from God on the basis of faith. I want to know Christ—yes, to know the power of his resurrection and participation in his sufferings, becoming like him in his death, and so, somehow, attaining to the resurrection from the dead.

I will expose your righteousness and your works, and they will not benefit you.

Produce fruit in keeping with repentance. And do not begin to say to yourselves, ‘We have Abraham as our father.’ For I tell you that out of these stones God can raise up children for Abraham.

Peter replied, “Repent and be baptized, every one of you, in the name of Jesus Christ for the forgiveness of your sins. And you will receive the gift of the Holy Spirit.

Salvation is found in no one else, for there is no other name under heaven given to mankind by which we must be saved.”

Jesus answered, “I am the way and the truth and the life. No one comes to the Father except through me.

Not everyone who says to me, ‘Lord, Lord,’ will enter the kingdom of heaven, but only the one who does the will of my Father who is in heaven.

He has saved us and called us to a holy life—not because of anything we have done but because of his own purpose and grace. This grace was given us in Christ Jesus before the beginning of time.

Truly my soul finds rest in God; my salvation comes from him.

For the grace of God has appeared that offers salvation to all people. It teaches us to say “No” to ungodliness and worldly passions, and to live self-controlled, upright and godly lives in this present age.

For the Son of Man came to seek and to save the lost.

Whoever believes and is baptized will be saved, but whoever does not believe will be condemned.

So Christ was sacrificed once to take away the sins of many; and he will appear a second time, not to bear sin, but to bring salvation to those who are waiting for him.

20 Bible Verses About Discernment of Spirits

20 Bible Verses To Pray Against The Spirit of Anger

20 Bible Verses To Pray For Motivation This month

20 Bible Verses To Pray For Children as God’s Vessels