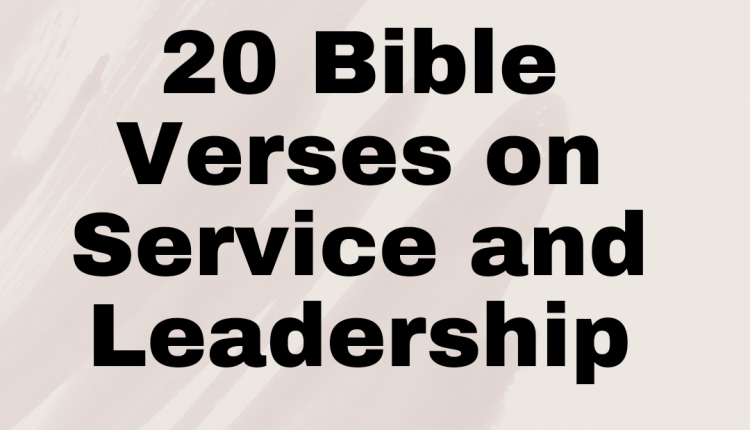 20 Bible Verses on Service and Leadership

Today we will be dealing with 20 bible verses on service and leadership. For we are Christ ambassadors called to serve human need, through our potential until the body of Christ is built up. The concept of leadership and service has been misconstrued. It is impossible to be a great leader when you lack the ability to serve. One might mistake what the Bible said in the book of Luke 19:13 And he called his ten servants, and delivered them ten pounds, and said unto them, Occupy till I come. Some versions of the scripture said dominate till I come, while others interpret it as do business till I come.

When the Bible said dominate till I come, it doesn’t mean we should turn ourselves into dictators or tyrant leaders. Leadership is all about rendering service. Christ was a great leader, yet he served tirelessly till the day he was taken. Anyone who thinks they are too big to serve means they are too small to lead. Before Jesus became the leader of a multitude, He served relentlessly in the synagogue under the tutelage of scholars. Even when he was about to be taken, the assailants could not recognize him from the midst of his apostles because he never raised himself above his Apostles.

Matthew 20:26 Yet it shall not be so among you; but whoever desires to become great among you, let him be your servant. This was Jesus speaking to the people. He stated that whoever wants to be great must first be ready to serve. It is rather unfortunate that many people want to skip the process of service in their approach as leaders. Service and Leadership are intertwined. As believers God wants us to serve. It is through our services that the gospel of Christ will be propagated. We have compiled a list of 20 bible verses on service and leadership.

But it is not this way with you, but the one who is the greatest among you must become like the youngest, and the leader like the servant.

Now, O Lord my God, You have made Your servant king in place of my father David, yet I am but a little child; I do not know how to go out or come in.

He said, “No; rather I indeed come now as captain of the host of the Lord.” And Joshua fell on his face to the earth, and bowed down, and said to him, “What has my lord to say to his servant?”

And now it has pleased You to bless the house of Your servant, that it may continue forever before You; for You, O Lord, have blessed, and it is blessed forever.”

It was at this time that He went off to the mountain to pray, and He spent the whole night in prayer to God. And when day came, He called His disciples to Him and chose twelve of them, whom He also named as apostles: Simon, whom He also named Peter, and Andrew his brother; and James and John; and Philip and Bartholomew; and Matthew and Thomas; James the son of Alphaeus, and Simon who was called the Zealot; Judas the son of James, and Judas Iscariot, who became a traitor.

Obey your leaders and submit to them, for they keep watch over your souls as those who will give an account. Let them do this with joy and not with grief, for this would be unprofitable for you.

Your rulers are rebels and companions of thieves; Everyone loves a bribe And chases after rewards. They do not defend the orphan, nor does the widow’s plea come before them.

But we request of you, brethren, that you appreciate those who diligently labor among you, and have charge over you in the Lord and give you instruction,

“If a king judges the poor with truth, His throne will be established forever.”

“Don’t be selfish; don’t try to impress others. Be humble, thinking of others as better than yourselves.”

“Let nothing be done through selfish ambition or conceit, but in lowliness of mind let each esteem others better than himself. Let each of you look out not only for his own interests, but also for the interests of others.”

“A faithful, sensible servant is one to whom the master can give the responsibility of managing his other household servants and feeding them. If the master returns and finds that the servant has done a good job, there will be a reward. I tell you the truth, the master will put that servant in charge of all he owns.”

“But select capable men from all the people—men who fear God, trustworthy men who hate dishonest gain —and appoint them as officials over thousands, hundreds, fifties and tens.”

“Whatever your hand finds to do, do it with your might; for there is no work or device or knowledge or wisdom in the grave where you are going.”

“Therefore an overseer must be above reproach, the husband of one wife, sober-minded, self-controlled, respectable, hospitable, able to teach,”

“Be diligent to present yourself approved to God, a worker who does not need to be ashamed, rightly dividing the word of truth. But shun profane and idle babblings, for they will increase to more ungodliness.”

“Be shepherds of God’s flock that is under your care, watching over them—not because you must, but because you are willing, as God wants you to be; not pursuing dishonest gain, but eager to serve; 3 not lording it over those entrusted to you, but being examples to the flock. And when the Chief Shepherd appears, you will receive the crown of glory that will never fade away.”

“Pay careful attention to yourselves and to all the flock, in which the Holy Spirit has made you overseers, to care for the church of God, which he obtained with his own blood.”