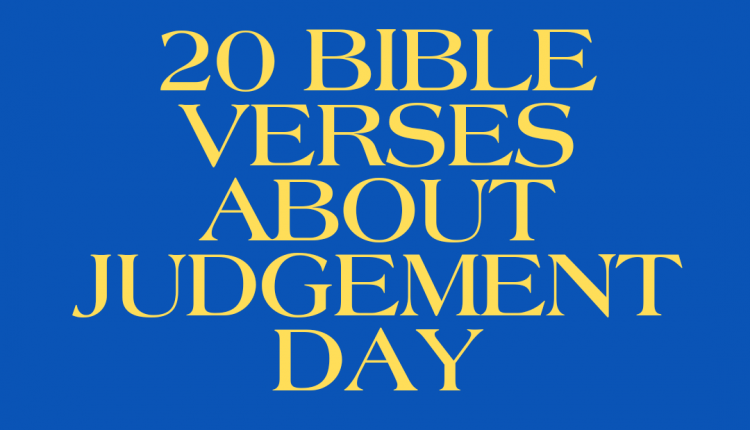 Today we will be dealing with 20 Bible verses about judgment day. The day of judgment is a day of decision-making. As long as we live on earth, everything we do in life matters. That judgment day is to decide whether we are going to heaven or hell. According to the teachings of the scripture, the heaven is a place prepared by Christ Jesus for people of God. Christ said in the book of John 14:3 And if I go and prepare a place for you, I will come again and receive you to Myself; that where I am, there you may be also. Christ has prepared a place for us in the world beyond. A place where there will be no death, pain, or sorrow. A place where there will be no darkness as Christ is the light of the place.

Meanwhile, as there is heaven for God’s children, there is also a place for the children of the devil. That place is called hell. It is a place of torment, agony, and great pain. The similarity between these two places is that they are for life everlasting. Nevertheless, a man doesn’t just gain access to heaven or be sent to hell without judgment. A judgment must be passed on every individual who tasted death. It is on this judgment day that the people of God will go to heaven and the people of Satan will go to hell.

While the scripture may not tell us exactly the day judgment will happen, it, however, states that it shall come after the death of a man. Hebrews 9:27 And as it is appointed for men to die once, but after this the judgment. After death comes judgment. Every man will be judged. After the judgment, heaven will receive God’s people and hell will be made available to those who were found wanting. It is a day of reckoning. As believers, we must always remember this day as it serves as a caution for us. There are quite a number of places in the Bible that expressed more on judgment day. We have highlighted 20 Bible verses about judgment day.

For it is time for judgment to begin with the household of God; and if it begins with us first, what will be the outcome for those who do not obey the gospel of God?

Then I saw a great white throne and him who was seated on it. From his presence earth and sky fled away, and no place was found for them. And I saw the dead, great and small, standing before the throne, and books were opened. Then another book was opened, which is the book of life. And the dead were judged by what was written in the books, according to what they had done. And the sea gave up the dead who were in it, Death and Hades gave up the dead who were in them, and they were judged, each one of them, according to what they had done. Then Death and Hades were thrown into the lake of fire. This is the second death, the lake of fire. And if anyone’s name was not found written in the book of life, he was thrown into the lake of fire.

And just as it is appointed for man to die once, and after that comes judgment,

Therefore do not pronounce judgment before the time, before the Lord comes, who will bring to light the things now hidden in darkness and will disclose the purposes of the heart. Then each one will receive his commendation from God.

For we must all appear before the judgment seat of Christ, so that each one may receive what is due for what he has done in the body, whether good or evil.

Then I saw an angel coming down from heaven, holding in his hand the key to the bottomless pit and a great chain. And he seized the dragon, that ancient serpent, who is the devil and Satan, and bound him for a thousand years, and threw him into the pit, and shut it and sealed it over him, so that he might not deceive the nations any longer, until the thousand years were ended. After that he must be released for a little while. Then I saw thrones, and seated on them were those to whom the authority to judge was committed. Also I saw the souls of those who had been beheaded for the testimony of Jesus and for the word of God, and those who had not worshiped the beast or its image and had not received its mark on their foreheads or their hands. They came to life and reigned with Christ for a thousand years. The rest of the dead did not come to life until the thousand years were ended. This is the first resurrection.

“But concerning that day and hour no one knows, not even the angels of heaven, nor the Son, but the Father only.

He will wipe away every tear from their eyes, and death shall be no more, neither shall there be mourning, nor crying, nor pain anymore, for the former things have passed away.”

For if God did not spare angels when they sinned, but cast them into hell and committed them to chains of gloomy darkness to be kept until the judgment;

Because he has fixed a day on which he will judge the world in righteousness by a man whom he has appointed; and of this he has given assurance to all by raising him from the dead.”

But if we judged ourselves truly, we would not be judged.

Beloved, never avenge yourselves, but leave it to the wrath of God, for it is written, “Vengeance is mine, I will repay, says the Lord.”

When the Son of Man comes in his glory, and all the angels with him, then he will sit on his glorious throne. Before him will be gathered all the nations, and he will separate people one from another as a shepherd separates the sheep from the goats. And he will place the sheep on his right, but the goats on the left. Then the King will say to those on his right, ‘Come, you who are blessed by my Father, inherit the kingdom prepared for you from the foundation of the world. For I was hungry and you gave me food, I was thirsty and you gave me drink, I was a stranger and you welcomed me,

On that day when, according to my gospel, God judges the secrets of men by Christ Jesus.

“Beware of practicing your righteousness before other people in order to be seen by them, for then you will have no reward from your Father who is in heaven. “Thus, when you give to the needy, sound no trumpet before you, as the hypocrites do in the synagogues and in the streets, that they may be praised by others. Truly, I say to you, they have received their reward. But when you give to the needy, do not let your left hand know what your right hand is doing, so that your giving may be in secret. And your Father who sees in secret will reward you. “And when you pray, you must not be like the hypocrites. For they love to stand and pray in the synagogues and at the street corners, that they may be seen by others. Truly,

For with the judgment you pronounce you will be judged, and with the measure you use it will be measured to you.

But the day of the Lord will come like a thief, and then the heavens will pass away with a roar, and the heavenly bodies will be burned up and dissolved, and the earth and the works that are done on it will be exposed. Since all these things are thus to be dissolved, what sort of people ought you to be in lives of holiness and godliness, waiting for and hastening the coming of the day of God, because of which the heavens will be set on fire and dissolved, and the heavenly bodies will melt as they burn! But according to his promise we are waiting for new heavens and a new earth in which righteousness dwells.

And I saw the dead, great and small, standing before the throne, and books were opened. Then another book was opened, which is the book of life. And the dead were judged by what was written in the books, according to what they had done.

20 Bible Verses About Judging Others Righteously

20 Scriptures on Judgement of the Wicked