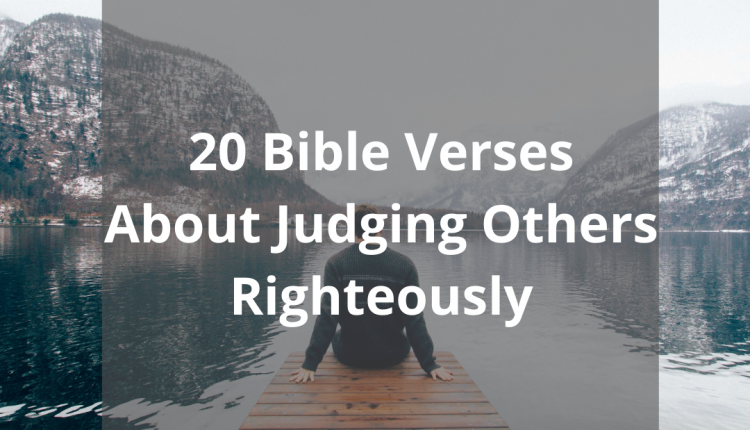 20 Bible Verses About Judging Others Righteously

Today we will be dealing with 20 Bible verses about judging others righteously. The problem most believers have today is our judgemental Spirit. We are so quick to condemn people, we are so quick to judge people wrongly without being in their shoes or feeling a fragment of their pain. The Pharisees and Sadducees were quick to judge the prostitute that came to the feet of Jesus to beg for mercy. They wanted the woman to be judged according to the law. And by the law, she is meant to be stoned to death. But Jesus told them in the book of John 8:7 So when they continued asking Him, He raised Himself up and said to them, “He who is without sin among you, let him throw a stone at her first.” Jesus told the people that whoever is righteous among them should be the first to cast the stone. And the scripture recorded that they all left the place one after the other, not a single stone was cast on the woman.

This is the point that most believers miss out on when they are about to judge others. That thing that you considered a sin, it is not that you are perfect that is why you didn’t fall into the pit of sin, you are only enjoying grace. We abuse that grace over our life anytime we judge others. Even the scripture told us to chastise others with love. Instead of condemning people to the cross, there are better ways to judge others righteously. Every judgment belongs to God. The moment we put ourselves in the position of a judge, we have sinned to God.

Nevertheless, there are ways we can correct people. There is a better approach to let people know that the things they do or are doing are wrong. There are better ways to help people right their wrongs and bring them back to Christ. To find out some of these ways, we have compiled 20 Bible verses about judging others righteously.

Do not participate in the unfruitful deeds of darkness, but instead even expose them.

“You shall appoint for yourself judges and officers in all your towns which the Lord your God is giving you, according to your tribes, and they shall judge the people with righteous judgment. You shall not distort justice; you shall not be partial, and you shall not take a bribe, for a bribe blinds the eyes of the wise and perverts the words of the righteous. Justice, and only justice, you shall pursue, that you may live and possess the land which the Lord your God is giving you.

“You shall not pervert the justice due to your needy brother in his dispute. Keep far from a false charge, and do not kill the innocent or the righteous, for I will not acquit the guilty.

‘You shall do no injustice in judgment; you shall not be partial to the poor nor defer to the great, but you are to judge your neighbor fairly

“Then I charged your judges at that time, saying, ‘Hear the cases between your fellow countrymen, and judge righteously between a man and his fellow countryman, or the alien who is with him. You shall not show partiality in judgment; you shall hear the small and the great alike. You shall not fear man, for the judgment is God’s. The case that is too hard for you, you shall bring to me, and I will hear it.’

These also are sayings of the wise.

To show partiality in judgment is not good.

When all Israel heard of the judgment which the king had handed down, they feared the king, for they saw that the wisdom of God was in him to administer justice.

“But if a man is righteous and practices justice and righteousness, and does not eat at the mountain shrines or lift up his eyes to the idols of the house of Israel, or defile his neighbor’s wife or approach a woman during her menstrual period— if a man does not oppress anyone, but restores to the debtor his pledge, does not commit robbery, but gives his bread to the hungry and covers the naked with clothing,

Then Samuel said to all Israel, “Behold, I have listened to your voice in all that you said to me and I have appointed a king over you. Now, here is the king walking before you, but I am old and gray, and behold my sons are with you. And I have walked before you from my youth even to this day. Here I am; bear witness against me before the Lord and His anointed. Whose ox have I taken, or whose donkey have I taken, or whom have I defrauded? Whom have I oppressed, or from whose hand have I taken a bribe to blind my eyes with it? I will restore it to you.

Someone in the crowd said to Him, “Teacher, tell my brother to divide the family inheritance with me.” But He said to him, “Man, who appointed Me a judge or arbitrator over you?”

Do not judge according to appearance, but judge with righteous judgment.”

“Do not judge so that you will not be judged. For in the way you judge, you will be judged; and by your standard of measure, it will be measured to you. Why do you look at the speck that is in your brother’s eye, but do not notice the log that is in your own eye?

“Do not judge, and you will not be judged; and do not condemn, and you will not be condemned; pardon, and you will be pardoned. Give, and it will be given to you. They will pour into your lap a good measure—pressed down, shaken together, and running over. For by your standard of measure it will be measured to you in return.” And He also spoke a parable to them: “A blind man cannot guide a blind man, can he? Will they not both fall into a pit?

Do not speak against one another, brethren. He who speaks against a brother or judges his brother, speaks against the law and judges the law; but if you judge the law, you are not a doer of the law but a judge of it. There is only one Lawgiver and Judge, the One who is able to save and to destroy; but who are you who judge your neighbor?

For what have I to do with judging outsiders? Do you not judge those who are within the church? But those who are outside, God judges. Remove the wicked man from among yourselves.