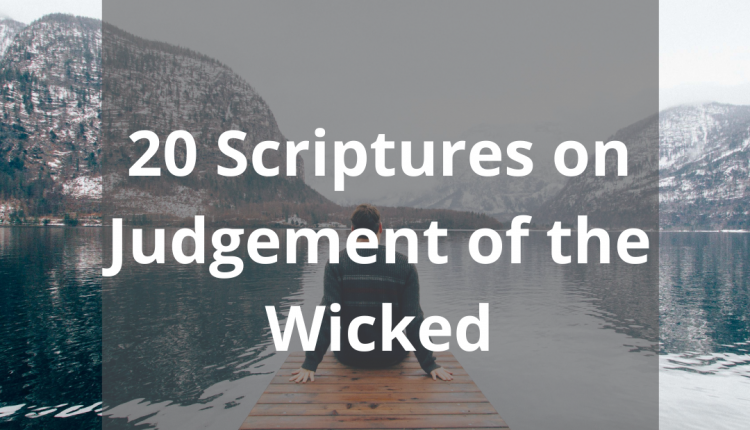 20 Scriptures on Judgement of the Wicked

Today we will be dealing with 20 scriptures on the judgment of the wicked. We sometimes think God doesn’t see the wicked. Just because they get away with whatever they do doesn’t mean that God doesn’t see them. If many of us are put in the position of a jury there are so many people we would have condemned to death. We believe that the judgment of the Lord is not timely that’s why evil people get away despite all their evil deeds. One thing we have forgotten is that God’s time is different from ours. And there are several reasons why the Lord may not quickly judge the wicked. One of the few reasons why it seems the judgment of the wicked doesn’t come quickly is because God is giving them chance for repentance. But contrary to our belief or thinking, the wicked shall be judged too.

It might only take time, but the wicked will be judged by God. There are several instances in the scripture that back this claim. So, if you have been seeing someone doing some evil things and you wonder why the wrath of God has not come on them. God might be giving them chance to repent. The story of King Pharoah should taught all of us a great lesson. Despite the evil that Pharoah had done to the children of Isreal, it took time before the wrath of God came upon him.

All the time the children of Isreal were being treated badly, God kept mute. Some of the Israelites might even think God was blind to see the pain and suffering they are going through in the hands of Pharoah. God was reluctant to judge Pharoah, but when he did, the outcome was catastrophic for Pharoah and the entire people of Egypt. Do not seek judgment elsewhere, every judgment is in the hands of God the Father and everyone will be judged including the wicked. To ascertain this claim that the wicked will be judged, we will highlight 20 scriptures on judgment of the wicked. Take time to study these scriptures.

He who justifies the wicked and he who condemns the righteous, Both of them alike are an abomination to the Lord.

The Lord is slow to anger and great in power, And the Lord will by no means leave the guilty unpunished. In whirlwind and storm is His way, And clouds are the dust beneath His feet.

He said to him, ‘By your own words I will judge you, you worthless slave. Did you know that I am an exacting man, taking up what I did not lay down and reaping what I did not sow?

By faith Noah, being warned by God about things not yet seen, in reverence prepared an ark for the salvation of his household, by which he condemned the world, and became an heir of the righteousness which is according to faith.

When I say to the wicked, ‘You will surely die,’ and you do not warn him or speak out to warn the wicked from his wicked way that he may live, that wicked man shall die in his iniquity, but his blood I will require at your hand.

Behold, on the mountains the feet of him who brings good news, Who announces peace! Celebrate your feasts, O Judah;

Pay your vows. For never again will the wicked one pass through you; He is cut off completely

For to a person who is good in His sight He has given wisdom and knowledge and joy, while to the sinner He has given the task of gathering and collecting so that he may give to one who is good in God’s sight. This too is vanity and striving after wind.

Blessed is the man Who walks not in the counsel of the ungodly, Nor stands in the path of sinners, Nor sits in the seat of the scornful; But his delight is in the law of the LORD, And in His law he meditates day and night. He shall be like a tree Planted by the rivers of water, That brings forth its fruit in its season, Whose leaf also shall not wither; And whatever he does shall prosper. The ungodly are not so, But are like the chaff which the wind drives away. Therefore the ungodly shall not stand in the judgment, Nor sinners in the congregation of the righteous.

To execute on them the judgment written; This is an honor for all His godly ones. Praise the Lord!

Add iniquity to their iniquity, And may they not come into Your righteousness.

A good man will obtain favor from the Lord, But He will condemn a man who devises evil.

And we know that the judgment of God rightly falls upon those who practice such things.

But do you suppose this, O man, when you pass judgment on those who practice such things and do the same yourself, that you will escape the judgment of God?

And He, when He comes, will convict the world concerning sin and righteousness and judgment;

“But you were full of judgment on the wicked; Judgment and justice take hold of you

Judgments are prepared for scoffers,

And blows for the back of fools.