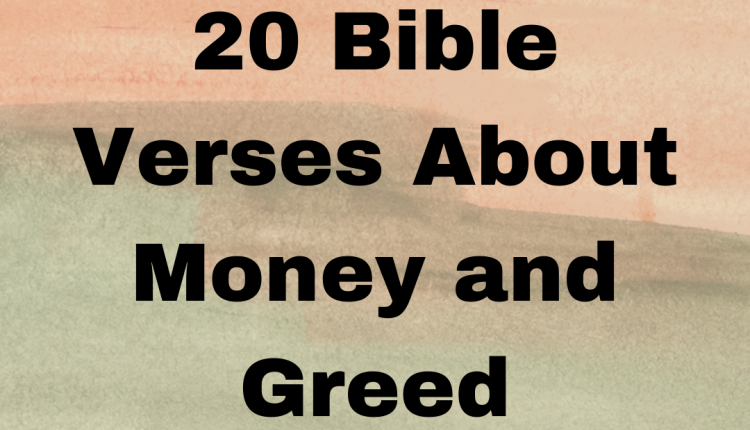 20 Bible Verses About Money and Greed

Today we will be dealing with 20 Bible verses about money and greed. The scripture said in the book of 1 Timothy 6:10 For the love of money is a root of all kinds of evil, for which some have strayed from the faith in their greediness, and pierced themselves through with many sorrows. This particular scripture has been misconstrued by many believers into believing money is evil. Money in its nature is not evil, but the love of money is the root of all evil. The love for money brings greed, when a man is greedy, he can do almost anything to make money.

Judas Iscariot was a greedy man that was why he sold his faith for money. When a man loves money, his allegiance will be toward anyone or anything that can fetch him money. That is why it was easy for Judas Iscariot to betray Jesus without thinking twice. Despite Samuel being a good boy who grew up to become a great Prophet, his sons were nothing like him. When Samuel became old to act as judge, he appointed his two sons to become judges. Joel and Abiah became lovers of money.

A greedy man will eventually become a traitor. He would betray those that trusted him for money. He would betray his family, his country, and even God just because he has been paid. The love for money is one of the major problems in the world today. Public office holders will lie to the people just so they can get their votes into office. Once they are voted into power, the love for money overshadows their sense of humanity. And because of greed, they would not care about the lives of the people whom they rule. That’s why an officeholder would embezzle public funds without remorse.

When men can control their love for money, greed will be reduced. And when greed is defeated, the world will be a better place to live in. For better understanding, we have compiled 20 Bible verses about money and greed.

Your conduct must be free from the love of money and you must be content with what you have, for he has said, “I will never leave you and I will never abandon you.” So we can say with confidence, “The Lord is my helper, and I will not be afraid. What can man do to me?”

But people who want to get rich keep toppling into temptation and are trapped by many stupid and harmful desires that plunge them into destruction and ruin. For the love of money is a root of all kinds of evil, and by craving it, some have wandered away from the faith and pierced themselves with many pains.

“No one can serve two masters, because either he will hate one and love the other, or be loyal to one and despise the other. You cannot serve God and riches!”

Whoever loves money will never have enough money. Whoever loves luxury will not be content with abundance. This also is pointless.

He told the people, “Be careful to guard yourselves from every kind of greed. Life is not about having a lot of material possessions.”

For everything that is in the world—the desire for fleshly gratification, the desire for possessions, and worldly arrogance—is not from the Father but is from the world.

“The greedy bring ruin to their households, but the one who hates bribes will live.”

“But these people set an ambush for themselves; they are trying to get themselves killed. Such is the fate of all who are greedy for money; it robs them of life.”

“They have become filled with every kind of wickedness, evil, greed and depravity. They are full of envy, murder, strife, deceit and malice. They are gossips.”

“As each one has received a gift, minister it to one another, as good stewards of the manifold grace of God.”

“Not that I speak from need, for I have learned to be content in whatever circumstances I am. I know how to get along with little, and I also know how to live in prosperity; in any and every circumstance I have learned the secret of being filled and going hungry, both of having abundance and suffering need. I can do all things through Him who strengthens me.”

“Having lost all sensitivity, they have given themselves over to sensuality so as to indulge in every kind of impurity, and they are full of greed. That, however, is not the way of life you learned.” when you heard about Christ and were taught in him in accordance with the truth that is in Jesus. You were taught, with regard to your former way of life, to put off your old self, which is being corrupted by its deceitful desires.”

“And let us not grow weary of doing good, for in due season we will reap, if we do not give up. 10 So then, as we have opportunity, let us do good to everyone, and especially to those who are of the household of faith.

Those who gather wealth by lying are wasting time. They are looking for death.

The faithful man will prosper with blessings, but whoever is in a hurry to get rich will not escape punishment.

Those who are greedy for unjust gain bring trouble into their homes, but the person who hates bribes will live.

For what does it profit a man to gain the whole world and forfeit his soul?