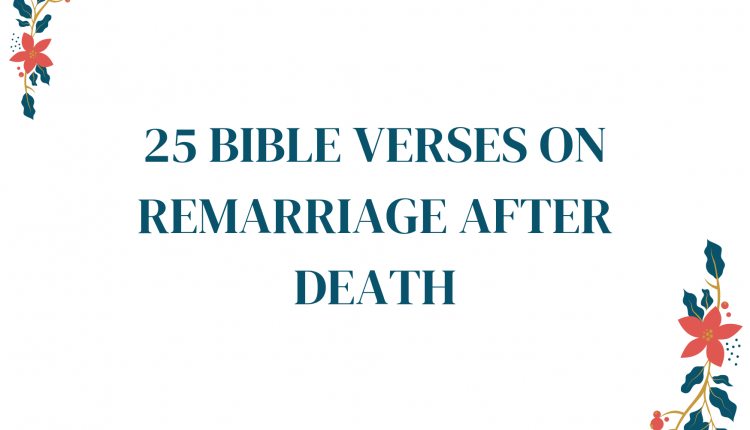 25 Bible Verses on Remarriage After Death

Today we will be dealing with 25 bible verses on remarriage after death. Is it right for a Christian man or woman to remarry after the death of their partner? Remember the scripture said in the book of Mark 10:7 For this reason a man will leave his father and mother and be united to his wife, and the two will become one flesh.’ So they are no longer two, but one flesh. Therefore what God has joined together, let no one separate.”

Death could bring an asunder between two couples joined together by God. There are so many opinions from different schools of thought about remarriage after death. While some people believe it is right for a man or woman to remarry after the death of their partner, others believe it is not right. There are Christians who might have misconstrued the whole concept of marriage as propounded by God. They think a man or woman who has just lost their partner is still one body one flesh with their dead partner so that makes remarriage inappropriate.

The concept of marriage was introduced for different reasons. The first reason is for a man not to be alone. Genesis 2:18 The LORD God said, “It is not good for the man to be alone. I will make a helper suitable for him.” A man was not created to live an isolated life. That’s one of the reasons why God created a woman for man. And the two are meant to be helpers. Another reason why God instituted marriage was for multiplication and dominion. But all of these will not be possible if a man or woman refuses to remarry after the death of their partner. If they are still within the age to make children, it is wise that they remarry because marriage also helps curb the act of fornication.

To know more about remarriage, we have highlighted 25 bible verses on remarriage after death. If you are curious to know what the scripture said about this concept, keep reading this blog.

For a married woman is bound by law to her husband while he lives, but if her husband dies she is released from the law of marriage.

He will wipe away every tear from their eyes, and death shall be no more, neither shall there be mourning, nor crying, nor pain anymore, for the former things have passed away.”

A wife is bound to her husband as long as he lives. But if her husband dies, she is free to be married to whom she wishes, only in the Lord.

For the wages of sin is death, but the free gift of God is eternal life in Christ Jesus our Lord.

Therefore a man shall leave his father and his mother and hold fast to his wife, and they shall become one flesh.

He answered, “Have you not read that he who created them from the beginning made them male and female, and said, ‘Therefore a man shall leave his father and his mother and hold fast to his wife, and the two shall become one flesh’? So they are no longer two but one flesh. What therefore God has joined together, let not man separate.”

Likewise, husbands, live with your wives in an understanding way, showing honor to the woman as the weaker vessel, since they are heirs with you of the grace of life, so that your prayers may not be hindered.

There came to him some Sadducees, those who deny that there is a resurrection, and they asked him a question, saying, “Teacher, Moses wrote for us that if a man’s brother dies, having a wife but no children, the man must take the widow and raise up offspring for his brother. Now there were seven brothers. The first took a wife, and died without children. And the second and the third took her, and likewise all seven left no children and died.

But Jesus answered them, “You are wrong, because you know neither the Scriptures nor the power of God. For in the resurrection they neither marry nor are given in marriage, but are like angels in heaven.

And I say to you: whoever divorces his wife, except for sexual immorality, and marries another, commits adultery.”

Husbands, love your wives, as Christ loved the church and gave himself up for her,

However, let each one of you love his wife as himself, and let the wife see that she respects her husband.

An excellent wife is the crown of her husband, but she who brings shame is like rottenness in his bones.

Then the Lord God said, “It is not good that the man should be alone; I will make him a helper fit for him.”

For I am sure that neither death nor life, nor angels nor rulers, nor things present nor things to come, nor powers, nor height nor depth, nor anything else in all creation, will be able to separate us from the love of God in Christ Jesus our Lord.

But if the unbelieving partner separates, let it be so. In such cases the brother or sister is not enslaved. God has called you to peace.

For in the resurrection they neither marry nor are given in marriage, but are like angels in heaven.

For your Maker is your husband, the Lord of hosts is his name; and the Holy One of Israel is your Redeemer, the God of the whole earth he is called.

(but if she does, she should remain unmarried or else be reconciled to her husband), and the husband should not divorce his wife.

25 Bible Verses About Being Thankful For The Little Things