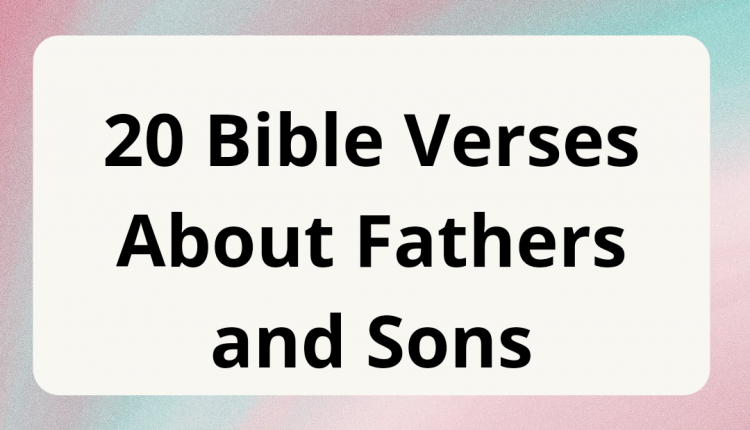 20 Bible Verses About Fathers and Sons

Today we will be dealing with 20 Bible verses about fathers and sons. Fathers and sons have a distinct significance in the scripture. Isaiah 9:6 For unto us a child is born, unto us a son, is given: and the government shall be upon his shoulder: and his name shall be called Wonderful, Counselor, The mighty God, The everlasting Father, The Prince of Peace.

The mantle of power and weakness, of rich and poor, of success and failure, of curse and breakthrough, is often passed from father to son. God is our father and we are His sons. The word son in the scripture has a connotative meaning. Son doesn’t mean the male gender alone. It means all God’s children. God often calls us sons as proof of our rebirth through the blood of Christ.

“I do not pray for these alone, but also for those who will believe in Me through their word; that they all may be one, as You, Father, are in Me, and I in You; that they also may be one in Us, that the world may believe that You sent Me. And the glory which You gave Me I have given them, that they may be one just as We are one: I in them, and You in Me; that they may be made perfect in one, and that the world may know that You have sent Me, and have loved them as You have loved Me.

Therefore the Jews sought all the more to kill Him, because He not only broke the Sabbath, but also said that God was His Father, making Himself equal with God. Then Jesus answered and said to them, “Most assuredly, I say to you, the Son can do nothing of Himself, but what He sees the Father do; for whatever He does, the Son also does in like manner.

All things have been delivered to Me by My Father, and no one knows the Son except the Father. Nor does anyone know the Father except the Son, and the one to whom the Son wills to reveal Him.

For to which of the angels did He ever say:
“ You are My Son,
Today I have begotten You”? And again:
“ I will be to Him a Father,
And He shall be to Me a Son”?

My son, do not despise the chastening of the LORD, Nor detest His correction; For whom the LORD loves He corrects, Just as a father the son in whom he delights.

And you, fathers, do not provoke your children to wrath, but bring them up in the training and admonition of the Lord.

Likewise, you who are younger, be subject to the elders. Clothe yourselves, all of you, with humility toward one another, for God opposes the proud but gives grace to the humble. Humble yourselves, therefore, under the mighty hand of God so that at the proper time he may exalt you.

Or which one of you, if his son asks him for bread, will give him a stone? Or if he asks for a fish, will give him a serpent? If you then, who are evil, know how to give good gifts to your children, how much more will your Father who is in heaven give good things to those who ask him!

Behold, children are a gift of the LORD, The fruit of the womb is a reward. Like arrows in the hand of a warrior, So are the children of one’s youth. How blessed is the man whose quiver is full of them; They will not be ashamed When they speak with their enemies in the gate.

The father of a righteous child has great joy; a man who fathers a wise son rejoices in him.

But while he was still a long way off, his father saw him and was filled with compassion for him; he ran to his son, threw his arms around him and kissed him.

As the Father has loved me, so have I loved you. Abide in my love.

My Father, who has given them to Me, is greater than all; and no one is able to snatch them out of the Father’s hand.

I in them and You in Me, that they may be perfected in unity, so that the world may know that You sent Me, and loved them, even as You have loved Me.

If ye endure chastening, God dealeth with you as with sons; for what son is he whom the father chasteneth not?

For God so loved the world, that he gave his only begotten Son, that whosoever believeth in him should not perish, but have everlasting life.

20 Bible Verses About Caring For Others in Need

25 Daily Bible Verses For You