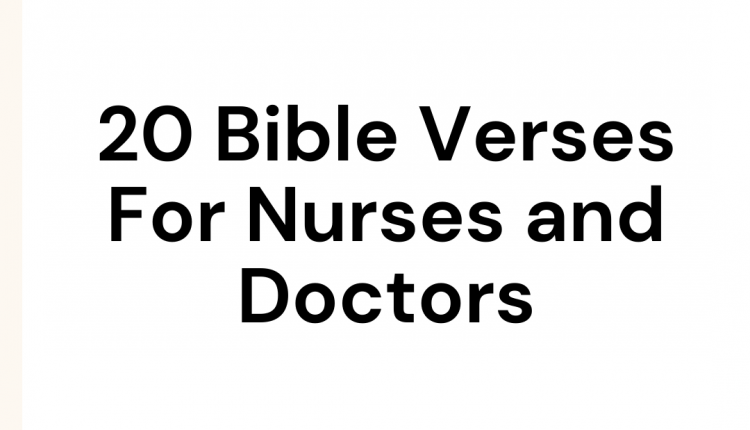 20 Bible Verses For Nurses and Doctors

Today we will be dealing with 20 Bible verses for nurses and doctors. The scripture is a good source of inspiration for all health care workers. As nurses and doctors, your spiritual life must be kept optimally. While you take care of people through the use of science-related means, your spiritual life also needs treatment. The word of God is a lamp unto our feet and a light unto our path. As a believer who is into health, studying the word will give your life direction.

As you devout your life and time to help people live a healthy life, the Lord wants to take care of your life too. He wants to give you direction on things you should do and how you should do them to yield a better result. You are a child of light and the scripture said let your light shine so bright that people will glorify your Father in heaven.

There is something about you that must be different. Nurses and Doctors are not just like other occupations. They are lifesavers. Their job is quite synonymous with the ministry of Christ Jesus. The scripture called him a great healer. He went from one place to another doing good. He healed all manner of diseases and illnesses. Your line of profession is different. We have compiled a list of 20 Bible verses for nurses and doctors.

These bible verses will boost your spiritual life. As you give strength and hope to the sick and weary the Lord will replenish your spirit man. Study these Bible verses.

Kings shall be your foster fathers, and their queens your nursing mothers. With their faces to the ground they shall bow down to you, and lick the dust of your feet. Then you will know that I am the Lord; those who wait for me shall not be put to shame.

Jonathan, the son of Saul, had a son who was crippled in his feet. He was five years old when the news about Saul and Jonathan came from Jezreel, and his nurse took him up and fled, and as she fled in her haste, he fell and became lame. And his name was Mephibosheth.

In the thirty-ninth year of his reign Asa became diseased in his feet. His disease was severe, yet even in his disease he did not seek the Lord, but the physicians. So Asa slept with his fathers, having died in the forty-first year of his reign.

A woman who had had a hemorrhage for twelve years, and had endured much at the hands of many physicians, and had spent all that she had and was not helped at all, but rather had grown worse— after hearing about Jesus, she came up in the crowd behind Him and touched His cloak.
For she thought, “If I just touch His garments, I will get well.” Immediately the flow of her blood was dried up; and she felt in her body that she was healed of her affliction.

Have I conceived all this people? have I begotten them, that thou shouldest say unto me, Carry them in thy bosom, as a nursing father beareth the sucking child, unto the land which thou swarest unto their fathers?

And when he had called unto him his twelve disciples, he gave them power against unclean spirits, to cast them out, and to heal all manner of sickness and all manner of disease.

Elkanah her husband said to her, “Do what seems best to you; wait until you have weaned him; only, may the Lord establish his word.” So the woman remained and nursed her son until she weaned him.

And Pharaoh’s daughter said to her, “Take this child away and nurse him for me, and I will give you your wages.” So the woman took the child and nursed him.

And it came to pass on a certain day, as he was teaching, that there were Pharisees and doctors of the law sitting by, which were come out of every town of Galilee, and Judaea, and Jerusalem: and the power of the Lord was present to heal them.

And God wrought special miracles by the hands of Paul: So that from his body were brought unto the sick handkerchiefs or aprons, and the diseases departed from them, and the evil spirits went out of them.

Is any sick among you? let him call for the elders of the church; and let them pray over him, anointing him with oil in the name of the Lord: And the prayer of faith shall save the sick, and the Lord shall raise him up; and if he have committed sins, they shall be forgiven him.

And said, If thou wilt diligently hearken to the voice of the LORD thy God, and wilt do that which is right in his sight, and wilt give ear to his commandments, and keep all his statutes, I will put none of these diseases upon thee, which I have brought upon the Egyptians: for I am the LORD that healeth thee.

And when Jesus heard it, he said to them, “Those who are well have no need of a physician, but those who are sick. I came not to call the righteous, but sinners.

But he was wounded for our transgressions; he was crushed for our iniquities; upon him was the chastisement that brought us peace, and with his stripes we are healed.

For I will restore health to you, and your wounds I will heal, declares the Lord, because they have called you an outcast: ‘It is Zion, for whom no one cares!

But when he heard it, he said, “Those who are well have no need of a physician, but those who are sick. Go and learn what this means, ‘I desire mercy, and not sacrifice.’ For I came not to call the righteous, but sinners.

For he wounds, but he binds up; he shatters, but his hands heal.

And he went throughout all Galilee, teaching in their synagogues and proclaiming the gospel of the kingdom and healing every disease and every affliction among the people.

25 Daily Bible Verses For You

20 Bible Verses To Pray For Children as God’s…

20 Bible Verses To Pray to Break The Yoke of Barrenness