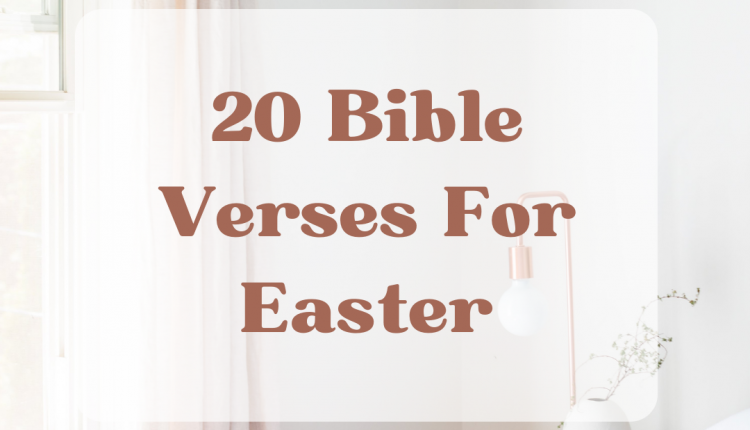 Today we will be dealing with 20 bible verses for Easter. Easter is a period of reconciliation with God. It is a period when we remember the great sacrifice Christ made with his life on the cross of Calvary. And beyond the sacrifice, it also teaches us about the undying love of the father towards us.

The scripture said while we were yet sinners, Christ died for us. Jesus took the blame for our sin and paid for it on the cross. Many people may wonder why Christ has to die when God is powerful to destroy sin and the devil who is the mastermind of all evil things.

It is important to know that the creation of the earth is based on principles. Our God is highly principled. That’s why there are principles to everything on earth. The rule of saving a soul is letting another go. God couldn’t have bypassed that principle. That’s why Christ had to sacrifice himself for the redemption of man.

Meanwhile, it is not only God that loves mankind. Christ also loves man. That’s why he could take upon himself the burden of pain and death. Easter teaches us that as we have been saved through the death and resurrection of Christ, we must work toward saving other people.

Also, it teaches us that we have power over death through Christ Jesus. John 3:16 For God so loved the world that He gave His only begotten son that whoever believes in Him will not perish but have everlasting life. Christ died so we don’t perish and that’s what Easter is about.

We have compiled a list of 20 Bible verses for Easter to further increase our knowledge.

So they departed quickly from the tomb with fear and great joy, and ran to tell his disciples.  And behold, Jesus met them and said, “Greetings!” And they came up and took hold of his feet and worshiped him. Then Jesus said to them, “Do not be afraid; go and tell my brothers to go to Galilee, and there they will see me.

On the evening of that day, the first day of the week, the doors being locked where the disciples were for fear of the Jews, Jesus came and stood among them and said to them, “Peace be with you.”  When he had said this, he showed them his hands and his side. Then the disciples were glad when they saw the Lord. Jesus said to them again, “Peace be with you. As the Father has sent me, even so I am sending you.” And when he had said this, he breathed on them and said to them, “Receive the Holy Spirit. If you forgive the sins of any, they are forgiven them; if you withhold forgiveness from any, it is withheld.”  Now Thomas, one of the Twelve, called the Twin, was not with them when Jesus came.

He presented himself alive to them after his suffering by many proofs, appearing to them during forty days and speaking about the kingdom of God … And when he had said these things, as they were looking on, he was lifted up, and a cloud took him out of their sight.

Blessed be the God and Father of our Lord Jesus Christ! According to his great mercy, he has caused us to be born again to a living hope through the resurrection of Jesus Christ from the dead, to an inheritance that is imperishable, undefiled, and unfading, kept in heaven for you, who by God’s power are being guarded through faith for a salvation ready to be revealed in the last time.

And if Christ has not been raised, then our preaching is in vain and your faith is in vain. We are even found to be misrepresenting God, because we testified about God that he raised Christ, whom he did not raise if it is true that the dead are not raised. For if the dead are not raised, not even Christ has been raised.  And if Christ has not been raised, your faith is futile and you are still in your sins.  Then those also who have fallen asleep in Christ have perished.  If in Christ we have hope in this life only, we are of all people most to be pitied. But in fact Christ has been raised from the dead, the first fruits of those who have fallen asleep.

Therefore we are buried with him by baptism into death: that like as Christ was raised up from the dead by the glory of the Father, even so we also should walk in the newness of life.

For I am not ashamed of the gospel of Christ; for it is the power of God unto salvation to everyone that believeth; to the Jew first and also to the Greek. For therein is the righteousness of God revealed from faith to faith; as it is written, the just shall live by faith.

Therefore being justified by faith, we have peace with God through our Lord Jesus Christ; by whom also we have access by faith into this grace wherein we stand, and rejoice in hope of the glory of God.

Who hath delivered us from the power of darkness and hath translated us into the kingdom of his dear Son in whom we have redemption through his blood, even the forgiveness of sins.

In whom we have redemption through his blood, the forgiveness of sins, according to the riches of his grace, where he hath abounded towards us in all wisdom and prudence.

And ye are complete in him, which is the head of all principalities and power.

He is not here; he has risen! Remember how he told you, while he was still with you in Galilee: ‘The Son of Man must be delivered over to the hands of sinners, be crucified and on the third day be raised again.

You killed the author of life, but God raised him from the dead. We are witnesses of this.

It was now about noon, and darkness came over the whole land until three in the afternoon, for the sun stopped shining. And the curtain of the temple was torn in two. Jesus called out with a loud voice, “Father, into your hands I commit my spirit.” When he had said this, he breathed his last. The centurion, seeing what had happened, praised God and said, “Surely this was a righteous man.

He then began to teach them that the Son of Man must suffer many things and be rejected by the elders, the chief priests and the teachers of the law, and that he must be killed and after three days rise again.

But God demonstrates his own love for us in this: While we were still sinners, Christ died for us.

Jesus said to her, “I am the resurrection and the life. The one who believes in me will live, even though they die.

Jesus answered them, “Destroy this temple, and I will raise it again in three days.

If you declare with your mouth, “Jesus is Lord,” and believe in your heart that God raised him from the dead, you will be saved.