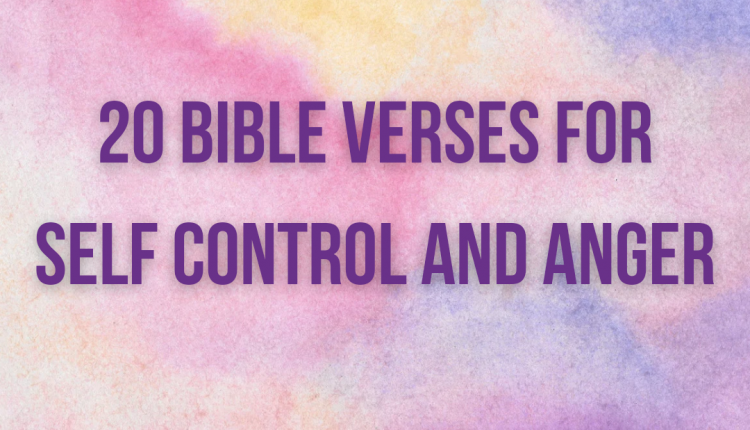 20 Bible Verses For Self Control and Anger

Need I say that Christian means people like Christ. The first set of people called Christians was called in Antioch after the people of the city had studied them. They have seen that these people act and behave like Christ. When we bear the name Christian, we must act like it.

Anger is a destroyer. The enemy has used it against many people. Moses could not enter the promised land because of anger. He disobeyed the instruction given by God after the people led him to anger. And because of his misbehavior, the Lord stopped him from entering the land of Canaan.

Until we learn to control our anger, the enemy will continue to use it against us. We have curated a list of 20 Bible verses for self-control and anger. If you wish to have self-control over anger, use the following bible verses to help you gain control.

Peace I leave with you; my peace I give to you. Not as the world gives do I give to you. Let not your hearts be troubled, neither let them be afraid.

Repent therefore, and turn again, that your sins may be blotted out, that times of refreshing may come from the presence of the Lord, and that he may send the Christ appointed for you, Jesus, whom heaven must receive until the time for restoring all the things about which God spoke by the mouth of his holy prophets long ago.

But in your hearts honor Christ the Lord as holy, always being prepared to make a defense to anyone who asks you for a reason for the hope that is in you; yet do it with gentleness and respect.

For though by this time you ought to be teachers, you need someone to teach you again the basic principles of the oracles of God. You need milk, not solid food, for everyone who lives on milk is unskilled in the word of righteousness, since he is a child. But solid food is for the mature, for those who have their powers of discernment trained by constant practice to distinguish good from evil.

Therefore I tell you, do not be anxious about your life, what you will eat or what you will drink, nor about your body, what you will put on. Is not life more than food, and the body more than clothing? Look at the birds of the air: they neither sow nor reap nor gather into barns, and yet your heavenly Father feeds them. Are you not of more value than they? And which of you by being anxious can add a single hour to his span of life? And why are you anxious about clothing? Consider the lilies of the field, how they grow: they neither toil nor spin, yet I tell you, even Solomon in all his glory was not arrayed like one of these.

For before those days there was no wage for man or any wage for beast, neither was there any safety from the foe for him who went out or came in, for I set every man against his neighbor.

The brothers immediately sent Paul and Silas away by night to Berea, and when they arrived they went into the Jewish synagogue. Now these Jews were more noble than those in Thessalonica; they received the word with all eagerness, examining the Scriptures daily to see if these things were so.

Know this, my beloved brothers: let every person be quick to hear, slow to speak, slow to anger.

Be not quick in your spirit to become angry, for anger lodges in the bosom of fools.

A man without self-control is like a city broken into and left without walls.

Be angry and do not sin; do not let the sun go down on your anger, and give no opportunity to the devil.

Whoever keeps his mouth and his tongue keeps himself out of trouble.

Good sense makes one slow to anger, and it is his glory to overlook an offense.

Gentleness, self-control; against such things there is no law.

Correcting his opponents with gentleness. God may perhaps grant them repentance leading to a knowledge of the truth.

20 Bible Verses About The Will of God

20 Bible Verses About Covenant of Blessings