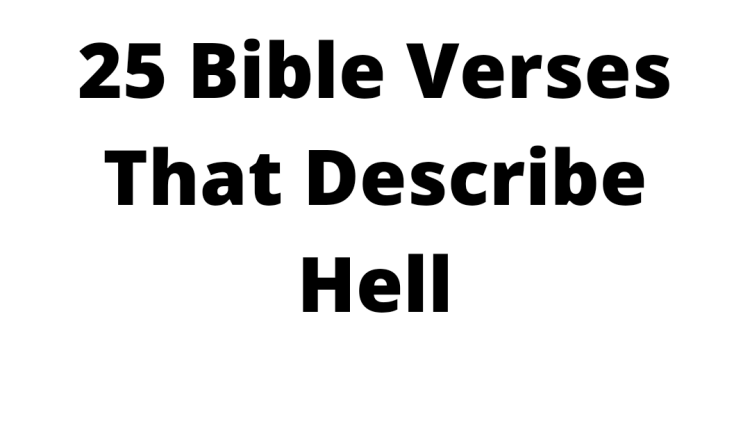 Today we will be dealing with 25 bible verses that describe hell. The scripture thought us that there are two places that people go to after death. The heaven which is prepared by Jesus Christ for the saints and the hell which the devil himself Lord over.

Most times many people live their lives here on earth as they have forgotten there is a home beyond. You see men go about like they own everything. You see men act like they are in charge of everything including death. It is perceived that if only we get a better description of heaven or hell, it might engineer us to act right.

Hell, for what it is worth is a place of torment. It is a place filled with pain and agony. That’s why you must do everything within your power to ensure you don’t end up in hell. While the bible offers so many verses that best describe what hell looked like, it also offers countless verses on how to avert the torment of hell.

To better understand why you must do everything not to end up in hell, we have curated a list of 25 bible verses that describe hell. Ensure you study these bible verses as they will help you to know what hell really looks like.

If your eye causes you to stumble, throw it out; it is better for you to enter the kingdom of God with one eye, than, having two eyes, to be cast into hell, where their worm does not die, and the fire is not quenched.

But when the Son of Man comes in His glory, and all the angels with Him, then He will sit on His glorious throne. All the nations will be gathered before Him; and He will separate them from one another, as the shepherd separates the sheep from the goats; and He will put the sheep on His right, and the goats on the left.

Strive to enter through the narrow door; for many, I tell you, will seek to enter and will not be able. Once the head of the house gets up and shuts the door, and you begin to stand outside and knock on the door, saying, ‘Lord, open up to us!’ then He will answer and say to you, ‘I do not know where you are from.’ Then you will begin to say, ‘We ate and drank in Your presence, and You taught in our streets’; and He will say, ‘I tell you, I do not know where you are from; depart from Me, all you evildoers.’ In that place there will be weeping and gnashing of teeth when you see Abraham and Isaac and Jacob and all the prophets in the kingdom of God, but yourselves being thrown out.

And the beast was seized, and with him the false prophet who performed the signs in his presence, by which he deceived those who had received the mark of the beast and those who worshiped his image; these two were thrown alive into the lake of fire which burns with brimstone.

Again, the kingdom of heaven is like a dragnet cast into the sea, and gathering fish of every kind; and when it was filled, they drew it up on the beach; and they sat down and gathered the good fish into containers, but the bad they threw away. So it will be at the end of the age; the angels will come forth and take out the wicked from among the righteous, and will throw them into the furnace of fire; in that place there will be weeping and gnashing of teeth.

Then another angel, a third one, followed them, saying with a loud voice, “If anyone worships the beast and his image, and receives a mark on his forehead or on his hand, he also will drink of the wine of the wrath of God, which is mixed in full strength in the cup of His anger; and he will be tormented with fire and brimstone in the presence of the holy angels and in the presence of the Lamb. And the smoke of their torment goes up forever and ever; they have no rest day and night, those who worship the beast and his image, and whoever receives the mark of his name.

Then He will also say to those on His left, ‘Depart from Me, accursed ones, into the eternal fire which has been prepared for the devil and his angels.

For if God did not spare angels when they sinned, but cast them into hell and committed them to pits of darkness, reserved for judgment.

but the sons of the kingdom will be cast out into the outer darkness; in that place there will be weeping and gnashing of teeth.

Do not fear those who kill the body but are unable to kill the soul; but rather fear Him who is able to destroy both soul and body in hell.

And the tongue is a fire, the very world of iniquity; the tongue is set among our members as that which defiles the entire body, and sets on fire the course of our life, and is set on fire by hell.

Nor do they lie beside the fallen heroes of the uncircumcised, who went down to Sheol with their weapons of war and whose swords were laid under their heads; but the punishment for their iniquity rested on their bones, though the terror of these heroes was once in the land of the living.

Furthermore, wine betrays the haughty man,
So that he does not stay at home.
He enlarges his appetite like Sheol,
And he is like death, never satisfied.
He also gathers to himself all nations
And collects to himself all peoples.

And the devil who deceived them was thrown into the lake of fire and brimstone, where the beast and the false prophet are also; and they will be tormented day and night forever and ever.

save others, snatching them out of the fire; and on some have mercy with fear, hating even the garment polluted by the flesh.

And angels who did not keep their own domain, but abandoned their proper abode, He has kept in eternal bonds under darkness for the judgment of the great day.

The wicked will return to Sheol,
Even all the nations who forget God.

And I saw the beast and the kings of the earth and their armies assembled to make war against Him who sat on the horse and against His army.

20 Bible Verses To Pray Before Traveling