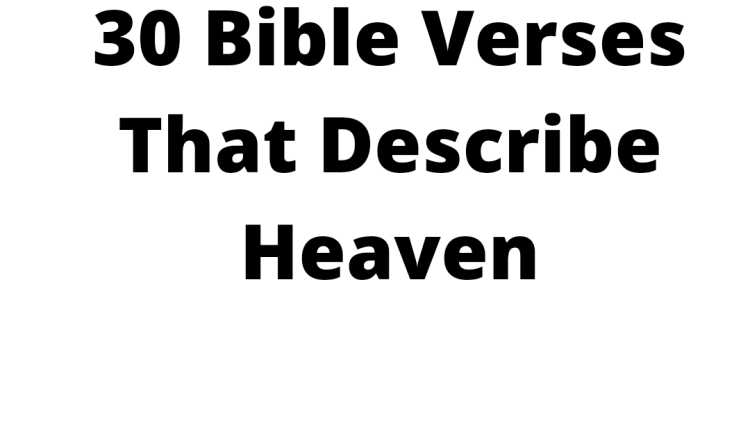 Today we will be dealing with 30 Bible verses that describe heaven. When Jesus was leaving, he said to his Apostles, I’m going to prepare a place for you. Heaven is the place where Christ promised to prepare for us. As it is, heaven is the last hope of our salvation. This is a place where there is complete fairness and balance. Every man is treated equally.

According to the scripture, heaven is also known as paradise. It is a city that is glamorously designed with matchless sophistication. If you have imagined any beautiful city in the world, you have imagined what heaven looks like.

It is important to make heaven, especially as believers. The scripture recorded that heaven is the place that God has prepared for His people. While hell is a place the devil and his angels reside. Heaven and hell are both eternal. So you have a choice to make whether to spend eternity in paradise or hell.

For what it is worth, it would be nice if we all make heaven. Perhaps if you get a perfect description of what heaven looks like, it might increase your desire to be in that city. Imagine a city made with crystal gold. Imagine a community where the sun doesn’t shine nor does the moon. The light of the city is illuminating it emanates from an everlasting source.

How beautiful would it be to live in such a city? We have curated a list of 30 bible verses that describe heaven. Take time to study them.

Because, if you confess with your mouth that Jesus is Lord and believe in your heart that God raised him from the dead, you will be saved. For with the heart one believes and is justified, and with the mouth one confesses and is saved. For the Scripture says, “Everyone who believes in him will not be put to shame.” For there is no distinction between Jew and Greek; for the same Lord is Lord of all, bestowing his riches on all who call on him. For “everyone who calls on the name of the Lord will be saved.

He will wipe away every tear from their eyes, and death shall be no more, neither shall there be mourning, nor crying, nor pain anymore, for the former things have passed away.

In my Father’s house are many rooms. If it were not so, would I have told you that I go to prepare a place for you?

Then the angel showed me the river of the water of life, bright as crystal, flowing from the throne of God and of the Lamb through the middle of the street of the city; also, on either side of the river, the tree of life with its twelve kinds of fruit, yielding its fruit each month. The leaves of the tree were for the healing of the nations. No longer will there be anything accursed, but the throne of God and of the Lamb will be in it, and his servants will worship him. They will see his face, and his name will be on their foreheads. And night will be no more. They will need no light of lamp or sun, for the Lord God will be their light, and they will reign forever and ever.

But as it is, they desire a better country, that is, a heavenly one. Therefore God is not ashamed to be called their God, for he has prepared for them a city.

No one has ascended into heaven except he who descended from heaven, the Son of Man.

And I saw no temple in the city, for its temple is the Lord God the Almighty and the Lamb. And the city has no need of sun or moon to shine on it, for the glory of God gives it light, and its lamp is the Lamb. By its light will the nations walk, and the kings of the earth will bring their glory into it, and its gates will never be shut by day—and there will be no night there. They will bring into it the glory and the honor of the nations.

Then I saw a new heaven and a new earth, for the first heaven and the first earth had passed away, and the sea was no more. And I saw the holy city, new Jerusalem, coming down out of heaven from God, prepared as a bride adorned for her husband. And I heard a loud voice from the throne saying, “Behold, the dwelling place of God is with man. He will dwell with them, and they will be his people, and God himself will be with them as their God. He will wipe away every tear from their eyes, and death shall be no more, neither shall there be mourning, nor crying, nor pain anymore, for the former things have passed away.” And he who was seated on the throne said, “Behold, I am making all things new.” Also he said, “Write this down, for these words are trustworthy and true.

Then I saw a new heaven and a new earth, for the first heaven and the first earth had passed away, and the sea was no more.

But nothing unclean will ever enter it, nor anyone who does what is detestable or false, but only those who are written in the Lamb’s book of life.

After this I looked, and behold, a door standing open in heaven! And the first voice, which I had heard speaking to me like a trumpet, said, “Come up here, and I will show you what must take place after this.” At once I was in the Spirit, and behold, a throne stood in heaven, with one seated on the throne. And he who sat there had the appearance of jasper and carnelian, and around the throne was a rainbow that had the appearance of an emerald. Around the throne were twenty-four thrones, and seated on the thrones were twenty-four elders, clothed in white garments, with golden crowns on their heads. From the throne came flashes of lightning, and rumblings and peals of thunder, and before the throne were burning seven torches of fire, which are the seven spirits of God.

I give them eternal life, and they will never perish, and no one will snatch them out of my hand.

See that you do not despise one of these little ones. For I tell you that in heaven their angels always see the face of my Father who is in heaven.

Fear not, little flock, for it is your Father’s good pleasure to give you the kingdom.

He who has an ear, let him hear what the Spirit says to the churches. To the one who conquers I will grant to eat of the tree of life, which is in the paradise of God.

And there is salvation in no one else, for there is no other name under heaven given among men by which we must be saved.

Then the righteous will shine like the sun in the kingdom of their Father. He who has ears, let him hear.

It is he who made the earth by his power, who established the world by his wisdom, and by his understanding stretched out the heavens.

For behold, I create new heavens and a new earth, and the former things shall not be remembered or come into mind.

Then God’s temple in heaven was opened, and the ark of his covenant was seen within his temple. There were flashes of lightning, rumblings, peals of thunder, an earthquake, and heavy hail.

By the word of the Lord the heavens were made, and by the breath of his mouth all their host.

But our citizenship is in heaven, and from it we await a Savior, the Lord Jesus Christ.

But Jesus said, “Let the little children come to me and do not hinder them, for to such belongs the kingdom of heaven.

Heaven is my throne, and the earth is my footstool. What kind of house will you build for me, says the Lord, or what is the place of my rest?

For thus says the Lord, who created the heavens (he is God!), who formed the earth and made it (he established it; he did not create it empty, he formed it to be inhabited!): “I am the Lord, and there is no other.

Now I know that the Lord saves his anointed; he will answer him from his holy heaven with the saving might of his right hand.