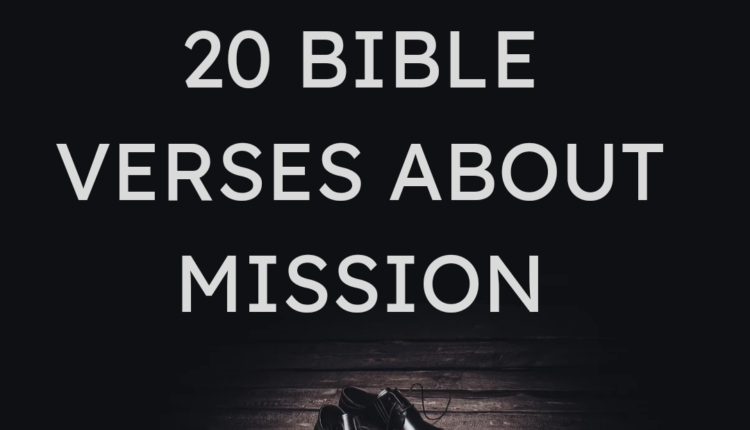 Today we will be dealing with 20 bible verses about the mission. Every man is on a mission on earth. However, not everyone is able to accomplish their mission, that’s why there are so many destinies that were never fulfilled.

A mission can never be accomplished without a vision. The reason why many people have not been able to fulfill their purpose is that they have no clear vision of their mission on earth. And when the purpose of something is unknown, abuse is inevitable.

Christ was on a mission on earth. He came to restore man to the original state that God designed for a man. Despite all the challenges, temptations, and tribulations that he faced here on earth, none of them were able to stop him from accomplishing that mission. Because Christ had a clear vision of his mission, He understood everything that He was meant to do per time.

Similarly in our lives, we must have a clear vision of our mission on earth. If not, we will be tossed around by challenges, temptations, and tribulations. Little wonder the book of Habakkuk 2:2 Then the LORD replied: “Write down the revelation and make it plain on tablets so that a herald may run with it. Until we start running by the vision, our mission might not be fulfilled.

We have curated a list of 20 Bible verses about missions. Study them to understand how to know your mission and how to accomplish them.

Jesus was going through all the cities and villages, teaching in their synagogues and proclaiming the gospel of the kingdom, and healing every kind of disease and every kind of sickness. Seeing the people, He felt compassion for them, because they were distressed and dispirited like sheep without a shepherd.

While they were ministering to the Lord and fasting, the Holy Spirit said, “Set apart for Me Barnabas and Saul for the work to which I have called them.”  Then, when they had fasted and prayed and laid their hands on them, they sent them away.

“For the love of Christ controls us, because we have concluded this: that one has died for all, therefore all have died; and he died for all, that those who live might no longer live for themselves but for him who for their sake died and was raised.

knowing that you were not redeemed with perishable things like silver or gold from your futile way of life inherited from your forefathers, but with precious blood, as of a lamb unblemished and spotless, the blood of Christ. For He was foreknown before the foundation of the world, but has appeared in these last times for the sake of you.

Have this attitude in yourselves which was also in Christ Jesus, who, although He existed in the form of God, did not regard equality with God a thing to be grasped, but emptied Himself, taking the form of a bond-servant, and being made in the likeness of men. Being found in appearance as a man, He humbled Himself by becoming obedient to the point of death, even death on a cross.

God, after He spoke long ago to the fathers in the prophets in many portions and in many ways, in these last days has spoken to us in His Son, whom He appointed heir of all things, through whom also He made the world. And He is the radiance of His glory and the exact representation of His nature, and upholds all things by the word of His power. When He had made purification of sins, He sat down at the right hand of the Majesty on high.

Truly, truly, I say to you, we speak of what we know and testify of what we have seen, and you do not accept our testimony. If I told you earthly things and you do not believe, how will you believe if I tell you heavenly things? No one has ascended into heaven, but He who descended from heaven: the Son of Man.

whom God displayed publicly as a propitiation in His blood through faith. This was to demonstrate His righteousness, because in the forbearance of God He passed over the sins previously committed; for the demonstration, I say, of His righteousness at the present time, so that He would be just and the justifier of the one who has faith in Jesus.

For if by the transgression of the one, death reigned through the one, much more those who receive the abundance of grace and of the gift of righteousness will reign in life through the One, Jesus Christ. So then as through one transgression there resulted condemnation to all men, even so through one act of righteousness there resulted justification of life to all men.

And coming to Him as to a living stone which has been rejected by men, but is choice and precious in the sight of God, you also, as living stones, are being built up as a spiritual house for a holy priesthood, to offer up spiritual sacrifices acceptable to God through Jesus Christ.

He says, “It is too small a thing that You should be My Servant
To raise up the tribes of Jacob and to restore the preserved ones of Israel;
I will also make You a light of the nations
So that My salvation may reach to the end of the earth.

I say to you that many will come from east and west, and recline at the table with Abraham, Isaac and Jacob in the kingdom of heaven;

I have other sheep, which are not of this fold; I must bring them also, and they will hear My voice; and they will become one flock with one shepherd.

Now when Jesus heard this, He marveled at him, and turned and said to the crowd that was following Him, “I say to you, not even in Israel have I found such great faith.

But you will receive power when the Holy Spirit has come upon you; and you shall be My witnesses both in Jerusalem, and in all Judea and Samaria, and even to the remotest part of the earth.

Rescuing you from the Jewish people and from the Gentiles, to whom I am sending you, to open their eyes so that they may turn from darkness to light and from the dominion of Satan to God, that they may receive forgiveness of sins and an inheritance among those who have been sanctified by faith in Me.

For even the Son of Man did not come to be served, but to serve, and to give His life a ransom for many.