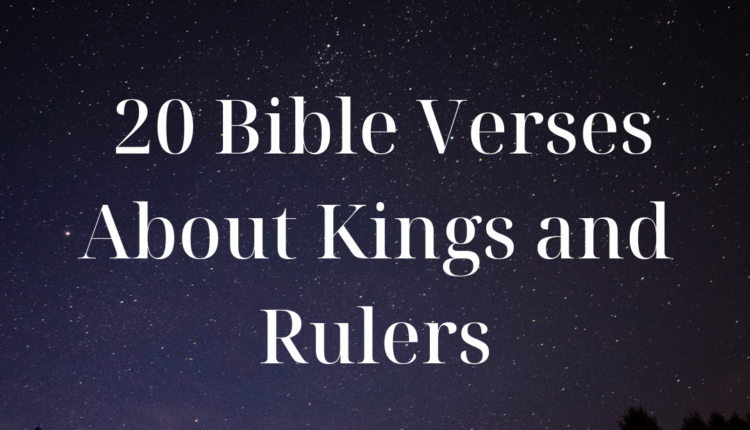 20 Bible Verses About Kings and Rulers

Today we will be dealing with 20 Bible verses about kings and rulers.

All humans exhibit God’s design, intellect and power remember we were originally created in His image. Many of us even believe that since our Father in Heaven is a King, we also have the power to dominate and rule. A ruler is one who has been given an opportunity to rule,guide and guard others, also serrving others out of Christ’s interests and to achieve God’s purposes too.

A Divine King or ruler is not concerned in worldly ways of achieving success, such as the love of money or power. Jesus Himself spoke against this and Apostle Paul when He wrote to the churches and told them the book of the Lord has been made available for learning and for finding answers when you’re lost or needs help.

A ruler guides and make sure his citizens are well behaved and not follow the ways of the world which seems right but at the end is destruction especially in a Christian settings which is why we will be talking about 20 Bible verses that will help a ruler successfully lead it’s followers to God’s satisfaction.

Do we remember the story of the unforgiven king in the bible whom have refused to tamper justice with mercy after he was shown mercy by Jesus Himself, inorder not to be a selfish and self centered one, the bible verses below will help and guide you through this journey.

First of all, then, I urge that supplications, prayers, intercessions, and thanksgivings be made for all people, for kings and all who are in high positions, that we may lead a peaceful and quiet life, godly and dignified in every way.

Jehoshaphat his son reigned in his place and strengthened himself against Israel. He placed forces in all the fortified cities of Judah and set garrisons in the land of Judah, and in the cities of Ephraim that Asa his father had captured. The Lord was with Jehoshaphat, because he walked in the earlier ways of his father David. He did not seek the Baals, but sought the God of his father and walked in his commandments, and not according to the practices of Israel. Therefore the Lord established the kingdom in his hand. And all Judah brought tribute to Jehoshaphat, and he had great riches and honor.

And God spoke all these words, saying, “I am the Lord your God, who brought you out of the land of Egypt, out of the house of slavery. “You shall have no other gods before me. “You shall not make for yourself a carved image, or any likeness of anything that is in heaven above, or that is in the earth beneath, or that is in the water under the earth. You shall not bow down to them or serve them, for I the Lord your God am a jealous God, visiting the iniquity of the fathers on the children to the third and the fourth generation of those who hate me.

Therefore let us leave the elementary doctrine of Christ and go on to maturity, not laying again a foundation of repentance from dead works and of faith toward God, and of instruction about washings, the laying on of hands, the resurrection of the dead, and eternal judgment. And this we will do if God permits. For it is impossible, in the case of those who have once been enlightened, who have tasted the heavenly gift, and have shared in the Holy Spirit, and have tasted the goodness of the word of God and the powers of the age to come.

For rulers are not a terror to good conduct, but to bad. Would you have no fear of the one who is in authority? Then do what is good, and you will receive his approval.

And from Jesus Christ the faithful witness, the firstborn of the dead, and the ruler of kings on earth. To him who loves us and has freed us from our sins by his blood.

Let every person be subject to the governing authorities. For there is no authority except from God, and those that exist have been instituted by God. Therefore whoever resists the authorities resists what God has appointed, and those who resist will incur judgment.

Go to the ant, O sluggard; consider her ways, and be wise. Without having any chief, officer, or ruler, she prepares her bread in summer and gathers her food in harvest.

The king’s heart is a stream of water in the hand of the Lord; he turns it wherever he will.

By justice a king builds up the land, but he who exacts gifts tears it down.

Even in your thoughts, do not curse the king, nor in your bedroom curse the rich, for a bird of the air will carry your voice, or some winged creature tell the matter.

And he said to them, “The kings of the Gentiles exercise lordship over them, and those in authority over them are called benefactors.

And I saw the beast and the kings of the earth with their armies gathered to make war against him who was sitting on the horse and against his army.

20 Bible Verses About Pain And Death