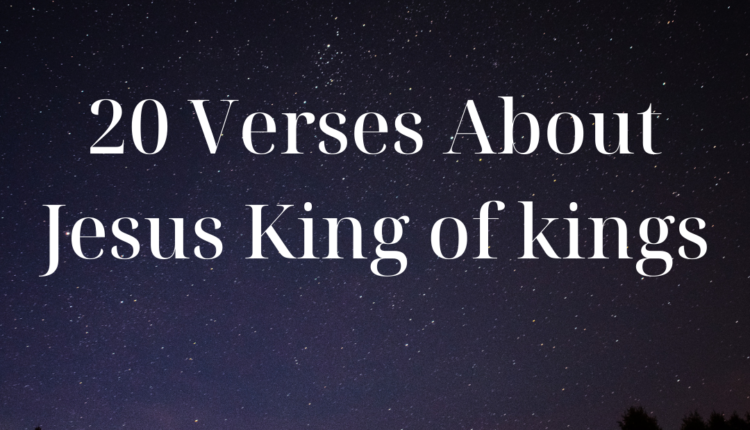 20 Verses About Jesus King of kings

Today we will be dealing with 20 verses about Jesus King of kings.

In the bible Jesus was called King of Kings many times. It means He has the power , authority, freedom, might and can do many great things. This is like saying”who is like unto the oh Lord, amongst the gods who is like thee” and we all know the answer to that is no one. His authority is unquestionable and not controversial which is one of the reasons He is called King of Kings and Lord of lords.

When Jesus is called “King of kings, it means that, in the end, all other rulers who didn’t obey His commandments will be conquered and punished, and He alone will reign as the supreme King and Lord of all the earth. There is no power, no king, and no lord who can oppose Him and win.

Do we remember the many signs and wonders Jesus did, how He commanded the raging storm to be still and it immediately became peaceful. It shows us that only a man filled with authority can do such which means He has the power to control even nature, this shows us how great He is and how no one come close to Him. Although Jesus is very humble still He is regarded as King of kings. The following bible passages will tell us more about how Jesus is regarded as King of kings.

Which he will display at the proper time—he who is the blessed and only Sovereign, the King of kings and Lord of lords.

Then I saw heaven opened, and behold, a white horse! The one sitting on it is called Faithful and True, and in righteousness he judges and makes war. His eyes are like a flame of fire, and on his head are many diadems, and he has a name written that no one knows but himself. He is clothed in a robe dipped in blood, and the name by which he is called is The Word of God. And the armies of heaven, arrayed in fine linen, white and pure, were following him on white horses. From his mouth comes a sharp sword with which to strike down the nations, and he will rule them with a rod of iron. He will tread the winepress of the fury of the wrath of God the Almighty.

They will make war on the Lamb, and the Lamb will conquer them, for he is Lord of lords and King of kings, and those with him are called and chosen and faithful.

So that at the name of Jesus every knee should bow, in heaven and on earth and under the earth.

And we know that the Son of God has come and has given us understanding, so that we may know him who is true; and we are in him who is true, in his Son Jesus Christ. He is the true God and eternal life.

But grow in the grace and knowledge of our Lord and Savior Jesus Christ. To him be the glory both now and to the day of eternity. Amen.

And when he had said these things, as they were looking on, he was lifted up, and a cloud took him out of their sight. And while they were gazing into heaven as he went, behold, two men stood by them in white robes, and said, “Men of Galilee, why do you stand looking into heaven? This Jesus, who was taken up from you into heaven, will come in the same way as you saw him go into heaven.

Jesus answered him, “If anyone loves me, he will keep my word, and my Father will love him, and we will come to him and make our home with him.

Let not your hearts be troubled. Believe in God; believe also in me. In my Father’s house are many rooms. If it were not so, would I have told you that I go to prepare a place for you? And if I go and prepare a place for you, I will come again and will take you to myself, that where I am you may be also. And you know the way to where I am going.” Thomas said to him, “Lord, we do not know where you are going. How can we know the way?

Jesus said to them, “Truly, truly, I say to you, before Abraham was, I am.

And Jesus came and said to them, “All authority in heaven and on earth has been given to me.

Then will appear in heaven the sign of the Son of Man, and then all the tribes of the earth will mourn, and they will see the Son of Man coming on the clouds of heaven with power and great glory.

Then if anyone says to you, ‘Look, here is the Christ!’ or ‘There he is!’ do not believe it. For false christs and false prophets will arise and perform great signs and wonders, so as to lead astray, if possible, even the elect. See, I have told you beforehand. So, if they say to you, ‘Look, he is in the wilderness,’ do not go out. If they say, ‘Look, he is in the inner rooms,’ do not believe it. For as the lightning comes from the east and shines as far as the west, so will be the coming of the Son of Man.

For truly, I say to you, until heaven and earth pass away, not an iota, not a dot, will pass from the Law until all is accomplished.

Behold, I send my messenger, and he will prepare the way before me. And the Lord whom you seek will suddenly come to his temple; and the messenger of the covenant in whom you delight, behold, he is coming, says the Lord of hosts.

You are my witnesses,” declares the Lord, “and my servant whom I have chosen, that you may know and believe me and understand that I am he. Before me no god was formed, nor shall there be any after me.

Who has performed and done this, calling the generations from the beginning? I, the Lord, the first, and with the last; I am he.

For in this way there will be richly provided for you an entrance into the eternal kingdom of our Lord and Savior Jesus Christ.

Bible Verses About Pain In Love