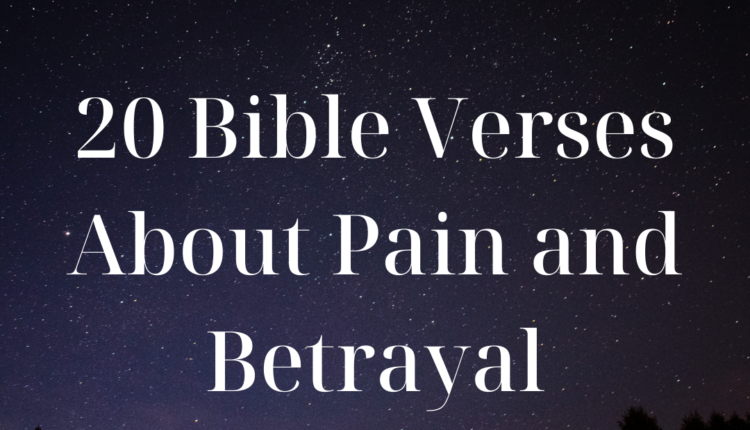 20 Bible Verses About Pain and Betrayal

The feeling of betrayal is quite deep. The one who was betrayed will feel sense of lost, anger and also inability to trust anyone the most. This is because it’s possible we were betrayed by the one we love the most.

We must have felt the hurtful sting of betrayal at one point in our lives which might end up becoming deeply rooted in our heart and might be really difficult to forget and also forgive. Pain is a feeling that we have the choice of carrying with us for the rest of our lives or learning to to let go of it and heal and move on.

The bible has told us how to forgive people who have offended us even though it isn’t easy to do so. The question now is how do we handle and forgive those who betrayed us?. The first thing that ever comes to our mind is revenge, but we must remember that the Lord said revenge is of God , He will fight for us.

We must give all our problems to the Lord. If we keep thinking about the betrayal it will only build up more anger in us, let’s leave it to God as He will calm the storm within us. We should also remember God was betrayed too and He forgives us at all times.

The bible verses below will guide us on how to deal with our pains.

Then Satan entered into Judas called Iscariot, who was of the number of the twelve. He went away and conferred with the chief priests and officers how he might betray him to them. And they were glad, and agreed to give him money. So he consented and sought an opportunity to betray him to them in the absence of a crowd.

Put no trust in a neighbor; have no confidence in a friend; guard the doors of your mouth from her who lies in your arms; for the son treats the father with contempt, the daughter rises up against her mother, the daughter-in-law against her mother-in-law; a man’s enemies are the men of his own house. But as for me, I will look to the Lord; I will wait for the God of my salvation; my God will hear me.

And when they heard it, they were glad and promised to give him money. And he sought an opportunity to betray him.

They were filled with all manner of unrighteousness, evil, covetousness, malice. They are full of envy, murder, strife, deceit, maliciousness. They are gossips.

Then one of the twelve, whose name was Judas Iscariot, went to the chief priests and said, “What will you give me if I deliver him over to you?” And they paid him thirty pieces of silver. And from that moment he sought an opportunity to betray him.

Then he came to the disciples and said to them, “Sleep and take your rest later on. See, the hour is at hand, and the Son of Man is betrayed into the hands of sinners. Rise, let us be going; see, my betrayer is at hand.” While he was still speaking, Judas came, one of the twelve, and with him a great crowd with swords and clubs, from the chief priests and the elders of the people. Now the betrayer had given them a sign, saying, “The one I will kiss is the man; seize him.” And he came up to Jesus at once and said, “Greetings, Rabbi!” And he kissed him.

Their throat is an open grave; they use their tongues to deceive.” “The venom of asps is under their lips.

Then Judas Iscariot, who was one of the twelve, went to the chief priests in order to betray him to them.

I will look with favor on the faithful in the land, that they may dwell with me; he who walks in the way that is blameless shall minister to me. No one who practices deceit shall dwell in my house; no one who utters lies shall continue before my eyes. Morning by morning I will destroy all the wicked in the land, cutting off all the evildoers from the city of the Lord.

Cain spoke to Abel his brother. And when they were in the field, Cain rose up against his brother Abel and killed him.

And when Abner returned to Hebron, Joab took him aside into the midst of the gate to speak with him privately, and there he struck him in the stomach, so that he died, for the blood of Asahel his brother.

For the Son of Man goes as it has been determined, but woe to that man by whom he is betrayed.

The Son of Man goes as it is written of him, but woe to that man by whom the Son of Man is betrayed! It would have been better for that man if he had not been born.

Then when Judas, his betrayer, saw that Jesus was condemned, he changed his mind and brought back the thirty pieces of silver to the chief priests and the elders, saying, “I have sinned by betraying innocent blood.” They said, “What is that to us? See to it yourself.” And throwing down the pieces of silver into the temple, he departed, and he went and hanged himself.

For I hear many whispering. Terror is on every side! “Denounce him! Let us denounce him!” say all my close friends, watching for my fall. “Perhaps he will be deceived; then we can overcome him and take our revenge on him.

Then Judas Iscariot, who was one of the twelve, went to the chief priests in order to betray him to them. And when they heard it, they were glad and promised to give him money. And he sought an opportunity to betray him.

Judas, who would betray him, answered, “Is it I, Rabbi?” He said to him, “You have said so.

And then many will fall away and betray one another and hate one another.

And she said to him, “How can you say, ‘I love you,’ when your heart is not with me? You have mocked me these three times, and you have not told me where your great strength lies.

After saying these things, Jesus was troubled in his spirit, and testified, “Truly, truly, I say to you, one of you will betray me.

20 Bible Verses For Wealth and Prosperity

20 Most Powerful Verses of All Time