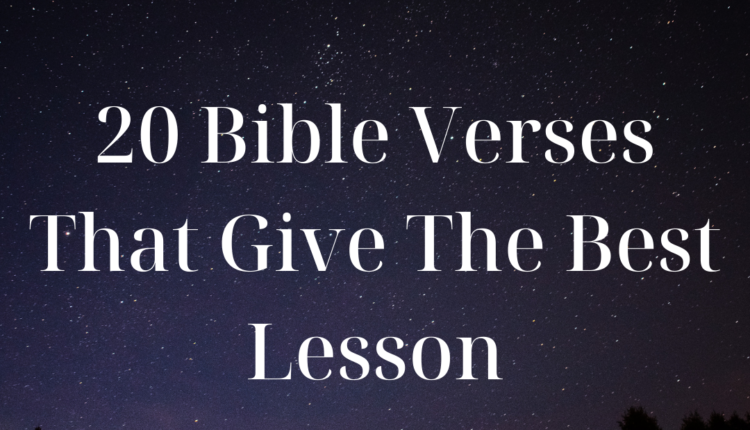 20 Bible Verses That Give The Best Lesson

Today we will be dealing with 20 Bible verses that give the best lesson. We all need some life lessons to keep us moving. To excel in life, we need more knowledge and understanding. Interestingly, the scripture has so many lessons to offer to us all.

We have curated a list of 20 Bible verses that give the best lesson we need in our day-to-day life. When we are equipped with the right lesson, it helps us understand God better and it gives us leverage over the devil. If only Esau understood that there was more to life than finding food to quench his hunger, he would not have sold his birthright to Jacob.

If only Samson knew that obedience is more profitable than sacrifice, he would have refrained from marrying a woman from a strange land where he had been warned not to marry from. Different life experiences from the scripture teach us to better understand how to live our lives appropriately. That’s why these lessons are very important to our lives as humans and as believers.

Find time to study these lessons.

If a man steals an ox or a sheep, and kills it or sells it, he shall repay five oxen for an ox, and four sheep for a sheep. If a thief is found breaking in and is struck so that he dies, there shall be no bloodguilt for him, but if the sun has risen on him, there shall be bloodguilt for him. He shall surely pay. If he has nothing, then he shall be sold for his theft. If the stolen beast is found alive in his possession, whether it is an ox or a donkey or a sheep, he shall pay double. “If a man causes a field or vineyard to be grazed over, or lets his beast loose and it feeds in another man’s field, he shall make restitution from the best in his own field and in his own vineyard.

But if anyone does not provide for his relatives, and especially for members of his household, he has denied the faith and is worse than an unbeliever.

Then Jesus said to him, “Put your sword back into its place. For all who take the sword will perish by the sword. Do you think that I cannot appeal to my Father, and he will at once send me more than twelve legions of angels? But how then should the Scriptures be fulfilled, that it must be so?

You have heard that it was said, ‘An eye for an eye and a tooth for a tooth.’ But I say to you, Do not resist the one who is evil. But if anyone slaps you on the right cheek, turn to him the other also.

All Scripture is breathed out by God and profitable for teaching, for reproof, for correction, and for training in righteousness, that the man of God may be competent, equipped for every good work.

For I the Lord do not change; therefore you, O children of Jacob, are not consumed.

To the choirmaster. Of the Sons of Korah. According to Alamoth. A Song. God is our refuge and strength, a very present help in trouble.

Because you did not serve the Lord your God with joyfulness and gladness of heart, because of the abundance of all things, therefore you shall serve your enemies whom the Lord will send against you, in hunger and thirst, in nakedness, and lacking everything. And he will put a yoke of iron on your neck until he has destroyed you.

Heal the sick, raise the dead, cleanse lepers, cast out demons. You received without paying; give without pay. Acquire no gold nor silver nor copper for your belts.

Let him not trust in emptiness, deceiving himself, for emptiness will be his payment.

So Moses spoke to the people, saying, “Arm men from among you for the war, that they may go against Midian to execute the Lord‘s vengeance on Midian.

Children, obey your parents in the Lord, for this is right.