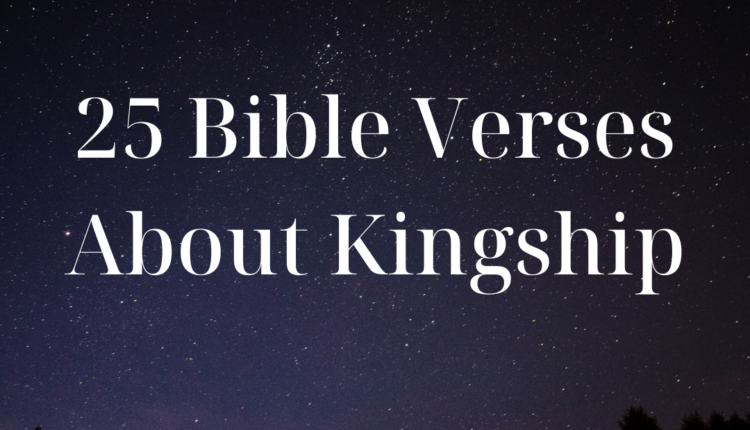 Today we will be dealing with 25 Bible verses about kingship. As Christian, we are from the clan of kings and priests. We are meant to live our lives like kings. The scripture makes us understand that God is the king of kings. The supreme kingmaker is our father, we should walk in the majestic of His beautiful name. However, it is rather unfortunate that we are not like that. Many believers have not keyed into the covenant of God’s kingship.

This explains why we see many believers living like paupers. Walking around like slaves in the empire built by their father. We have lost out the inheritance to ignorance and sin. Until the day the prodigal son in the scripture realized that he’s been living life even low below what the slaves of his father are living, he never made move to return home.

Even those that are not considered sons are living a more prosperous life than we that are sons of the king. It is time we returned to our father. Until you realize that you are from the generation of monarchs, your royal status will continue to stay hidden. We have compiled a list of Bible verses about Kingship.

These scriptural verses will help us understand the supremacy of God the father. His royalty as kings and our status of sons and daughters of his majesty.

Nevertheless, the people refused to listen to the voice of Samuel, and they said, “No, but there shall be a king over us, that we also may be like all the nations, that our king may judge us and go out before us and fight our battles.” Now after Samuel had heard all the words of the people, he repeated them in the Lord’s hearing. The Lord said to Samuel, “Listen to their voice and appoint them a king.” So Samuel said to the men of Israel, “Go every man to his city.

So all the elders of Israel came to the king at Hebron, and King David made a covenant with them before the Lord at Hebron; then they anointed David king over Israel. David was thirty years old when he became king, and he reigned forty years. At Hebron he reigned over Judah seven years and six months, and in Jerusalem he reigned thirty-three years over all Israel and Judah.

As for you, if you will walk before Me as your father David walked, in integrity of heart and uprightness, doing according to all that I have commanded you and will keep My statutes and My ordinances, then I will establish the throne of your kingdom over Israel forever, just as I promised to your father David, saying, ‘You shall not lack a man on the throne of Israel.

As for you, if you walk before Me as your father David walked, even to do according to all that I have commanded you, and will keep My statutes and My ordinances, then I will establish your royal throne as I covenanted with your father David, saying, ‘You shall not lack a man to be ruler in Israel.

When you saw that Nahash the king of the sons of Ammon came against you, you said to me, ‘No, but a king shall reign over us,’ although the Lord your God was your king. Now therefore, here is the king whom you have chosen, whom you have asked for, and behold, the Lord has set a king over you. If you will fear the Lord and serve Him, and listen to His voice and not rebel against the command of the Lord, then both you and also the king who reigns over you will follow the Lord your God. If you will not listen to the voice of the Lord, but rebel against the command of the Lord, then the hand of the Lord will be against you, as it was against your fathers.

The king answered Daniel and said, “Surely your God is a God of gods and a Lord of kings and a revealer of mysteries, since you have been able to reveal this mystery.

Now it came about in those days, when there was no king in Israel, that there was a certain Levite staying in the remote part of the hill country of Ephraim, who took a concubine for himself from Bethlehem in Judah.

Then all the elders of Israel gathered together and came to Samuel at Ramah; and they said to him, “Behold, you have grown old, and your sons do not walk in your ways. Now appoint a king for us to judge us like all the nations.” But the thing was displeasing in the sight of Samuel when they said, “Give us a king to judge us.” And Samuel prayed to the Lord. The Lord said to Samuel, “Listen to the voice of the people in regard to all that they say to you, for they have not rejected you, but they have rejected Me from being king over them. Like all the deeds which they have done since the day that I brought them up from Egypt even to this day—in that they have forsaken Me and served other gods—so they are doing to you also. Now then, listen to their voice; however, you shall solemnly warn them and tell them of the procedure of the king who will reign over them.

No one can serve two masters, for either he will hate the one and love the other, or he will be devoted to the one and despise the other. You cannot serve God and money.

Then all the tribes of Israel came to David at Hebron and said, “Behold, we are your bone and flesh. In times past, when Saul was king over us, it was you who led out and brought in Israel. And the Lord said to you, ‘You shall be shepherd of my people Israel, and you shall be prince over Israel.’” So all the elders of Israel came to the king at Hebron, and King David made a covenant with them at Hebron before the Lord, and they anointed David king over Israel.

You shall not bow down to them or serve them; for I the Lord your God am a jealous God, visiting the iniquity of the fathers on the children to the third and fourth generation of those who hate me.

And God said, “This is the sign of the covenant that I make between me and you and every living creature that is with you, for all future generations:

And Jesus came and said to them, “All authority in heaven and on earth has been given to me.

Blessed and holy is the one who shares in the first resurrection! Over such the second death has no power, but they will be priests of God and of Christ, and they will reign with him for a thousand years.

And the great dragon was thrown down, that ancient serpent, who is called the devil and Satan, the deceiver of the whole world—he was thrown down to the earth, and his angels were thrown down with him.

The one who conquers, I will grant him to sit with me on my throne, as I also conquered and sat down with my Father on his throne.

He is without father or mother or genealogy, having neither beginning of days nor end of life, but resembling the Son of God he continues a priest forever.

Then comes the end, when he delivers the kingdom to God the Father after destroying every rule and every authority and power.

And you have made them a kingdom and priests to our God, and they shall reign on the earth.

Simeon Peter, a servant and apostle of Jesus Christ, To those who have obtained a faith of equal standing with ours by the righteousness of our God and Savior Jesus Christ:

20 Bible Verses Everyone Must Know