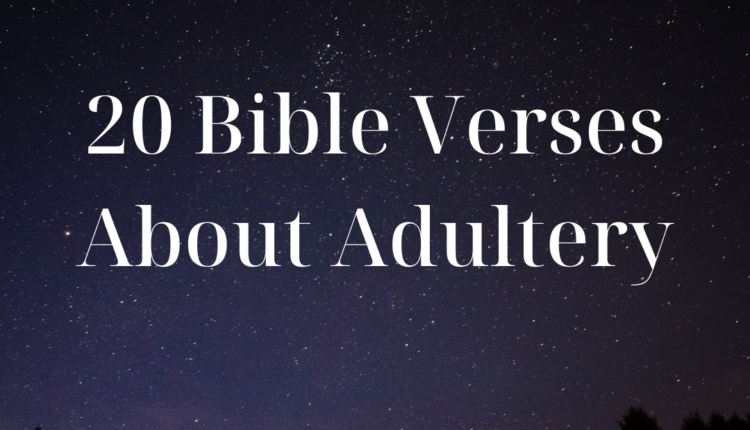 Today we will be dealing with 20 bible verses about Adultery.

Adultery is committing a sexual sin between someone that is married and an unmarried person. Jesus even said it in one of His teaching that thou shall not commit adultery. He placed more emphasis on it even after God already told us in the old testament that adultery is bad and it’s one of the commandments He gave us that we must obey.

The bible clearly condemns the act of adultery. It’s unheard of that a Christian who is supposed to teach people and lead souls to Christ are the ones misbehaving and even making the unbelievers see Christianity as a joke. Christians are ambassadors of Christ, they were first called Christians in Antioch when the people saw that they were behaving Christlike. Therefore the attribute we should emulate are that of Christ. Sex was designed to happen between a man and a woman that are legally married and joined by God.

Adultery violates the commitment made before man and God in your marriage to be faithful to each other since the matrimonial home was blessed by God himself. God commandments that said we shouldn’t commit adultery shows that God wants His people to exercise sexual purity and chastity within marriage.

It was also said, ‘Whoever divorces his wife, let him give her a certificate of divorce.’ But I say to you that everyone who divorces his wife, except on the ground of sexual immorality, makes her commit adultery, and whoever marries a divorced woman commits adultery.

To preserve you from the evil woman, from the smooth tongue of the adulteress. Do not desire her beauty in your heart, and do not let her capture you with her eyelashes; for the price of a prostitute is only a loaf of bread, but a married woman hunts down a precious life. Can a man carry fire next to his chest and his clothes not be burned? Or can one walk on hot coals and his feet not be scorched?

They said to him, “Teacher, this woman has been caught in the act of adultery. Now in the Law Moses commanded us to stone such women. So what do you say?” This they said to test him, that they might have some charge to bring against him. Jesus bent down and wrote with his finger on the ground. And as they continued to ask him, he stood up and said to them, “Let him who is without sin among you be the first to throw a stone at her.” And once more he bent down and wrote on the ground.

For this is the will of God, your sanctification: that you abstain from sexual immorality; that each one of you know how to control his own body in holiness and honor, not in the passion of lust like the Gentiles who do not know God.

I have seen your abominations, your adulteries and neighings, your lewd whorings, on the hills in the field. Woe to you, O Jerusalem! How long will it be before you are made clean?

For you may be sure of this, that everyone who is sexually immoral or impure, or who is covetous (that is, an idolater), has no inheritance in the kingdom of Christ and God.

And if she divorces her husband and marries another, she commits adultery.

Behold, I will throw her onto a sickbed, and those who commit adultery with her I will throw into great tribulation, unless they repent of her works.