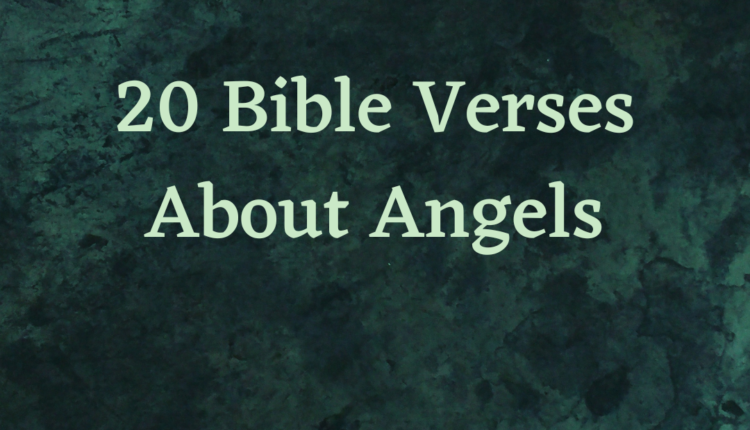 Today we will be dealing with 20 bible verses about Angels.

Angels are called messengers of God. They’re known to deliver messages to human here on earth. Examples are when an angel appeared to Joseph countless times to tell him about the birth of Jesus, where Jesus should be born,how to protect Jesus.

Another example is when an Angel visited Zachariah to tell him about the birth of his son and also the name to be given to him when the son was born (John). We also saw many Instances In the old testaments where God sent His angels to warn or bring good news to His own people.

Angels are from God. They are believed to be carrier of good news. For so many years we have heard different description of how the angels look like, some said they’re in human form and some said they have a special type of body. But the most important thing to note is that angel sometimes serves as intermediary between Man and His God.

We also have them in human form too. Someone that hasn’t eaten since morning but was lucky to meet a friend to give him foodstuff that will last him for days will say with a smile on his face that his friend was the angel that God sent to save him from hunger strike.

In today’s topic we will be mentioning some bible verses that talks about the importance of angel in heaven and some names of other angels in the bible and how significant their role is in every human beings lives . Angels are powerful. Some angels we are familiar with are Angel Micheal who we know from the bible stories we have heard that defeated the devil and conquered Him.

We also know Angel Gabriel who we all know to be carrier of good news . Remember Angel Gabriel appeared to Mary the mother of Jesus to tell her about the good news God had for her then. We pray that as we read the bible verses below our own Angel that will bring our good news will visit us soon in Jesus name.

Then I looked, and I heard around the throne and the living creatures and the elders the voice of many angels, numbering myriads of myriads and thousands of thousands, saying with a loud voice, “Worthy is the Lamb who was slain, to receive power and wealth and wisdom and might and honor and glory and blessing!

Then I saw another mighty angel coming down from heaven, wrapped in a cloud, with a rainbow over his head, and his face was like the sun, and his legs like pillars of fire. He had a little scroll open in his hand. And he set his right foot on the sea, and his left foot on the land, and called out with a loud voice, like a lion roaring. When he called out, the seven thunders sounded. And when the seven thunders had sounded, I was about to write, but I heard a voice from heaven saying, “Seal up what the seven thunders have said, and do not write it down.” And the angel whom I saw standing on the sea and on the land raised his right hand to heaven.

And God sent the angel to Jerusalem to destroy it, but as he was about to destroy it, the Lord saw, and he relented from the calamity. And he said to the angel who was working destruction, “It is enough; now stay your hand.” And the angel of the Lord was standing by the threshing floor of Ornan the Jebusite.

In the sixth month the angel Gabriel was sent from God to a city of Galilee named Nazareth, to a virgin betrothed to a man whose name was Joseph, of the house of David. And the virgin’s name was Mary. And he came to her and said, “Greetings, O favored one, the Lord is with you!” But she was greatly troubled at the saying, and tried to discern what sort of greeting this might be. And the angel said to her, “Do not be afraid, Mary, for you have found favor with God.

And when the angel stretched out his hand toward Jerusalem to destroy it, the Lord relented from the calamity and said to the angel who was working destruction among the people, “It is enough; now stay your hand.” And the angel of the Lord was by the threshing floor of Araunah the Jebusite.

In all their affliction he was afflicted, and the angel of his presence saved them; in his love and in his pity he redeemed them; he lifted them up and carried them all the days of old.

And he was in the wilderness forty days, being tempted by Satan. And he was with the wild animals, and the angels were ministering to him.

And no wonder, for even Satan disguises himself as an angel of light.

But when Herod died, behold, an angel of the Lord appeared in a dream to Joseph in Egypt.

Bless the Lord, O you his angels, you mighty ones who do his word, obeying the voice of his word!

And the angels who did not stay within their own position of authority, but left their proper dwelling, he has kept in eternal chains under gloomy darkness until the judgment of the great day.

And he will send out his angels with a loud trumpet call, and they will gather his elect from the four winds, from one end of heaven to the other.

Behold, I send an angel before you to guard you on the way and to bring you to the place that I have prepared.

Do you think that I cannot appeal to my Father, and he will at once send me more than twelve legions of angels?

For in the resurrection they neither marry nor are given in marriage, but are like angels in heaven.

For it is written, “‘He will command his angels concerning you, to guard you.

Then the devil left him, and behold, angels came and were ministering to him.

Now an angel of the Lord said to Philip, “Rise and go toward the south to the road that goes down from Jerusalem to Gaza.” This is a desert place.

But concerning that day and hour no one knows, not even the angels of heaven, nor the Son, but the Father only.

Let no one disqualify you, insisting on asceticism and worship of angels, going on in detail about visions, puffed up without reason by his sensuous mind.