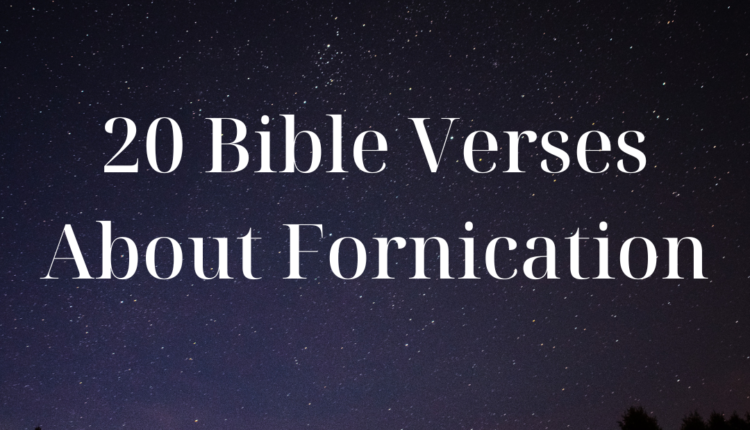 Today we will be dealing with 20 bible verses about Fornication

Keeping your mind on God and not the flesh will save you from death, shame, guilt , sexually transmitted diseases, and even unwanted pregnancy. God’s will for us all is to wait till we get married to receive God’s special blessings in our marriage.

Many youths today fornicate due to peer pressure from the world. Make the right choices today and stay away from bad friends that might lure you into doing what’s not God’s will for you. Fornication is against God’s commandments. Marriage is the appointed time by God for the union of man and woman in Which God blesses them with children. Sex was designed by God to happen between Man and woman that are legally married.

Fornication is a sin against your flesh and your soul and we know what it does to our spirit. It brings us back to where we started from and we know how dangerous going back to our old ways is for us ,it really endangers our Christian growth and can make us fall short of God’s grace and glory.

Do not fornicate, remember the bible says we shouldn’t defile our marriage bed and uphold chastity. It’s against your belief as a Christian as even the bible says flee from every appearance of the devil.

Flee from sexual immorality. Every other sin a person commits is outside the body, but the sexually immoral person sins against his own body. Or do you not know that your body is a temple of the Holy Spirit within you, whom you have from God? You are not your own, for you were bought with a price. So glorify God in your body.

You are doing the works your father did.” They said to him, “We were not born of sexual immorality. We have one Father—even God.” Jesus said to them, “If God were your Father, you would love me, for I came from God and I am here. I came not of my own accord, but he sent me.

It is actually reported that there is sexual immorality among you, and of a kind that is not tolerated even among pagans, for a man has his father’s wife.

Food is meant for the stomach and the stomach for food”—and God will destroy both one and the other. The body is not meant for sexual immorality, but for the Lord, and the Lord for the body.

And he said, “What comes out of a person is what defiles him. For from within, out of the heart of man, come evil thoughts, sexual immorality, theft, murder, adultery, coveting, wickedness, deceit, sensuality, envy, slander, pride, foolishness. All these evil things come from within, and they defile a person.

Put to death therefore what is earthly in you: sexual immorality, impurity, passion, evil desire, and covetousness, which is idolatry.

But I have a few things against you: you have some there who hold the teaching of Balaam, who taught Balak to put a stumbling block before the sons of Israel, so that they might eat food sacrificed to idols and practice sexual immorality.

If there is a betrothed virgin, and a man meets her in the city and lies with her, then you shall bring them both out to the gate of that city, and you shall stone them to death with stones, the young woman because she did not cry for help though she was in the city, and the man because he violated his neighbor’s wife. So you shall purge the evil from your midst.

Or do you not know that the unrighteous will not inherit the kingdom of God? Do not be deceived: neither the sexually immoral, nor idolaters, nor adulterers, nor men who practice homosexuality.

For this is the will of God, your sanctification: that you abstain from sexual immorality

For his judgments are true and just; for he has judged the great prostitute who corrupted the earth with her immorality, and has avenged on her the blood of his servants.

I gave her time to repent, but she refuses to repent of her sexual immorality.

20 Bible Verses About Lion of The Tribe of Judah