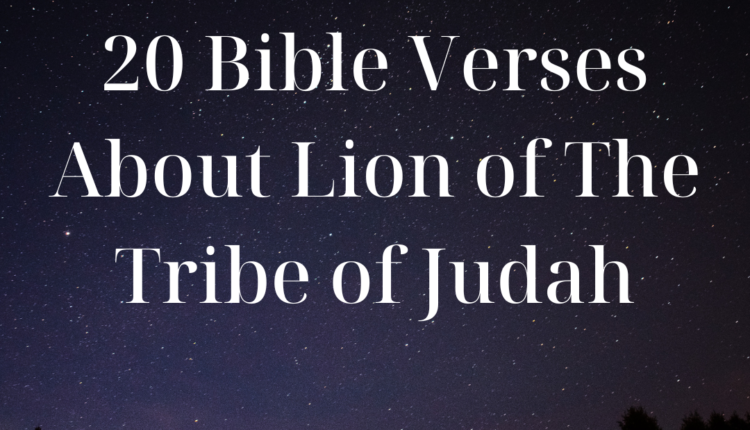 20 Bible Verses About Lion of The Tribe of Judah

Today we will be dealing with 20 bible verses about Lion of the tribe of Judah.

Lion is one of the biggest cat in the world. It has so many importance and symbolizes so many things. Lion symbolizes strength, authority, pride, majesty, kingship, protection, wisdom, ferocity and so on.

Lion are know to be bold, fearless and confident. There’s even a popular saying that Christians should take on some of these qualities of lion. Jesus has been called many times the lion of the tribe of Judah. He is popularly referred to as a lion because He is courageous, filled with strength. He even devoured death to show how powerful He is.

There are many times Jesus has fought both known and unknown battles for us and won them. Referencing Jesus as the lion of the tribe of Judah points that He’s a conqueror. Also the bible told us Jesus is from the linage of conquerors and victorious descendants. This helps gives hope and strength to Christians in our journey as we know that there’s someone that’s there for us all the time so therefore we know Him to be our deliverer and protector.

The bible says Jesus is the only one worthy enough to open the scroll therefore Jesus is the lion of the tribe of Judah. Read the following bible verses for more understanding.

And one of the elders said to me, “Weep no more; behold, the Lion of the tribe of Judah, the Root of David, has conquered, so that he can open the scroll and its seven seals.

For thus the Lord said to me, “As a lion or a young lion growls over his prey, and when a band of shepherds is called out against him he is not terrified by their shouting or daunted at their noise, so the Lord of hosts will come down to fight on Mount Zion and on its hill.

Judah is a lion’s cub; from the prey, my son, you have gone up. He stooped down; he crouched as a lion and as a lioness; who dares rouse him? The scepter shall not depart from Judah, nor the ruler’s staff from between his feet, until tribute comes to him; and to him shall be the obedience of the peoples.

After this I looked, and behold, a door standing open in heaven! And the first voice, which I had heard speaking to me like a trumpet, said, “Come up here, and I will show you what must take place after this.” At once I was in the Spirit, and behold, a throne stood in heaven, with one seated on the throne. And he who sat there had the appearance of jasper and carnelian, and around the throne was a rainbow that had the appearance of an emerald. Around the throne were twenty-four thrones, and seated on the thrones were twenty-four elders, clothed in white garments, with golden crowns on their heads. From the throne came flashes of lightning, and rumblings and peals of thunder, and before the throne were burning seven torches of fire, which are the seven spirits of God.

Let not your hearts be troubled. Believe in God; believe also in me. In my Father’s house are many rooms. If it were not so, would I have told you that I go to prepare a place for you? And if I go and prepare a place for you, I will come again and will take you to myself, that where I am you may be also. And you know the way to where I am going.” Thomas said to him, “Lord, we do not know where you are going. How can we know the way?

The first was like a lion and had eagles’ wings. Then as I looked its wings were plucked off, and it was lifted up from the ground and made to stand on two feet like a man, and the mind of a man was given to it.

Judah, your brothers shall praise you; your hand shall be on the neck of your enemies; your father’s sons shall bow down before you. Judah is a lion’s cub; from the prey, my son, you have gone up. He stooped down; he crouched as a lion and as a lioness; who dares rouse him? The scepter shall not depart from Judah, nor the ruler’s staff from between his feet, until tribute comes to him; and to him shall be the obedience of the peoples. Binding his foal to the vine and his donkey’s colt to the choice vine, he has washed his garments in wine and his vesture in the blood of grapes. His eyes are darker than wine, and his teeth whiter than milk.

For it is evident that our Lord was descended from Judah, and in connection with that tribe Moses said nothing about priests.

And they sang a new song, saying, “Worthy are you to take the scroll and to open its seals, for you were slain, and by your blood you ransomed people for God from every tribe and language and people and nation.

The next day he saw Jesus coming toward him, and said, “Behold, the Lamb of God, who takes away the sin of the world.

And the remnant of Jacob shall be among the nations, in the midst of many peoples, like a lion among the beasts of the forest, like a young lion among the flocks of sheep, which, when it goes through, treads down and tears in pieces, and there is none to deliver.

In that day the root of Jesse, who shall stand as a signal for the peoples—of him shall the nations inquire, and his resting place shall be glorious.

The wolf shall dwell with the lamb, and the leopard shall lie down with the young goat, and the calf and the lion and the fattened calf together; and a little child shall lead them.

Then the voice that I had heard from heaven spoke to me again, saying, “Go, take the scroll that is open in the hand of the angel who is standing on the sea and on the land.

Jesus Christ is the same yesterday and today and forever.

Does a lion roar in the forest, when he has no prey? Does a young lion cry out from his den, if he has taken nothing?

Though Judah became strong among his brothers and a chief came from him, yet the birthright belonged to Joseph).

Then Samson went down with his father and mother to Timnah, and they came to the vineyards of Timnah. And behold, a young lion came toward him roaring.

The revelation of Jesus Christ, which God gave him to show to his servants the things that must soon take place. He made it known by sending his angel to his servant John.

Behold, like a lion coming up from the jungle of the Jordan against a perennial pasture, I will suddenly make him run away from her. And I will appoint over her whomever I choose. For who is like me? Who will summon me? What shepherd can stand before me?

20 Bible Verses About Importance of Prayers