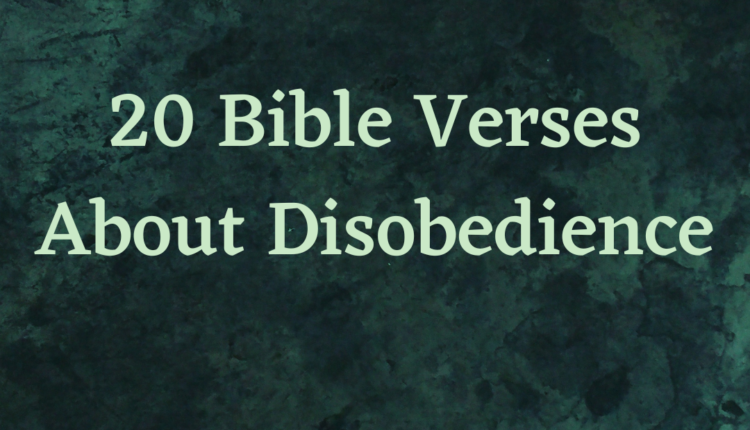 Today we will be dealing with 20 bible verses about disobedience.

Keeping the commandments of God is paramount. God is always happy when we keep and obey his words . He is happy with obedient children. We remember that the bible told us that God loves us and He is always glad and happy with us when we stand by His words and obey Him when in public and also when no one is around. Disobeying God means you’re defying His words and questioning the power He has over our lives as our Father. Let’s endeavour to make Him happy always.

In the book of acts of apostles, imagine what would have happened when God told the disciples to stay in a room and in one accord and wait for the descending of the HolySpirit,what if the disciples had gone against Jesus’ instructions, they would have missed their encounter with the HolySpirit. When we are being led by the HolySpirit to pray ,our duty as Christians is to do what is expected of us and act accordingly to the instructions given to us for by a man’s strength he is nothing.

There is punishment for those who disobey God’s instructions but also know that there’s a reward for those who act accordingly to God’s will and leave by His plans for our life. 20 bible verses have been collected to help us understand more about obeying God and the benefits.

But understand this, that in the last days there will come times of difficulty. For people will be lovers of self, lovers of money, proud, arrogant, abusive, disobedient to their parents, ungrateful, unholy, heartless, unappeasable, slanderous, without self-control, brutal, not loving good, treacherous, reckless, swollen with conceit, lovers of pleasure rather than lovers of God, having the appearance of godliness, but denying its power. Avoid such people.

If a man has a stubborn and rebellious son who will not obey the voice of his father or the voice of his mother, and, though they discipline him, will not listen to them, then his father and his mother shall take hold of him and bring him out to the elders of his city at the gate of the place where he lives, and they shall say to the elders of his city, ‘This our son is stubborn and rebellious; he will not obey our voice; he is a glutton and a drunkard.’ Then all the men of the city shall stone him to death with stones. So you shall purge the evil from your midst, and all Israel shall hear, and fear.

Now the word of the Lord came to Jonah the son of Amittai, saying, “Arise, go to Nineveh, that great city, and call out against it, for their evil has come up before me.” But Jonah rose to flee to Tarshish from the presence of the Lord. He went down to Joppa and found a ship going to Tarshish. So he paid the fare and went on board, to go with them to Tarshish, away from the presence of the Lord. But the Lord hurled a great wind upon the sea, and there was a mighty tempest on the sea, so that the ship threatened to break up. Then the mariners were afraid, and each cried out to his god. And they hurled the cargo that was in the ship into the sea to lighten it for them. But Jonah had gone down into the inner part of the ship and had lain down and was fast asleep.

And he said to them, “You have a fine way of rejecting the commandment of God in order to establish your tradition! For Moses said, ‘Honor your father and your mother’; and, ‘Whoever reviles father or mother must surely die.

Nevertheless, they were disobedient and rebelled against you and cast your law behind their back and killed your prophets, who had warned them in order to turn them back to you, and they committed great blasphemies.

For we ourselves were once foolish, disobedient, led astray, slaves to various passions and pleasures, passing our days in malice and envy, hated by others and hating one another.

Understanding this, that the law is not laid down for the just but for the lawless and disobedient, for the ungodly and sinners, for the unholy and profane, for those who strike their fathers and mothers, for murderers.

Among whom we all once lived in the passions of our flesh, carrying out the desires of the body and the mind, and were by nature children of wrath, like the rest of mankind.

But each person is tempted when he is lured and enticed by his own desire. Then desire when it has conceived gives birth to sin, and sin when it is fully grown brings forth death.

You are of your father the devil, and your will is to do your father’s desires. He was a murderer from the beginning, and has nothing to do with the truth, because there is no truth in him. When he lies, he speaks out of his own character, for he is a liar and the father of lies.

The rod and reproof give wisdom, but a child left to himself brings shame to his mother.

For if God did not spare angels when they sinned, but cast them into hell and committed them to chains of gloomy darkness to be kept until the judgment.

For the people of Israel walked forty years in the wilderness, until all the nation, the men of war who came out of Egypt, perished, because they did not obey the voice of the Lord; the Lord swore to them that he would not let them see the land that the Lord had sworn to their fathers to give to us, a land flowing with milk and honey.

But if you will not listen to me and will not do all these commandments.

For since the message declared by angels proved to be reliable, and every transgression or disobedience received a just retribution.

So whoever knows the right thing to do and fails to do it, for him it is sin.