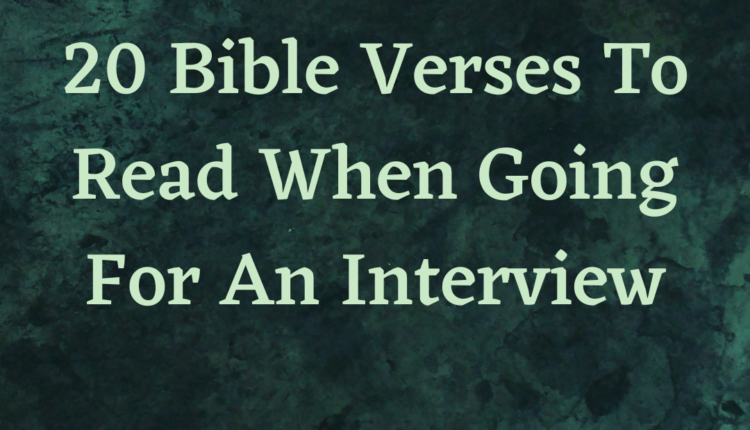 20 Bible Verses To Read When Going For An Interview

Today we will be dealing with 20 bible verses to read when going for an interview.

After trying to get a job, after trying to get a contract , then we’re finally called upon to come for an interview. We get excited and thank God because we know our prayer has been answered by Him. Before going for the interview the spirit of fear and doubt might want to set in. Questions like will I get the job?, Will i be given the contract? Starts to set in. We start getting nervous and scared . But the word of God has come to us this day that we shouldn’t get scared as the Lord is by our side.

It’s the Lord’s doing and it’s marvelous in our sight. When feeling of uncertainty sets in before going for the bible let’s read the bible verses that have been gathered in today’s topic, it will calm us down and give us the grace to go boldly for the interview without fear or feeling anxious. Once we hand over our affairs to God, He will take the wheel and give us a good starts.

There’s no need to be scared of going for that interview since we have gotten the go ahead from God and anyone God has their back no one can harm them. Trust the Lord and the interview you’re going for will be a success. Once we prepare for the interview, we read the word of God and seal it with a prayer, God will definitely go with us. We can study the bible verses below.

And when they bring you before the synagogues and the rulers and the authorities, do not be anxious about how you should defend yourself or what you should say, for the Holy Spirit will teach you in that very hour what you ought to say.

On the third day Esther put on her royal robes and stood in the inner court of the king’s palace, in front of the king’s quarters, while the king was sitting on his royal throne inside the throne room opposite the entrance to the palace. And when the king saw Queen Esther standing in the court, she won favor in his sight, and he held out to Esther the golden scepter that was in his hand. Then Esther approached and touched the tip of the scepter.

He who dwells in the shelter of the Most High will abide in the shadow of the Almighty. I will say to the Lord, “My refuge and my fortress, my God, in whom I trust.” For he will deliver you from the snare of the fowler and from the deadly pestilence. He will cover you with his pinions, and under his wings you will find refuge; his faithfulness is a shield and buckler. You will not fear the terror of the night, nor the arrow that flies by day.

When the turn came for Esther the daughter of Abihail the uncle of Mordecai, who had taken her as his own daughter, to go in to the king, she asked for nothing except what Hegai the king’s eunuch, who had charge of the women, advised. Now Esther was winning favor in the eyes of all who saw her.

When man began to multiply on the face of the land and daughters were born to them, the sons of God saw that the daughters of man were attractive. And they took as their wives any they chose. Then the Lord said, “My Spirit shall not abide in man forever, for he is flesh: his days shall be 120 years.” The Nephilim were on the earth in those days, and also afterward, when the sons of God came in to the daughters of man and they bore children to them. These were the mighty men who were of old, the men of renown. The Lord saw that the wickedness of man was great in the earth, and that every intention of the thoughts of his heart was only evil continually.

James, a servant of God and of the Lord Jesus Christ, To the twelve tribes in the Dispersion: Greetings. Count it all joy, my brothers, when you meet trials of various kinds, for you know that the testing of your faith produces steadfastness. And let steadfastness have its full effect, that you may be perfect and complete, lacking in nothing. If any of you lacks wisdom, let him ask God, who gives generously to all without reproach, and it will be given him.

Whatever your hand finds to do, do it with your might, for there is no work or thought or knowledge or wisdom in Sheol, to which you are going.

Then you will prosper if you are careful to observe the statutes and the rules that the Lord commanded Moses for Israel. Be strong and courageous. Fear not; do not be dismayed.

This Book of the Law shall not depart from your mouth, but you shall meditate on it day and night, so that you may be careful to do according to all that is written in it. For then you will make your way prosperous, and then you will have good success.

And the Lord had given the people favor in the sight of the Egyptians, so that they let them have what they asked. Thus they plundered the Egyptians.

Then he touched their eyes, saying, “According to your faith be it done to you.

Commit your work to the Lord, and your plans will be established.

Man goes out to his work and to his labor until the evening.

What then shall we say to these things? If God is for us, who can be against us?