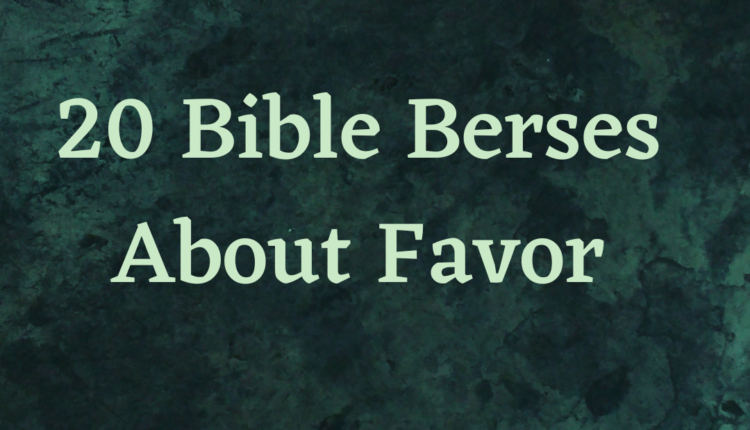 Today we will be dealing with 20 bible verses about favor.

Favour means getting unmerited blessings in various aspects of our lives. Being favored is a great blessing to us. Everything we do will prosper, anywhere we go we are blessed and outstanding. That’s how Jesus blessings and favour are to us. When we are favoured, the devil can’t even have dominion over us, we Excel in all we do. Who God has favoured no one can curse. Examples of people that were favoured in the bible are Hannah, Esther, Mary mother of Jesus, and so on.

There are countless people that have been favored by God . Even our King David was highly favoured by God. If God’s favour is upon us we are blessed beyond doubt at our home, amongst our pairs,at our work place, every areas we find ourselves. As Christians God promised us that as long as we do His will, He will favour us . We saw that King David was highly favoured by God and he was able to win against Goliath without much stress.

Joseph was favoured by God to that everywhere he went to he received blessings and favour and was later made to rule in another man’s land . To be favored has great benefits. We pray that in everything we lay our hands on God’s favour will take over our lives and give us happiness and peace. Twenty bible verses about favor have been collected and listed below.

My son, do not forget my teaching, but let your heart keep my commandments, for length of days and years of life and peace they will add to you. Let not steadfast love and faithfulness forsake you; bind them around your neck; write them on the tablet of your heart. So you will find favor and good success in the sight of God and man.

When the turn came for Esther the daughter of Abihail the uncle of Mordecai, who had taken her as his own daughter, to go in to the king, she asked for nothing except what Hegai the king’s eunuch, who had charge of the women, advised. Now Esther was winning favor in the eyes of all who saw her. And when Esther was taken to King Ahasuerus, into his royal palace, in the tenth month, which is the month of Tebeth, in the seventh year of his reign, the king loved Esther more than all the women, and she won grace and favor in his sight more than all the virgins, so that he set the royal crown on her head and made her queen instead of Vashti. Then the king gave a great feast for all his officials and servants; it was Esther’s feast. He also granted a remission of taxes to the provinces and gave gifts with royal generosity.

And when the king saw Queen Esther standing in the court, she won favor in his sight, and he held out to Esther the golden scepter that was in his hand. Then Esther approached and touched the tip of the scepter.

Moses said to the Lord, “See, you say to me, ‘Bring up this people,’ but you have not let me know whom you will send with me. Yet you have said, ‘I know you by name, and you have also found favor in my sight.

Then she said, “I have found favor in your eyes, my lord, for you have comforted me and spoken kindly to your servant, though I am not one of your servants.

His master saw that the Lord was with him and that the Lord caused all that he did to succeed in his hands. So Joseph found favor in his sight and attended him, and he made him overseer of his house and put him in charge of all that he had.

So Joseph found favor in his sight and attended him, and he made him overseer of his house and put him in charge of all that he had.

Let not steadfast love and faithfulness forsake you; bind them around your neck; write them on the tablet of your heart. So you will find favor and good success in the sight of God and man.

The Lord‘s curse is on the house of the wicked, but he blesses the dwelling of the righteous. Toward the scorners he is scornful, but to the humble he gives favor. The wise will inherit honor, but fools get disgrace.

And God gave Daniel favor and compassion in the sight of the chief of the eunuchs.

And the Lord said to Moses, “This very thing that you have spoken I will do, for you have found favor in my sight, and I know you by name.

And I will give this people favor in the sight of the Egyptians; and when you go, you shall not go empty.

And the angel said to her, “Do not be afraid, Mary, for you have found favor with God.

So you will find favor and good success in the sight of God and man.

For whoever finds me finds life and obtains favor from the Lord.

Now the young man Samuel continued to grow both in stature and in favor with the Lord and also with man.

In the light of a king’s face there is life, and his favor is like the clouds that bring the spring rain.