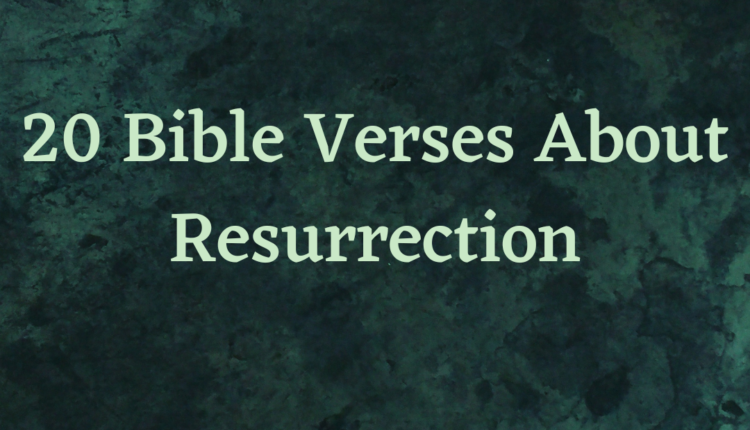 Today we will be dealing with 20 bible verses about resurrection.

Jesus death and suffered was already prophesied through the prophets even before Jesus Christ was born.

Jesus suffered so much because of our sins . He was beaten, spat on, hated, cursed ,stone and so many more because of our sins. After Jesus died, He resurrected after three days. Which signifies that He died for our sin and gave us access directly to God and also conquered death.

After His resurrection, we saw that He left us with the Holy spirit whom will guide and guard us, comfort us and teach us so many things. Resurrection has showed that the devil stronghold over our lives is powerless and has no meaning.

These days people celebrate Easter to remember the resurrection of Jesus Christ. When it was announced that Jesus has risen. The people that killed Him thought they’ve won and ended Jesus, but Jesus proved then wrong.

Christians have hope for eternal life due to the power of resurrection and salvation Jesus gave to us. Jesus paid the debt for our sins, which enables us to enjoy peace and joy through Jesus Christ. We gathered some few scriptures that talked about the resurrection of Christ Jesus below which will give us more understanding and importance of resurrection.

Jesus said to her, “I am the resurrection and the life. Whoever believes in me, though he die, yet shall he live.

Blessed be the God and Father of our Lord Jesus Christ! According to his great mercy, he has caused us to be born again to a living hope through the resurrection of Jesus Christ from the dead.

But on the first day of the week, at early dawn, they went to the tomb, taking the spices they had prepared. And they found the stone rolled away from the tomb, but when they went in they did not find the body of the Lord Jesus. While they were perplexed about this, behold, two men stood by them in dazzling apparel. And as they were frightened and bowed their faces to the ground, the men said to them, “Why do you seek the living among the dead?

Now if we have died with Christ, we believe that we will also live with him. We know that Christ, being raised from the dead, will never die again; death no longer has dominion over him. For the death he died he died to sin, once for all, but the life he lives he lives to God. So you also must consider yourselves dead to sin and alive to God in Christ Jesus.

When the Sabbath was past, Mary Magdalene and Mary the mother of James and Salome bought spices, so that they might go and anoint him. And very early on the first day of the week, when the sun had risen, they went to the tomb. And they were saying to one another, “Who will roll away the stone for us from the entrance of the tomb?” And looking up, they saw that the stone had been rolled back—it was very large. And entering the tomb, they saw a young man sitting on the right side, dressed in a white robe, and they were alarmed.

So the Jews said to him, “What sign do you show us for doing these things?” Jesus answered them, “Destroy this temple, and in three days I will raise it up.” The Jews then said, “It has taken forty-six years to build this temple, and will you raise it up in three days?” But he was speaking about the temple of his body. When therefore he was raised from the dead, his disciples remembered that he had said this, and they believed the Scripture and the word that Jesus had spoken.

That I may know him and the power of his resurrection, and may share his sufferings, becoming like him in his death, that by any means possible I may attain the resurrection from the dead. Not that I have already obtained this or am already perfect, but I press on to make it my own, because Christ Jesus has made me his own.

For the love of Christ controls us, because we have concluded this: that one has died for all, therefore all have died; and he died for all, that those who live might no longer live for themselves but for him who for their sake died and was raised.

When I saw him, I fell at his feet as though dead. But he laid his right hand on me, saying, “Fear not, I am the first and the last, and the living one. I died, and behold I am alive forevermore, and I have the keys of Death and Hades.

For as by a man came death, by a man has come also the resurrection of the dead.

We know that Christ, being raised from the dead, will never die again; death no longer has dominion over him.

Because he has fixed a day on which he will judge the world in righteousness by a man whom he has appointed; and of this he has given assurance to all by raising him from the dead.

Then he appeared to more than five hundred brothers at one time, most of whom are still alive, though some have fallen asleep.

As for me, I shall behold your face in righteousness; when I awake, I shall be satisfied with your likeness.

Beginning from the baptism of John until the day when he was taken up from us—one of these men must become with us a witness to his resurrection.

He is not here, for he has risen, as he said. Come, see the place where he lay.

Then the other disciple, who had reached the tomb first, also went in, and he saw and believed; for as yet they did not understand the Scripture, that he must rise from the dead.