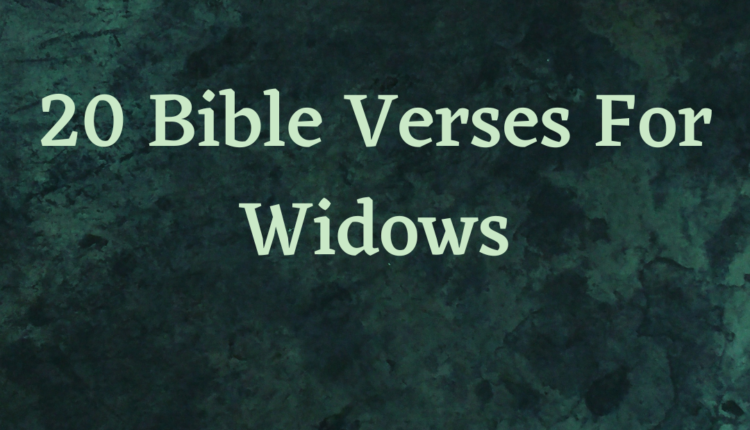 Today we will be dealing with 20 bible verses for widows.

God loves the widows . He has always taken care of them. In the old testament we see that He made provisions for them, protected them and also warned everyone around them not to take advantage of them .

We also saw that in the new testament, provisions were made for them too. People of integrity were appointed by the apostle to take care of and guide them. God’s messages to widows in today’s topic is to let them know that He loves and care for them and also want them to know that they’re not in this world alone.

It is also important to know that He has been described as the defender of the widows . The word defense here means an advocate. God takes special care in looking out for the widows. We can count on God because He will always support the widows and be there for them. If you’re a widow or a single mom, trust God today that He has made every resources needed available for you and you will never lack because your biggest supporter (God) is very rich.

We enjoin you to meditate on God’s word. Our hope and prayer is that the scripture will speak to you and inspire you like nothing else on earth can do.

You shall not mistreat any widow or fatherless child. If you do mistreat them, and they cry out to me, I will surely hear their cry, and my wrath will burn, and I will kill you with the sword, and your wives shall become widows and your children fatherless.

Honor widows who are truly widows. But if a widow has children or grandchildren, let them first learn to show godliness to their own household and to make some return to their parents, for this is pleasing in the sight of God. She who is truly a widow, left all alone, has set her hope on God and continues in supplications and prayers night and day, but she who is self-indulgent is dead even while she lives.

If any believing woman has relatives who are widows, let her care for them. Let the church not be burdened, so that it may care for those who are truly widows.

Soon afterward he went to a town called Nain, and his disciples and a great crowd went with him. As he drew near to the gate of the town, behold, a man who had died was being carried out, the only son of his mother, and she was a widow, and a considerable crowd from the town was with her. And when the Lord saw her, he had compassion on her and said to her, “Do not weep.” Then he came up and touched the bier, and the bearers stood still. And he said, “Young man, I say to you, arise.” And the dead man sat up and began to speak, and Jesus gave him to his mother.

The Lord watches over the sojourners; he upholds the widow and the fatherless, but the way of the wicked he brings to ruin.

And he sat down opposite the treasury and watched the people putting money into the offering box. Many rich people put in large sums. And a poor widow came and put in two small copper coins, which make a penny. And he called his disciples to him and said to them, “Truly, I say to you, this poor widow has put in more than all those who are contributing to the offering box. For they all contributed out of their abundance, but she out of her poverty has put in everything she had, all she had to live on.

Who devour widows’ houses and for a pretense make long prayers. They will receive the greater condemnation.

If you do not oppress the sojourner, the fatherless, or the widow, or shed innocent blood in this place, and if you do not go after other gods to your own harm.

Your princes are rebels and companions of thieves. Everyone loves a bribe and runs after gifts. They do not bring justice to the fatherless, and the widow’s cause does not come to them.

Let a widow be enrolled if she is not less than sixty years of age, having been the wife of one husband, and having a reputation for good works: if she has brought up children, has shown hospitality, has washed the feet of the saints, has cared for the afflicted, and has devoted herself to every good work. But refuse to enroll younger widows, for when their passions draw them away from Christ, they desire to marry and so incur condemnation for having abandoned their former faith.

To the unmarried and the widows I say that it is good for them to remain single as I am.

But if a priest’s daughter is widowed or divorced and has no child and returns to her father’s house, as in her youth, she may eat of her father’s food; yet no lay person shall eat of it.

They wrong the barren, childless woman, and do no good to the widow.

They kill the widow and the sojourner, and murder the fatherless.

Who devour widows’ houses and for a pretense make long prayers. They will receive the greater condemnation.

And then as a widow until she was eighty-four. She did not depart from the temple, worshiping with fasting and prayer night and day.

To turn aside the needy from justice and to rob the poor of my people of their right, that widows may be their spoil, and that they may make the fatherless their prey.

20 Comforting Verses To Read When Mourning