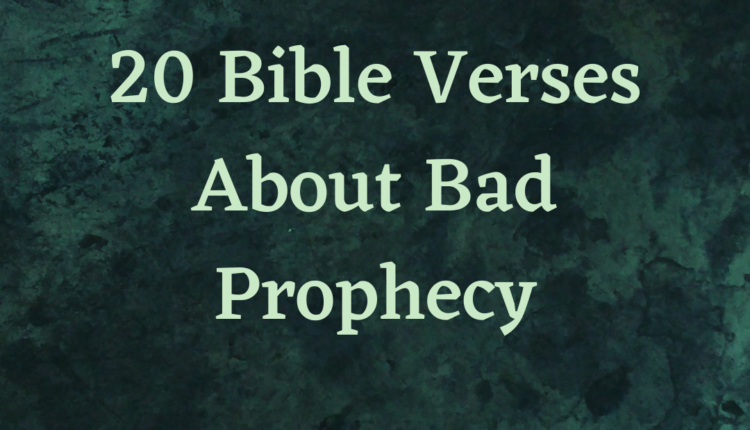 Today we will be dealing with 20 bible verses about bad prophecy.

Hearing bad prophecy concerning your life from people especially those we know to be God’s prophet and ministers can be scary and unpleasing to the ear. It gives us that unsettling feeling and can also make us scared because of how bad the prophecy is.

The good news in today’s topic is that no evil shall come near our dwelling and every one who curses us shall be cursed instead of us. So whenever we hear of bad prophecy what we should do is to reject and rebuke it in the name of God and not to dwell in it to much as we have God by our side who will not even allow evil to come near our dwelling and won’t allow us to be mocked by our enemies too.

Twenty bible verses have been collected to help us to know what to do when we are given bad prophecy and how we can come against it in the name of our Lord Jesus Christ name.

Beware of false prophets, who come to you in sheep’s clothing but inwardly are ravenous wolves. You will recognize them by their fruits. Are grapes gathered from thornbushes, or figs from thistles? So, every healthy tree bears good fruit, but the diseased tree bears bad fruit. A healthy tree cannot bear bad fruit, nor can a diseased tree bear good fruit. Every tree that does not bear good fruit is cut down and thrown into the fire.

Beloved, do not believe every spirit, but test the spirits to see whether they are from God, for many false prophets have gone out into the world. By this you know the Spirit of God: every spirit that confesses that Jesus Christ has come in the flesh is from God, and every spirit that does not confess Jesus is not from God. This is the spirit of the antichrist, which you heard was coming and now is in the world already. Little children, you are from God and have overcome them, for he who is in you is greater than he who is in the world. They are from the world; therefore they speak from the world, and the world listens to them.

But false prophets also arose among the people, just as there will be false teachers among you, who will secretly bring in destructive heresies, even denying the Master who bought them, bringing upon themselves swift destruction. And many will follow their sensuality, and because of them the way of truth will be blasphemed. And in their greed they will exploit you with false words. Their condemnation from long ago is not idle, and their destruction is not asleep.

For such men are false apostles, deceitful workmen, disguising themselves as apostles of Christ. And no wonder, for even Satan disguises himself as an angel of light. So it is no surprise if his servants, also, disguise themselves as servants of righteousness. Their end will correspond to their deeds.

Thus says the Lord of hosts: “Do not listen to the words of the prophets who prophesy to you, filling you with vain hopes. They speak visions of their own minds, not from the mouth of the Lord.

And the beast was captured, and with it the false prophet who in its presence had done the signs by which he deceived those who had received the mark of the beast and those who worshiped its image. These two were thrown alive into the lake of fire that burns with sulfur.

And the Lord said to me: “The prophets are prophesying lies in my name. I did not send them, nor did I command them or speak to them. They are prophesying to you a lying vision, worthless divination, and the deceit of their own minds.

An appalling and horrible thing has happened in the land: the prophets prophesy falsely, and the priests rule at their direction; my people love to have it so, but what will you do when the end comes?

And her prophets have smeared whitewash for them, seeing false visions and divining lies for them, saying, ‘Thus says the Lord God,’ when the Lord has not spoken.

My hand will be against the prophets who see false visions and who give lying divinations. They shall not be in the council of my people, nor be enrolled in the register of the house of Israel, nor shall they enter the land of Israel. And you shall know that I am the Lord God.

If a prophet or a dreamer of dreams arises among you and gives you a sign or a wonder, and the sign or wonder that he tells you comes to pass, and if he says, ‘Let us go after other gods,’ which you have not known, ‘and let us serve them,’ you shall not listen to the words of that prophet or that dreamer of dreams. For the Lord your God is testing you, to know whether you love the Lord your God with all your heart and with all your soul.

Its heads give judgment for a bribe; its priests teach for a price; its prophets practice divination for money; yet they lean on the Lord and say, “Is not the Lord in the midst of us? No disaster shall come upon us.

Thus says the Lord concerning the prophets who lead my people astray, who cry “Peace” when they have something to eat, but declare war against him who puts nothing into their mouths.

In the prophets of Samaria I saw an unsavory thing: they prophesied by Baal and led my people Israel astray.

For false christs and false prophets will arise and perform great signs and wonders, so as to lead astray, if possible, even the elect.

But the prophet who presumes to speak a word in my name that I have not commanded him to speak, or who speaks in the name of other gods, that same prophet shall die.

Woe to you, when all people speak well of you, for so their fathers did to the false prophets.

For false christs and false prophets will arise and perform signs and wonders, to lead astray, if possible, the elect.