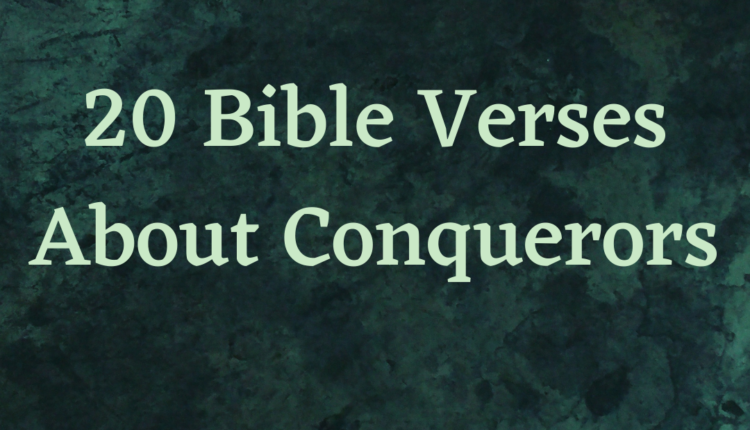 Today we will be dealing with 20 bible verses about conquerors.

As Christians when we hold unto our faith regardless of how challenging it is , there’s a reward for us. That’s why the bible called us conquerors. We are called conquerors because we have won many battles both seen and unseen to us.

The bible says we wrestle not against blood and flesh but against principalities in high places , against powers, against rulers of darkness, that’s why as Christians we are advised to hold unto our faith and love God dearly. The bible also said we are more than conquerors through Christ that has loved us because we will always overcome and be victorious over every schemes of the devil. The devil has got nothing on us as long as we have God.

The day we accepted God as our Lord and savior,He gave us the power to overcome and retrieve everything the devil has taken from us that’s why it is said that the devil cannot win against the children of God and Jesus Christ is our hope of glory and restoration. The good news in today’s topic is that we should hold unto God firmly as only those who love Him will be called conquerors. Twenty bible verses have been collected to help us understand more about the word conquerors.

No, in all these things we are more than conquerors through him who loved us. For I am sure that neither death nor life, nor angels nor rulers, nor things present nor things to come, nor powers, nor height nor depth, nor anything else in all creation, will be able to separate us from the love of God in Christ Jesus our Lord.

So put away all malice and all deceit and hypocrisy and envy and all slander. Like newborn infants, long for the pure spiritual milk, that by it you may grow up into salvation— if indeed you have tasted that the Lord is good. As you come to him, a living stone rejected by men but in the sight of God chosen and precious, you yourselves like living stones are being built up as a spiritual house, to be a holy priesthood, to offer spiritual sacrifices acceptable to God through Jesus Christ.

But he was wounded for our transgressions; he was crushed for our iniquities; upon him was the chastisement that brought us peace, and with his stripes we are healed.

And the king of Assyria brought people from Babylon, Cuthah, Avva, Hamath, and Sepharvaim, and placed them in the cities of Samaria instead of the people of Israel. And they took possession of Samaria and lived in its cities.

In the first year of Belshazzar king of Babylon, Daniel saw a dream and visions of his head as he lay in his bed. Then he wrote down the dream and told the sum of the matter. Daniel declared, “I saw in my vision by night, and behold, the four winds of heaven were stirring up the great sea. And four great beasts came up out of the sea, different from one another. The first was like a lion and had eagles’ wings. Then as I looked its wings were plucked off, and it was lifted up from the ground and made to stand on two feet like a man, and the mind of a man was given to it. And behold, another beast, a second one, like a bear. It was raised up on one side. It had three ribs in its mouth between its teeth; and it was told, ‘Arise, devour much flesh.

And in the days of those kings the God of heaven will set up a kingdom that shall never be destroyed, nor shall the kingdom be left to another people. It shall break in pieces all these kingdoms and bring them to an end, and it shall stand forever.

He himself bore our sins in his body on the tree, that we might die to sin and live to righteousness. By his wounds you have been healed.

Now I would remind you, brothers, of the gospel I preached to you, which you received, in which you stand, and by which you are being saved, if you hold fast to the word I preached to you—unless you believed in vain. For I delivered to you as of first importance what I also received: that Christ died for our sins in accordance with the Scriptures, that he was buried, that he was raised on the third day in accordance with the Scriptures.

And I, when I came to you, brothers, did not come proclaiming to you the testimony of God with lofty speech or wisdom. For I decided to know nothing among you except Jesus Christ and him crucified. And I was with you in weakness and in fear and much trembling, and my speech and my message were not in plausible words of wisdom, but in demonstration of the Spirit and of power, that your faith might not rest in the wisdom of men but in the power of God.

Whom God put forward as a propitiation by his blood, to be received by faith. This was to show God’s righteousness, because in his divine forbearance he had passed over former sins.

How God anointed Jesus of Nazareth with the Holy Spirit and with power. He went about doing good and healing all who were oppressed by the devil, for God was with him.

And Babylon, the glory of kingdoms, the splendor and pomp of the Chaldeans, will be like Sodom and Gomorrah when God overthrew them.

So Joshua struck the whole land, the hill country and the Negeb and the lowland and the slopes, and all their kings. He left none remaining, but devoted to destruction all that breathed, just as the Lord God of Israel commanded.

Since then we have a great high priest who has passed through the heavens, Jesus, the Son of God, let us hold fast our confession.

Christ redeemed us from the curse of the law by becoming a curse for us—for it is written, “Cursed is everyone who is hanged on a tree.