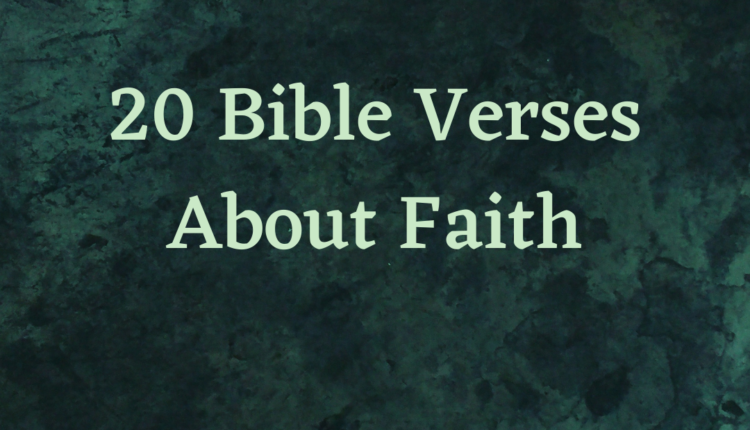 Today we will be dealing with 20 bible verses about Faith

In our christian journey having faith is paramount. Faith gives us strength and give us the ability to wait upon the Lord. A Christian who doesn’t have faith may fall back or even back slide.

What do we understand by faith?
A Christian faith means having complete trust or Confidence in God. It also means strong belief in God. The bible defined faith as “Now faith is the substance of things hoped for, the evidence of things not seen.” Which means once we pray it has already been settled with God. God who listens to us will definitely answer our prayer.

In today’s topic we want us to know that as Christians it’s expedient we know know to wait on the Lord when we pray as the popular saying goes that God is not a magician, He will answer us when it is our time and when He sees that we are ready for our blessings. We shouldn’t doubt God as Christians because our faith is what we need to keep us going.

Today’s topic is to make us build a strong faith in the name of Jesus Christ, a name that is above every other name. We see that there are some verses in the bible that talked about people that have waited on God and were not put to shame. We remember the story of out father Abraham, Queen Esther, Prophet Joshua, Hannah the mother of Samuel to mention a few. They’ve all shown that those who put their faith in God will not do so in vain and definitely be rewarded.

And Jesus answered them, “Have faith in God. Truly, I say to you, whoever says to this mountain, ‘Be taken up and thrown into the sea,’ and does not doubt in his heart, but believes that what he says will come to pass, it will be done for him. Therefore I tell you, whatever you ask in prayer, believe that you have received it, and it will be yours.

Now faith is the assurance of things hoped for, the conviction of things not seen. For by it the people of old received their commendation. By faith we understand that the universe was created by the word of God, so that what is seen was not made out of things that are visible. By faith Abel offered to God a more acceptable sacrifice than Cain, through which he was commended as righteous, God commending him by accepting his gifts. And through his faith, though he died, he still speaks. By faith Enoch was taken up so that he should not see death, and he was not found, because God had taken him. Now before he was taken he was commended as having pleased God.

He said to them, “Because of your little faith. For truly, I say to you, if you have faith like a grain of mustard seed, you will say to this mountain, ‘Move from here to there,’ and it will move, and nothing will be impossible for you.

What good is it, my brothers, if someone says he has faith but does not have works? Can that faith save him? If a brother or sister is poorly clothed and lacking in daily food, and one of you says to them, “Go in peace, be warmed and filled,” without giving them the things needed for the body, what good is that? So also faith by itself, if it does not have works, is dead. But someone will say, “You have faith and I have works.” Show me your faith apart from your works, and I will show you my faith by my works.

If any of you lacks wisdom, let him ask God, who gives generously to all without reproach, and it will be given him. But let him ask in faith, with no doubting, for the one who doubts is like a wave of the sea that is driven and tossed by the wind. For that person must not suppose that he will receive anything from the Lord; he is a double-minded man, unstable in all his ways.

And Jesus answered them, “Truly, I say to you, if you have faith and do not doubt, you will not only do what has been done to the fig tree, but even if you say to this mountain, ‘Be taken up and thrown into the sea,’ it will happen. And whatever you ask in prayer, you will receive, if you have faith.

Now faith is the assurance of things hoped for, the conviction of things not seen. For by it the people of old received their commendation. By faith we understand that the universe was created by the word of God, so that what is seen was not made out of things that are visible. By faith Abel offered to God a more acceptable sacrifice than Cain, through which he was commended as righteous, God commending him by accepting his gifts. And through his faith, though he died, he still speaks. By faith Enoch was taken up so that he should not see death, and he was not found, because God had taken him. Now before he was taken he was commended as having pleased God.

By faith Noah, being warned by God concerning events as yet unseen, in reverent fear constructed an ark for the saving of his household. By this he condemned the world and became an heir of the righteousness that comes by faith.

And if I have prophetic powers, and understand all mysteries and all knowledge, and if I have all faith, so as to remove mountains, but have not love, I am nothing.

Jesus said to her, “I am the resurrection and the life. Whoever believes in me, though he die, yet shall he live, and everyone who lives and believes in me shall never die. Do you believe this?

That according to the riches of his glory he may grant you to be strengthened with power through his Spirit in your inner being, so that Christ may dwell in your hearts through faith—that you, being rooted and grounded in love.

Though you have not seen him, you love him. Though you do not now see him, you believe in him and rejoice with joy that is inexpressible and filled with glory, obtaining the outcome of your faith, the salvation of your souls.

So that the tested genuineness of your faith—more precious than gold that perishes though it is tested by fire—may be found to result in praise and glory and honor at the revelation of Jesus Christ.

For I am not ashamed of the gospel, for it is the power of God for salvation to everyone who believes, to the Jew first and also to the Greek. For in it the righteousness of God is revealed from faith for faith, as it is written, “The righteous shall live by faith.

So we are always of good courage. We know that while we are at home in the body we are away from the Lord, for we walk by faith, not by sight.

“No one can serve two masters, for either he will hate the one and love the other, or he will be devoted to the one and despise the other. You cannot serve God and money.

Remembering before our God and Father your work of faith and labor of love and steadfastness of hope in our Lord Jesus Christ.

For in Christ Jesus neither circumcision nor uncircumcision counts for anything, but only faith working through love.

20 Bible Verses To Pray For Children as God’s…

20 Bible Verses To Pray to Break The Yoke of Barrenness