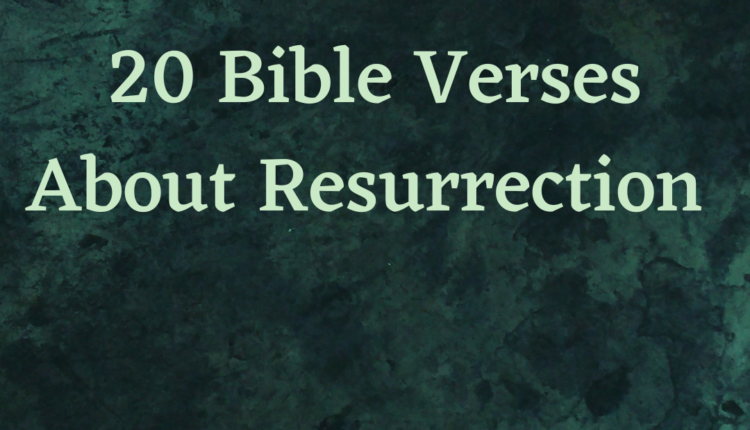 Today we will be dealing with 20 bible verses about Resurrection.

God loves us His children so much that He gave His son Jesus Christ to us to pay for our sins. Jesus came to the world to die for us and to make salvation available for everybody. It was said that when Jesus died the veil in the temple was torn into two which signifies that everyone has been given access to come to the throne of grace to ask for favour and mercy and most importantly to seek God’s face.

Resurrection means to restore back to life. When Jesus died He rose again from the dead. One of the significant importance of resurrection is that Jesus defeated death and rendered it powerless for His children which has given us free access to eternal life. That’s why our bible verses have been motivating us to come back to Jesus and accept Him. Twenty Bible verses have been collected in today’s topic that gives more insight about the significance of Jesus resurrection.

Blessed be the God and Father of our Lord Jesus Christ! According to his great mercy, he has caused us to be born again to a living hope through the resurrection of Jesus Christ from the dead.

When the Sabbath was past, Mary Magdalene and Mary the mother of James and Salome bought spices, so that they might go and anoint him. And very early on the first day of the week, when the sun had risen, they went to the tomb. And they were saying to one another, “Who will roll away the stone for us from the entrance of the tomb?” And looking up, they saw that the stone had been rolled back—it was very large. And entering the tomb, they saw a young man sitting on the right side, dressed in a white robe, and they were alarmed.

See, we are going up to Jerusalem. And the Son of Man will be delivered over to the chief priests and scribes, and they will condemn him to death and deliver him over to the Gentiles to be mocked and flogged and crucified, and he will be raised on the third day.

That I may know him and the power of his resurrection, and may share his sufferings, becoming like him in his death, that by any means possible I may attain the resurrection from the dead. Not that I have already obtained this or am already perfect, but I press on to make it my own, because Christ Jesus has made me his own.

For as by a man came death, by a man has come also the resurrection of the dead.

When I saw him, I fell at his feet as though dead. But he laid his right hand on me, saying, “Fear not, I am the first and the last, and the living one. I died, and behold I am alive forevermore, and I have the keys of Death and Hades.

We know that Christ, being raised from the dead, will never die again; death no longer has dominion over him.

And Jesus cried out again with a loud voice and yielded up his spirit. And behold, the curtain of the temple was torn in two, from top to bottom. And the earth shook, and the rocks were split. The tombs also were opened. And many bodies of the saints who had fallen asleep were raised, and coming out of the tombs after his resurrection they went into the holy city and appeared to many.

Because he has fixed a day on which he will judge the world in righteousness by a man whom he has appointed; and of this he has given assurance to all by raising him from the dead.

And said to them, “Thus it is written, that the Christ should suffer and on the third day rise from the dead, and that repentance and forgiveness of sins should be proclaimed in his name to all nations, beginning from Jerusalem.

Women received back their dead by resurrection. Some were tortured, refusing to accept release, so that they might rise again to a better life.

For to this end Christ died and lived again, that he might be Lord both of the dead and of the living.

Beginning from the baptism of John until the day when he was taken up from us—one of these men must become with us a witness to his resurrection.

For as by a man came death, by a man has come also the resurrection of the dead. For as in Adam all die, so also in Christ shall all be made alive.

Blessed and holy is the one who shares in the first resurrection! Over such the second death has no power, but they will be priests of God and of Christ, and they will reign with him for a thousand years.

For since we believe that Jesus died and rose again, even so, through Jesus, God will bring with him those who have fallen asleep.

20 Bible Verses About Trials and Tribulations