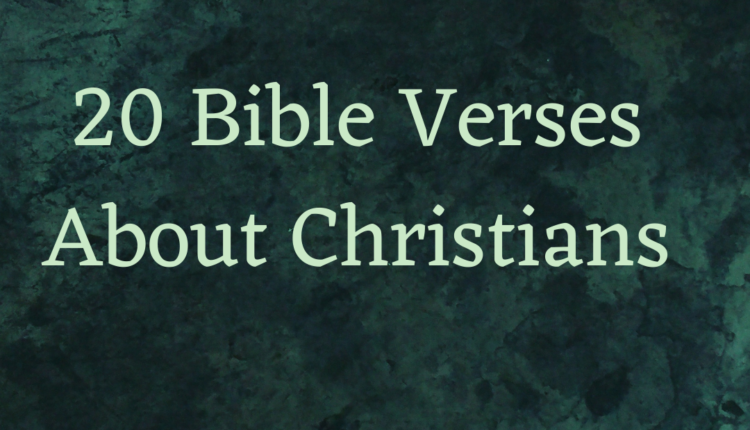 Today we will be dealing with 20 bible verses about christians

Christians are believers of Jesus Christ and someone who holds unto their believe tightly. Christians were first called Christians in Antioch when they saw their attributes and noticed their behaviors. It was said that they noticed they were acting like Jesus meaning they were acting Christ-like which earned them the name christians.

Basically from this preaching we must have heard during one of our bible studies, we see that as christians we are expected to act like Jesus just as the bible says be holy just as your heavenly Father is holy. Christians should show qualities that will attract unbelievers to denounce their old ways and accept Jesus as their Lord and savior.

The first goal of a Christian is to preach the good news which is the word of God and most importantly win souls for God. As Christians we should love God with our hearts and also extends God’s salvation to other people around us. Let’s read the twenty bible verses below that can help us understand more on how to be a Christian and also confidently preach the word of God.

For you formed my inward parts; you knitted me together in my mother’s womb. I praise you, for I am fearfully and wonderfully made. Wonderful are your works; my soul knows it very well. My frame was not hidden from you, when I was being made in secret, intricately woven in the depths of the earth. Your eyes saw my unformed substance; in your book were written, every one of them, the days that were formed for me, when as yet there was none of them.

Beloved, we are God’s children now, and what we will be has not yet appeared; but we know that when he appears we shall be like him, because we shall see him as he is.

And these signs will accompany those who believe: in my name they will cast out demons; they will speak in new tongues; they will pick up serpents with their hands; and if they drink any deadly poison, it will not hurt them; they will lay their hands on the sick, and they will recover.

Therefore, if anyone is in Christ, he is a new creation. The old has passed away; behold, the new has come.

If anyone sees his brother committing a sin not leading to death, he shall ask, and God will give him life—to those who commit sins that do not lead to death. There is sin that leads to death; I do not say that one should pray for that.

I have been crucified with Christ. It is no longer I who live, but Christ who lives in me. And the life I now live in the flesh I live by faith in the Son of God, who loved me and gave himself for me.

And the Lord’s servant must not be quarrelsome but kind to everyone, able to teach, patiently enduring evil, correcting his opponents with gentleness. God may perhaps grant them repentance leading to a knowledge of the truth, and they may come to their senses and escape from the snare of the devil, after being captured by him to do his will.

Trust in the Lord with all your heart, and do not lean on your own understanding. In all your ways acknowledge him, and he will make straight your paths.

Everyone who goes on ahead and does not abide in the teaching of Christ, does not have God. Whoever abides in the teaching has both the Father and the Son. If anyone comes to you and does not bring this teaching, do not receive him into your house or give him any greeting, for whoever greets him takes part in his wicked works.

The man answered, “Why, this is an amazing thing! You do not know where he comes from, and yet he opened my eyes. We know that God does not listen to sinners, but if anyone is a worshiper of God and does his will, God listens to him. Never since the world began has it been heard that anyone opened the eyes of a man born blind. If this man were not from God, he could do nothing.

Truly, truly, I say to you, whoever hears my word and believes him who sent me has eternal life. He does not come into judgment, but has passed from death to life.

Whoever believes and is baptized will be saved, but whoever does not believe will be condemned.

And the Word became flesh and dwelt among us, and we have seen his glory, glory as of the only Son from the Father, full of grace and truth.

The Lord is not slow to fulfill his promise as some count slowness, but is patient toward you, not wishing that any should perish, but that all should reach repentance.

Finally, all of you, have unity of mind, sympathy, brotherly love, a tender heart, and a humble mind.

For in Christ Jesus you are all sons of God, through faith.

And you will be hated by all for my name’s sake. But the one who endures to the end will be saved.

20 Bible Verses About Word of God

20 Bible Verses To Pray For God’s Will and Purpose