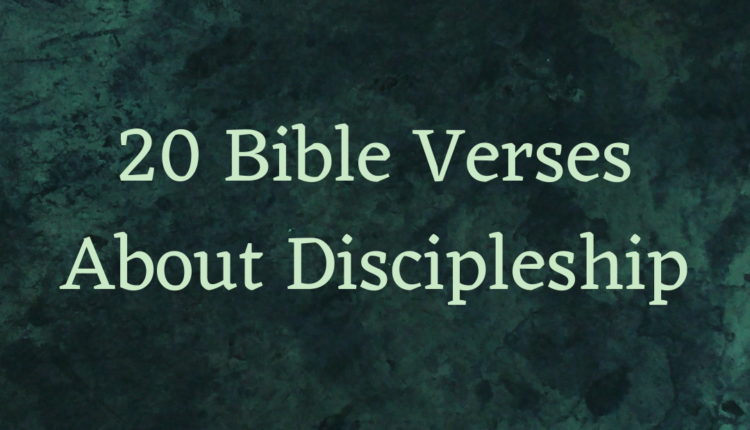 Today we will be dealing with 20 bible verses about Discipleship. We are called to serve the Lord. The bible says seek first the kingdom of God and every other things shall be added to us. God wants us to seek Him first then He will reward us greatly even beyond our imagination.

Discipleship is the state of being a disciple or a follower. Being a disciple means that you’re a personal follower of Jesus and an obedient child of God. The disciples of Jesus followed Him everywhere and listened to all He had to say to them. They asked questions to fulfill their curiosity about how they can serve the Lord and how they can help win souls for Christ.

We saw that the disciples showed good examples of how our relationship with Christ should be and how we should work for him and spread the good news which is preaching to the unbelievers and winning souls for Christ. Our topic today is to enjoin us to emulate these characters as disciples. Twenty bible verses have been collected for us to understand how we can be a true disciple of Jesus.

And he gave the apostles, the prophets, the evangelists, the shepherds and teachers, to equip the saints for the work of ministry, for building up the body of Christ, until we all attain to the unity of the faith and of the knowledge of the Son of God, to mature manhood, to the measure of the stature of the fullness of Christ, so that we may no longer be children, tossed to and fro by the waves and carried about by every wind of doctrine, by human cunning, by craftiness in deceitful schemes. Rather, speaking the truth in love, we are to grow up in every way into him who is the head, into Christ.

And what you have heard from me in the presence of many witnesses entrust to faithful men who will be able to teach others also.

So Jesus said to the Jews who had believed in him, “If you abide in my word, you are truly my disciples, and you will know the truth, and the truth will set you free.

Then Jesus told his disciples, “If anyone would come after me, let him deny himself and take up his cross and follow me. For whoever would save his life will lose it, but whoever loses his life for my sake will find it.

But as for you, teach what accords with sound doctrine. Older men are to be sober-minded, dignified, self-controlled, sound in faith, in love, and in steadfastness. Older women likewise are to be reverent in behavior, not slanderers or slaves to much wine. They are to teach what is good, and so train the young women to love their husbands and children, to be self-controlled, pure, working at home, kind, and submissive to their own husbands, that the word of God may not be reviled.

By this my Father is glorified, that you bear much fruit and so prove to be my disciples.

As they were going along the road, someone said to him, “I will follow you wherever you go.” And Jesus said to him, “Foxes have holes, and birds of the air have nests, but the Son of Man has nowhere to lay his head.” To another he said, “Follow me.” But he said, “Lord, let me first go and bury my father.” And Jesus said to him, “Leave the dead to bury their own dead. But as for you, go and proclaim the kingdom of God.” Yet another said, “I will follow you, Lord, but let me first say farewell to those at my home.

Passing alongside the Sea of Galilee, he saw Simon and Andrew the brother of Simon casting a net into the sea, for they were fishermen. And Jesus said to them, “Follow me, and I will make you become fishers of men.” And immediately they left their nets and followed him. And going on a little farther, he saw James the son of Zebedee and John his brother, who were in their boat mending the nets. And immediately he called them, and they left their father Zebedee in the boat with the hired servants and followed him.

And calling the crowd to him with his disciples, he said to them, “If anyone would come after me, let him deny himself and take up his cross and follow me.

But when the disciples gathered about him, he rose up and entered the city, and on the next day he went on with Barnabas to Derbe. When they had preached the gospel to that city and had made many disciples, they returned to Lystra and to Iconium and to Antioch, strengthening the souls of the disciples, encouraging them to continue in the faith, and saying that through many tribulations we must enter the kingdom of God.

As Jesus passed on from there, he saw a man called Matthew sitting at the tax booth, and he said to him, “Follow me.” And he rose and followed him.

So Jesus said to the Jews who had believed in him, “If you abide in my word, you are truly my disciples.

Then Jesus told his disciples, “If anyone would come after me, let him deny himself and take up his cross and follow me.

Now there was in Joppa a disciple named Tabitha, which, translated, means Dorcas. She was full of good works and acts of charity.

And he said to them, “Follow me, and I will make you fishers of men.” Immediately they left their nets and followed him.

A disciple is not above his teacher, but everyone when he is fully trained will be like his teacher.

By this all people will know that you are my disciples, if you have love for one another.