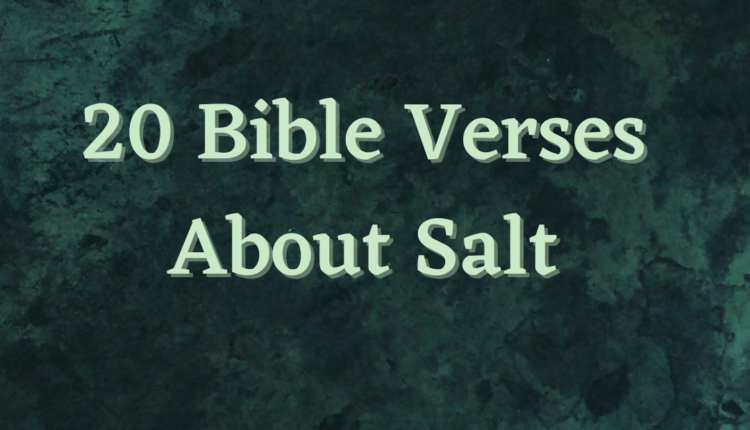 Today we will be dealing with 20 bible verses about Salt

Salt was greatly talked about in the bible . We human beings are called the salt of the earth. Salt is a white substance that is used as seasoning or for preserving food. Salt is known to give food it’s taste. A food cooked without salt will be tasteless and will have no value. That’s why Jesus called us salt of the earth. We add values to the world created by God, and our existence alone have great importance.
We are called God’s ministers that is we are here to preach the good news to the world and win souls for Christ. We are referred to as salt of the earth to remind us that we are to add value to every one around us and also have great impact on people we meet. When we say make impact , means that we are to create a positive effect on both unbelievers and believers that will help them to understand the love of God and how we can continue to enjoy Gods love as Christians. Twenty bible verses have been collected to help us understand the importance of Christians as salt of the earth.

You are the salt of the earth, but if salt has lost its taste, how shall its saltiness be restored? It is no longer good for anything except to be thrown out and trampled under people’s feet. You are the light of the world. A city set on a hill cannot be hidden.

Salt is good, but if the salt has lost its saltiness, how will you make it salty again? Have salt in yourselves, and be at peace with one another.

You are the salt of the earth, but if salt has lost its taste, how shall its saltiness be restored? It is no longer good for anything except to be thrown out and trampled under people’s feet. “You are the light of the world. A city set on a hill cannot be hidden. Nor do people light a lamp and put it under a basket, but on a stand, and it gives light to all in the house. In the same way, let your light shine before others, so that they may see your good works and give glory to your Father who is in heaven.

Then the men of the city said to Elisha, “Behold now, the situation of this city is pleasant, as my lord sees; but the water is bad and the land is unfruitful. He said, “Bring me a new bowl, and put salt in it.” So they brought it to him. Then he went to the spring of water and threw salt in it and said, “Thus says the Lord, I have healed this water; from now on neither death nor miscarriage shall come from it.” So the water has been healed to this day, according to the word that Elisha spoke.

Let your speech always be gracious, seasoned with salt, so that you may know how you ought to answer each person.

Salt is good, but if salt has lost its taste, how shall its saltiness be restored? It is of no use either for the soil or for the manure pile. It is thrown away. He who has ears to hear, let him hear.

All the holy contributions that the people of Israel present to the Lord I give to you, and to your sons and daughters with you, as a perpetual due. It is a covenant of salt forever before the Lord for you and for your offspring with you.

And whatever is needed—bulls, rams, or sheep for burnt offerings to the God of heaven, wheat, salt, wine, or oil, as the priests at Jerusalem require—let that be given to them day by day without fail.

Therefore, as I live,” declares the Lord of hosts, the God of Israel, “Moab shall become like Sodom, and the Ammonites like Gomorrah, a land possessed by nettles and salt pits, and a waste forever. The remnant of my people shall plunder them, and the survivors of my nation shall possess them.

The waters coming down from above stood and rose up in a heap very far away, at Adam, the city that is beside Zarethan, and those flowing down toward the Sea of the Arabah, the Salt Sea, were completely cut off. And the people passed over opposite Jericho.

The whole land burned out with brimstone and salt, nothing sown and nothing growing, where no plant can sprout, an overthrow like that of Sodom and Gomorrah, Admah, and Zeboiim, which the Lord overthrew in his anger and wrath.Then men will say, ‘Because they forsook the covenant of the Lord, the God of their fathers, which He made with them when He brought them out of the land of Egypt.

And as for your birth, on the day you were born your cord was not cut, nor were you washed with water to cleanse you, nor rubbed with salt, nor wrapped in swaddling cloths.

He struck down ten thousand Edomites in the Valley of Salt and took Sela by storm, and called it Joktheel, which is its name to this day.

And the Arabah to the Sea of Chinneroth eastward, and in the direction of Beth-jeshimoth, to the Sea of the Arabah, the Salt Sea, southward to the foot of the slopes of Pisgah.

And David made a name for himself when he returned from striking down 18,000 Edomites in the Valley of Salt.

But Lot’s wife, behind him, looked back, and she became a pillar of salt.

You shall present them before the Lord, and the priests shall sprinkle salt on them and offer them up as a burnt offering to the Lord.

And their south boundary ran from the end of the Salt Sea, from the bay that faces southward.