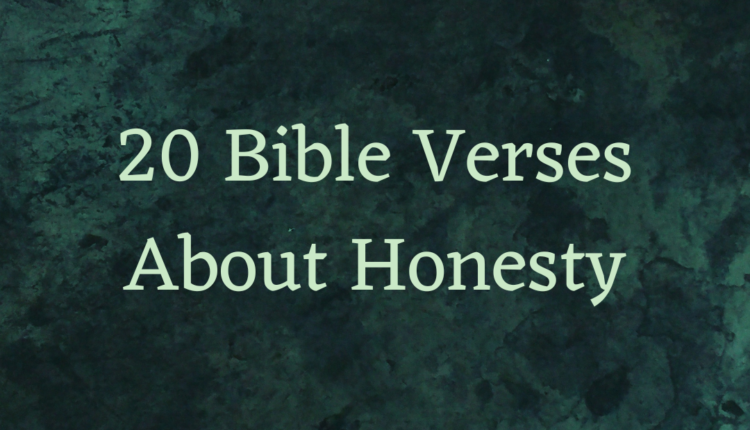 Today we will be dealing with 20 bible verses about Honesty.

Honesty is the best legacy we can pass down to our fellow brethren in Christ as a Christian. Honesty is the quality of being honest. When you’re honest, you’re free of deceit, untruthfulness and insincerity. Being honest is a good quality that a good christian must have and hold onto. Being honest makes it easy for people around you as they tend to trust you and believe whatever you say. A dishonest man is not loved by people around him, definitely know one will listen to him preach about the word of God since he is known not to be a doer of the gospel he’s preaching.

Todays topic is about how important and advantageous it is for christians to be honest and sincere in every of their endeavors. When we lie we’re disobeying God’s words which is not what God wants for us. So let’s try to be honest always. Twenty bible verses have been collected together that can help us get more understanding about the word honesty.

There are six things that the Lord hates, seven that are an abomination to him: haughty eyes, a lying tongue, and hands that shed innocent blood, a heart that devises wicked plans, feet that make haste to run to evil, a false witness who breathes out lies, and one who sows discord among brothers. My son, keep your father’s commandment, and forsake not your mother’s teaching.

For “Whoever desires to love life and see good days, let him keep his tongue from evil and his lips from speaking deceit; let him turn away from evil and do good; let him seek peace and pursue it. For the eyes of the Lord are on the righteous, and his ears are open to their prayer. But the face of the Lord is against those who do evil.

But we have renounced disgraceful, underhanded ways. We refuse to practice cunning or to tamper with God’s word, but by the open statement of the truth we would commend ourselves to everyone’s conscience in the sight of God.

So my honesty will answer for me later, when you come to look into my wages with you. Every one that is not speckled and spotted among the goats and black among the lambs, if found with me, shall be counted stolen.

Do not lie to one another, seeing that you have put off the old self with its practices and have put on the new self, which is being renewed in knowledge after the image of its creator.

Show yourself in all respects to be a model of good works, and in your teaching show integrity, dignity, and sound speech that cannot be condemned, so that an opponent may be put to shame, having nothing evil to say about us.

And as for you, if you will walk before me, as David your father walked, with integrity of heart and uprightness, doing according to all that I have commanded you, and keeping my statutes and my rules, then I will establish your royal throne over Israel forever, as I promised David your father, saying, ‘You shall not lack a man on the throne of Israel.

A good name is to be chosen rather than great riches, and favor is better than silver or gold. The rich and the poor meet together; the Lord is the maker of them all. The prudent sees danger and hides himself, but the simple go on and suffer for it. The reward for humility and fear of the Lord is riches and honor and life. Thorns and snares are in the way of the crooked; whoever guards his soul will keep far from them.

Moreover, look for able men from all the people, men who fear God, who are trustworthy and hate a bribe, and place such men over the people as chiefs of thousands, of hundreds, of fifties, and of tens.

He who walks righteously and speaks uprightly, who despises the gain of oppressions, who shakes his hands, lest they hold a bribe, who stops his ears from hearing of bloodshed and shuts his eyes from looking on evil.

You shall not pervert justice. You shall not show partiality, and you shall not accept a bribe, for a bribe blinds the eyes of the wise and subverts the cause of the righteous. Justice, and only justice, you shall follow, that you may live and inherit the land that the Lord your God is giving you.

These are the things that you shall do: Speak the truth to one another; render in your gates judgments that are true and make for peace; do not devise evil in your hearts against one another, and love no false oath, for all these things I hate, declares the Lord.

So you will walk in the way of the good and keep to the paths of the righteous. For the upright will inhabit the land, and those with integrity will remain in it.

Pay to all what is owed to them: taxes to whom taxes are owed, revenue to whom revenue is owed, respect to whom respect is owed, honor to whom honor is owed.

Lying lips are an abomination to the Lord, but those who act faithfully are his delight.

Better is a poor person who walks in his integrity than one who is crooked in speech and is a fool.

And you will know the truth, and the truth will set you free.

Righteous lips are the delight of a king, and he loves him who speaks what is right.