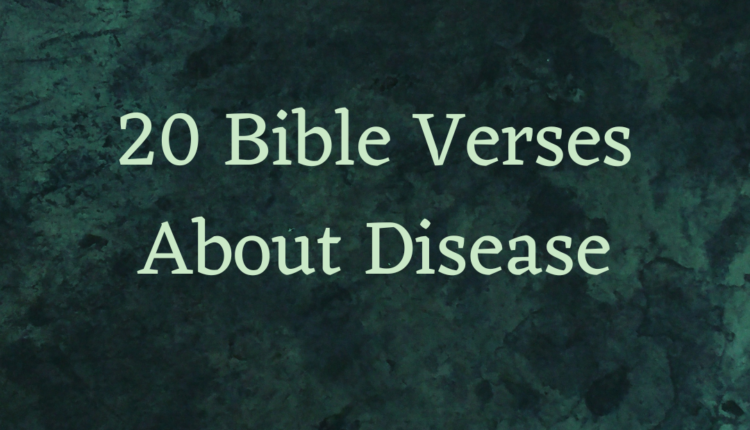 Today we will be dealing with 20 bible verses about Disease.

Jesus healed so many diseases while He was here on earth. He healed those who had leprosy, He healed the blind ,sick,those with tormenting spirit,the woman with the issue of blood got her healing just by touching the hem of Jesus clothe. We see that so many people got their healing and were free from their diseases.

The good news we bring to us in today’s topic is to tell us that no matter how long we have been suffering from a particular disease, God is willing and able to heal us and deliver us from whatever it is. Jesus Christ can turn our doctor’s report to a good news for us. Let’s trust Jesus because even the word of God in the bible says by the stripes of Jesus we are healed and made whole. Twenty bible verses have been collected to help us pray with to fight and overcome the disease that has been denying us of our good health.

Saying, “If you will diligently listen to the voice of the Lord your God, and do that which is right in his eyes, and give ear to his commandments and keep all his statutes, I will put none of the diseases on you that I put on the Egyptians, for I am the Lord, your healer.

Bless the Lord, O my soul, and forget not all his benefits, who forgives all your iniquity, who heals all your diseases, who redeems your life from the pit, who crowns you with steadfast love and mercy.

And a letter came to him from Elijah the prophet, saying, “Thus says the Lord, the God of David your father, ‘Because you have not walked in the ways of Jehoshaphat your father, or in the ways of Asa king of Judah, but have walked in the way of the kings of Israel and have enticed Judah and the inhabitants of Jerusalem into whoredom, as the house of Ahab led Israel into whoredom, and also you have killed your brothers, of your father’s house, who were better than yourself, behold, the Lord will bring a great plague on your people, your children, your wives, and all your possessions, and you yourself will have a severe sickness with a disease of your bowels, until your bowels come out because of the disease, day by day.’” And the Lord stirred up against Jehoram the anger of the Philistines and of the Arabians who are near the Ethiopians.

So to keep me from becoming conceited because of the surpassing greatness of the revelations, a thorn was given me in the flesh, a messenger of Satan to harass me, to keep me from becoming conceited. Three times I pleaded with the Lord about this, that it should leave me. But he said to me, “My grace is sufficient for you, for my power is made perfect in weakness.” Therefore I will boast all the more gladly of my weaknesses, so that the power of Christ may rest upon me. For the sake of Christ, then, I am content with weaknesses, insults, hardships, persecutions, and calamities. For when I am weak, then I am strong.

And he called to him his twelve disciples and gave them authority over unclean spirits, to cast them out, and to heal every disease and every affliction.

In the thirty-ninth year of his reign Asa was diseased in his feet, and his disease became severe. Yet even in his disease he did not seek the Lord, but sought help from physicians.

Then I will do this to you: I will visit you with panic, with wasting disease and fever that consume the eyes and make the heart ache. And you shall sow your seed in vain, for your enemies shall eat it.

Is anyone among you sick? Let him call for the elders of the church, and let them pray over him, anointing him with oil in the name of the Lord. And the prayer of faith will save the one who is sick, and the Lord will raise him up. And if he has committed sins, he will be forgiven.

In those days Hezekiah became sick and was at the point of death. And Isaiah the prophet the son of Amoz came to him, and said to him, “Thus says the Lord: Set your house in order, for you shall die, you shall not recover.” Then Hezekiah turned his face to the wall and prayed to the Lord, and said, “Please, O Lord, remember how I have walked before you in faithfulness and with a whole heart, and have done what is good in your sight.” And Hezekiah wept bitterly. Then the word of the Lord came to Isaiah: “Go and say to Hezekiah, Thus says the Lord, the God of David your father: I have heard your prayer; I have seen your tears. Behold, I will add fifteen years to your life.

The Lord will strike you with wasting disease and with fever, inflammation and fiery heat, and with drought and with blight and with mildew. They shall pursue you until you perish.

So that even handkerchiefs or aprons that had touched his skin were carried away to the sick, and their diseases left them and the evil spirits came out of them.

So his fame spread throughout all Syria, and they brought him all the sick, those afflicted with various diseases and pains, those oppressed by demons, epileptics, and paralytics, and he healed them.

This was to fulfill what was spoken by the prophet Isaiah: “He took our illnesses and bore our diseases.

For he had healed many, so that all who had diseases pressed around him to touch him.

And when this had taken place, the rest of the people on the island who had diseases also came and were cured.

And he will bring upon you again all the diseases of Egypt, of which you were afraid, and they shall cling to you.

Therefore the leprosy of Naaman shall cling to you and to your descendants forever.” So he went out from his presence a leper, like snow.

Who forgives all your iniquity, who heals all your diseases.

And he called the twelve together and gave them power and authority over all demons and to cure diseases.

And he went throughout all Galilee, teaching in their synagogues and proclaiming the gospel of the kingdom and healing every disease and every affliction among the people.