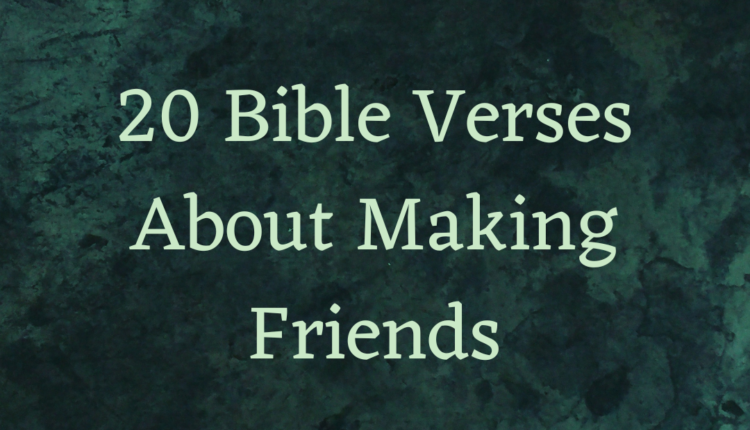 Today we will be dealing with 20 bible verses about making Friends.

As children of God the first thing we should always remember is that when we accepted Christ as our Lord and savior , we denounced our old ways and promised never to go back to sinning. While growing our faith we have to do everything that will help us grow with Christ both spiritually and mentally. When making friends, we need friends that will help with our christian growth, our journey with Christ. Also we need friends that will help us grow with the holy spirit and direct our paths in alignment with Jesus standards.

Making friends is good but we should know that we need friends that will help us to see the things of God as our priority. We should always remember that there are blessings for those who walk not in the counsel of the ungodly and there’s also a punishments for those who allow their friends to lead them astray. Twenty bible verses about making Friends have been collected together in today’s topic. Let’s read them for more understanding.

A man of many companions may come to ruin, but there is a friend who sticks closer than a brother.

Make no friendship with a man given to anger, nor go with a wrathful man, lest you learn his ways and entangle yourself in a snare.

Do not forsake your friend and your father’s friend, and do not go to your brother’s house in the day of your calamity. Better is a neighbor who is near than a brother who is far away.

This is my commandment, that you love one another as I have loved you. Greater love has no one than this, that someone lay down his life for his friends. You are my friends if you do what I command you. No longer do I call you servants, for the servant does not know what his master is doing; but I have called you friends, for all that I have heard from my Father I have made known to you.

For it is not an enemy who taunts me— then I could bear it; it is not an adversary who deals insolently with me— then I could hide from him. But it is you, a man, my equal, my companion, my familiar friend. We used to take sweet counsel together; within God’s house we walked in the throng.

And the Scripture was fulfilled that says, “Abraham believed God, and it was counted to him as righteousness”—and he was called a friend of God.

Many seek the favor of a generous man, and everyone is a friend to a man who gives gifts. All a poor man’s brothers hate him; how much more do his friends go far from him! He pursues them with words, but does not have them.

Greater love has no one than this, that someone lay down his life for his friends. You are my friends if you do what I command you. No longer do I call you servants, for the servant does not know what his master is doing; but I have called you friends, for all that I have heard from my Father I have made known to you.

This is my commandment, that you love one another as I have loved you. Greater love has no one than this, that someone lay down his life for his friends. You are my friends if you do what I command you.

Thus the Lord used to speak to Moses face to face, as a man speaks to his friend. When Moses turned again into the camp, his assistant Joshua the son of Nun, a young man, would not depart from the tent.

My friends scorn me; my eye pours out tears to God, that he would argue the case of a man with God, as a son of man does with his neighbor.

Now when Job’s three friends heard of all this evil that had come upon him, they came each from his own place, Eliphaz the Temanite, Bildad the Shuhite, and Zophar the Naamathite. They made an appointment together to come to show him sympathy and comfort him. And when they saw him from a distance, they did not recognize him. And they raised their voices and wept, and they tore their robes and sprinkled dust on their heads toward heaven. And they sat with him on the ground seven days and seven nights, and no one spoke a word to him, for they saw that his suffering was very great.

Two are better than one, because they have a good reward for their toil. For if they fall, one will lift up his fellow. But woe to him who is alone when he falls and has not another to lift him up! Again, if two lie together, they keep warm, but how can one keep warm alone? And though a man might prevail against one who is alone, two will withstand him—a threefold cord is not quickly broken.

Draw near to God, and he will draw near to you. Cleanse your hands, you sinners, and purify your hearts, you double-minded.

For if while we were enemies we were reconciled to God by the death of his Son, much more, now that we are reconciled, shall we be saved by his life.

He who loves purity of heart, and whose speech is gracious, will have the king as his friend.

Bear one another’s burdens, and so fulfill the law of Christ.

Beloved, let us love one another, for love is from God, and whoever loves has been born of God and knows God.

Bearing with one another and, if one has a complaint against another, forgiving each other; as the Lord has forgiven you, so you also must forgive.

20 Bible Verses About Helping Those in Need