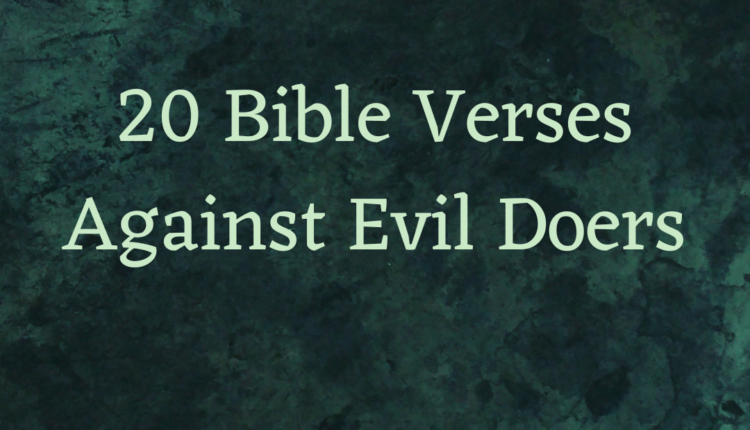 Today we will be dealing with 20 bible verses against evil doers.

The heart of man is wicked. As Christians we must have heard from our bible study teachers that despite how Jesus was a pure soul He still had many enemies that plotted evil against Him. Some people around us might go against us just because we accepted Jesus and this might cause us to have more enemies wanting to do us evil. We should not be scared because God has promised to be with us at all times and He never sleeps nor slumber.

We don’t even have to offend anyone to have an enemy, some people around us just hate us and will go to any length to do us evil. As Christians we know God has promised us that no harm will come to us as He will give His angels charge over us to keep us and protect us. No evil will befall us is what the bible said. So we shouldn’t be afraid of evil doers. In today’s topic we have collected twenty bible verses that we can pray with to help us fight evil doers around us.

There are six things that the Lord hates, seven that are an abomination to him: haughty eyes, a lying tongue, and hands that shed innocent blood, a heart that devises wicked plans, feet that make haste to run to evil, a false witness who breathes out lies, and one who sows discord among brothers.

You are of your father the devil, and your will is to do your father’s desires. He was a murderer from the beginning, and has nothing to do with the truth, because there is no truth in him. When he lies, he speaks out of his own character, for he is a liar and the father of lies.

Do you not see that whatever goes into the mouth passes into the stomach and is expelled? But what comes out of the mouth proceeds from the heart, and this defiles a person. For out of the heart come evil thoughts, murder, adultery, sexual immorality, theft, false witness, slander. These are what defile a person. But to eat with unwashed hands does not defile anyone.

But in the prophets of Jerusalem I have seen a horrible thing: they commit adultery and walk in lies; they strengthen the hands of evildoers, so that no one turns from his evil; all of them have become like Sodom to me, and its inhabitants like Gomorrah.

The vision of Isaiah the son of Amoz, which he saw concerning Judah and Jerusalem in the days of Uzziah, Jotham, Ahaz, and Hezekiah, kings of Judah. Hear, O heavens, and give ear, O earth; for the Lord has spoken: “Children have I reared and brought up, but they have rebelled against me. The ox knows its owner, and the donkey its master’s crib, but Israel does not know, my people do not understand.” Ah, sinful nation, a people laden with iniquity, offspring of evildoers, children who deal corruptly! They have forsaken the Lord, they have despised the Holy One of Israel, they are utterly estranged. Why will you still be struck down? Why will you continue to rebel? The whole head is sick, and the whole heart faint.

I hate the assembly of evildoers, and I will not sit with the wicked.

Behold, God will not reject a blameless man, nor take the hand of evildoers.

But solid food is for the mature, for those who have their powers of discernment trained by constant practice to distinguish good from evil.

Repay no one evil for evil, but give thought to do what is honorable in the sight of all. If possible, so far as it depends on you, live peaceably with all. Beloved, never avenge yourselves, but leave it to the wrath of God, for it is written, “Vengeance is mine, I will repay, says the Lord.” To the contrary, “if your enemy is hungry, feed him; if he is thirsty, give him something to drink; for by so doing you will heap burning coals on his head.” Do not be overcome by evil, but overcome evil with good.

But as for those whose heart goes after their detestable things and their abominations, I will bring their deeds upon their own heads, declares the Lord God.

I know your works, your toil and your patient endurance, and how you cannot bear with those who are evil, but have tested those who call themselves apostles and are not, and found them to be false.

They profess to know God, but they deny him by their works. They are detestable, disobedient, unfit for any good work.

Whoever says “I know him” but does not keep his commandments is a liar, and the truth is not in him.

So whoever knows the right thing to do and fails to do it, for him it is sin.

The sacrifice of the wicked is an abomination; how much more when he brings it with evil intent.

20 Bible Verses on How To Overcome The Devil