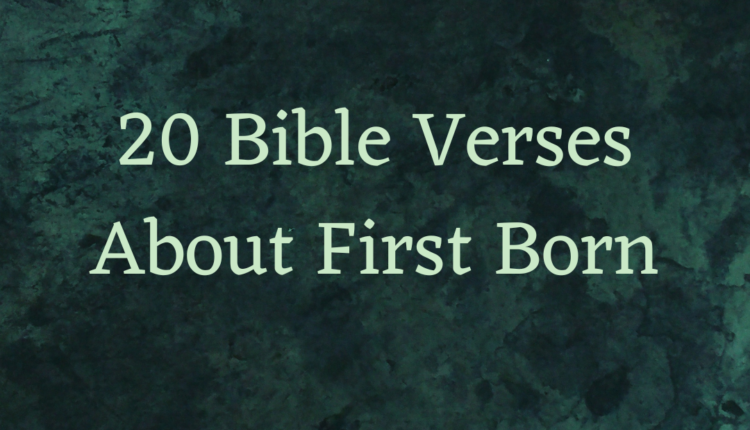 Today we will be dealing with 20 Bible Verses About First Born.

When we first become parents , we felt great joy and gladness in our hearts. It’s our first time of having a child and we need to nurture and build the child so that he can have a solid foundation in Christ Jesus. Hannah dedicated her first son to the Lord and that was the best decision she made . Samuel became a prophet whom God loved so much and gave him the duty of appointing kings for the Israelites. We see here that it is of great benefits that we train our children in the way of the Lord so that they won’t be influenced by corrupt communications and evil peer pressure.

When we have our first kid, we should dedicate them to God and help them grow by listening to the words of God so that they can pass down the legacy we’ve helped them build to their siblings. Twenty bible verses have been collected in today’s topic to help us read and pray with with our first child.

Consecrate to me all the firstborn. Whatever is the first to open the womb among the people of Israel, both of man and of beast, is mine.

And she gave birth to her firstborn son and wrapped him in swaddling cloths and laid him in a manger, because there was no place for them in the inn.

And from Jesus Christ the faithful witness, the firstborn of the dead, and the ruler of kings on earth. To him who loves us and has freed us from our sins by his blood.

The sons of Reuben the firstborn of Israel (for he was the firstborn, but because he defiled his father’s couch, his birthright was given to the sons of Joseph the son of Israel, so that he could not be enrolled as the oldest son; though Judah became strong among his brothers and a chief came from him, yet the birthright belonged to Joseph).

And I will pour out on the house of David and the inhabitants of Jerusalem a spirit of grace and pleas for mercy, so that, when they look on me, on him whom they have pierced, they shall mourn for him, as one mourns for an only child, and weep bitterly over him, as one weeps over a firstborn.

Will the Lord be pleased with thousands of rams, with ten thousands of rivers of oil? Shall I give my firstborn for my transgression, the fruit of my body for the sin of my soul?

Joseph said to his father, “Not so, my father, for this one is the firstborn. Place your right hand on his head.” But his father refused and said, “I know, my son, I know; he also will become a people and he also will be great. However, his younger brother shall be greater than he, and his descendants shall become a multitude of nations.

You shall eat in the presence of the Lord your God, at the place where He chooses to establish His name, the tithe of your grain, your new wine, your oil, and the firstborn of your herd and your flock, so that you may learn to fear the Lord your God always.

And I pronounced them unclean because of their gifts, in that they caused all their firstborn to pass through the fire so that I might make them desolate, in order that they might know that I am the Lord.

And she gave birth to her firstborn son; and she wrapped Him in cloths, and laid Him in a manger, because there was no room for them in the inn.

For those whom He foreknew, He also predestined to become conformed to the image of His Son, so that He would be the firstborn among many brethren.