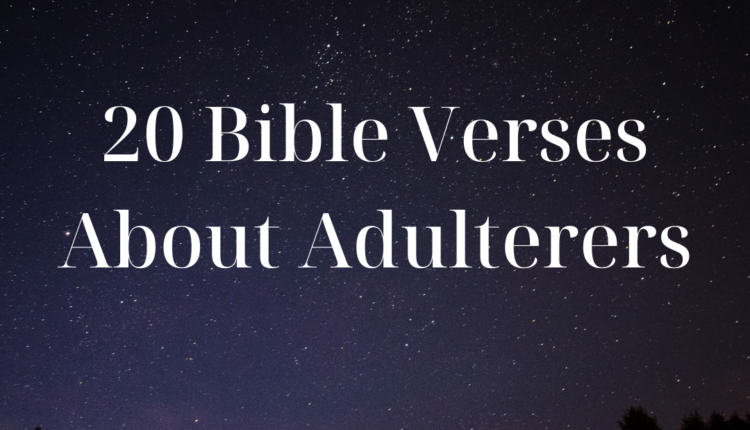 Today we will be dealing with 20 bible verses about Adulterers.

God wants His children to keep His commandments at all times. He told us in His commandments not to commit adultery. Committing adultery is against the rules of God. As christians it is important we follow every rules God gave us religiously. Marriage is an institution that God heads over.

Adultery is a voluntary sexual intercourse between a married person and someone else who is not their spouse. We see that God frowns against this alot, the bible told us to be holy just as our heavenly Father is holy , so in today’s topic we are advising us to obey what God says about not committing adultery and staying faithful to our spouse and our God.

The Marriage foundation should be built on God so that He can take over all the affairs of the home. Twenty bible verses on what God says about Adultery and how God sees adulterers have been collected in today’s topic.

Then they shall bring out the young woman to the door of her father’s house, and the men of her city shall stone her to death with stones, because she has done an outrageous thing in Israel by whoring in her father’s house. So you shall purge the evil from your midst.

And he said, “What comes out of a person is what defiles him. For from within, out of the heart of man, come evil thoughts, sexual immorality, theft, murder, adultery, coveting, wickedness, deceit, sensuality, envy, slander, pride, foolishness. All these evil things come from within, and they defile a person.

And I say to you: whoever divorces his wife, except for sexual immorality, and marries another, commits adultery.

If a man is found lying with the wife of another man, both of them shall die, the man who lay with the woman, and the woman. So you shall purge the evil from Israel.

Therefore God gave them up in the lusts of their hearts to impurity, to the dishonoring of their bodies among themselves, because they exchanged the truth about God for a lie and worshiped and served the creature rather than the Creator, who is blessed forever! Amen. For this reason God gave them up to dishonorable passions. For their women exchanged natural relations for those that are contrary to nature; and the men likewise gave up natural relations with women and were consumed with passion for one another, men committing shameless acts with men and receiving in themselves the due penalty for their error.

But Jesus went to the Mount of Olives. Early in the morning he came again to the temple. All the people came to him, and he sat down and taught them. The scribes and the Pharisees brought a woman who had been caught in adultery, and placing her in the midst they said to him, “Teacher, this woman has been caught in the act of adultery. Now in the Law Moses commanded us to stone such women. So what do you say?

Now we know that the law is good, if one uses it lawfully, understanding this, that the law is not laid down for the just but for the lawless and disobedient, for the ungodly and sinners, for the unholy and profane, for those who strike their fathers and mothers, for murderers, the sexually immoral, men who practice homosexuality, enslavers, liars, perjurers, and whatever else is contrary to sound doctrine.

For this is the will of God, your sanctification: that you abstain from sexual immorality; that each one of you know how to control his own body in holiness and honor, not in the passion of lust like the Gentiles who do not know God; that no one transgress and wrong his brother in this matter, because the Lord is an avenger in all these things, as we told you beforehand and solemnly warned you. For God has not called us for impurity, but in holiness.

Outside are the dogs and sorcerers and the sexually immoral and murderers and idolaters, and everyone who loves and practices falsehood.

For his judgments are true and just; for he has judged the great prostitute who corrupted the earth with her immorality, and has avenged on her the blood of his servants.