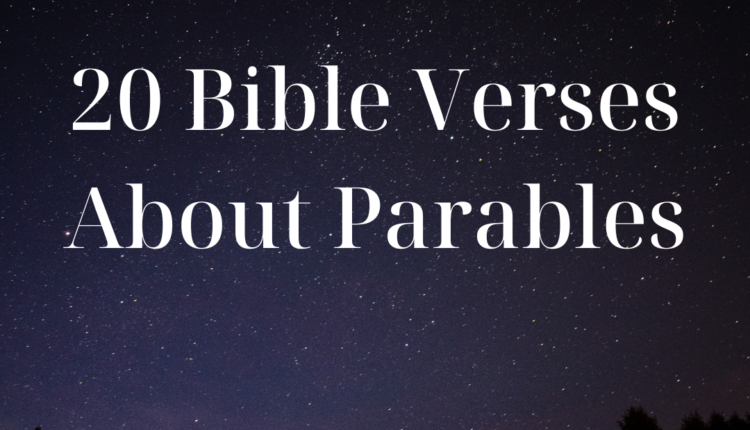 Today we will be dealing with 20 bible verses about Parables.

Jesus Christ is filled with wisdom and understanding. He gave us so many advises when He was on earth. There were time the bible recorded that Jesus taught His followers using Parable. Parable is a simple way of illustrating a moral lesson or spiritual instructions. When Jesus taught so many people that were willing to listen to Him, He taught them using moral and spiritual illustrations such as when He explained how the kingdom of God looks like, how the kingdom of God take so much importance in saving a lost soul.

That’s why we need to seek wisdom as the bible says that if any man lacks wisdom let him ask, we need the understanding of God to be able to break down what God is saying to us. Twenty bible verses of when Jesus taught His followers using Parables have been collected, we pray that as we read through the holy spirit will give us the spirit of understanding and discernment to know what Jesus is saying to us.

This was to fulfill what was spoken by the prophet: “I will open my mouth in parables; I will utter what has been hidden since the foundation of the world.

When one of those who reclined at table with him heard these things, he said to him, “Blessed is everyone who will eat bread in the kingdom of God!” But he said to him, “A man once gave a great banquet and invited many. And at the time for the banquet he sent his servant to say to those who had been invited, ‘Come, for everything is now ready.’ But they all alike began to make excuses. The first said to him, ‘I have bought a field, and I must go out and see it. Please have me excused.’ And another said, ‘I have bought five yoke of oxen, and I go to examine them. Please have me excused.

For it is written that Abraham had two sons, one by a slave woman and one by a free woman. But the son of the slave was born according to the flesh, while the son of the free woman was born through promise. Now this may be interpreted allegorically: these women are two covenants. One is from Mount Sinai, bearing children for slavery; she is Hagar. Now Hagar is Mount Sinai in Arabia; she corresponds to the present Jerusalem, for she is in slavery with her children. But the Jerusalem above is free, and she is our mother.

For if anyone is a hearer of the word and not a doer, he is like a man who looks intently at his natural face in a mirror. For he looks at himself and goes away and at once forgets what he was like. But the one who looks into the perfect law, the law of liberty, and perseveres, being no hearer who forgets but a doer who acts, he will be blessed in his doing.

And he became hungry and wanted something to eat, but while they were preparing it, he fell into a trance and saw the heavens opened and something like a great sheet descending, being let down by its four corners upon the earth. In it were all kinds of animals and reptiles and birds of the air. And there came a voice to him: “Rise, Peter; kill and eat.” But Peter said, “By no means, Lord; for I have never eaten anything that is common or unclean.

You are the light of the world. A city set on a hill cannot be hidden. Nor do people light a lamp and put it under a basket, but on a stand, and it gives light to all in the house. In the same way, let your light shine before others, so that they may see your good works and give glory to your Father who is in heaven.

And Jehoash king of Israel sent word to Amaziah king of Judah, “A thistle on Lebanon sent to a cedar on Lebanon, saying, ‘Give your daughter to my son for a wife,’ and a wild beast of Lebanon passed by and trampled down the thistle.

Then Jesus said to him, “Put your sword back into its place. For all who take the sword will perish by the sword. Do you think that I cannot appeal to my Father, and he will at once send me more than twelve legions of angels? But how then should the Scriptures be fulfilled, that it must be so?

For I know the plans I have for you, declares the Lord, plans for welfare and not for evil, to give you a future and a hope.

I will open my mouth in a parable; I will utter dark sayings from of old.

You have heard that it was said, ‘An eye for an eye and a tooth for a tooth.’ But I say to you, Do not resist the one who is evil. But if anyone slaps you on the right cheek, turn to him the other also.

Therefore, if anyone cleanses himself from what is dishonorable, he will be a vessel for honorable use, set apart as holy, useful to the master of the house, ready for every good work.

And the Lord said, “You pity the plant, for which you did not labor, nor did you make it grow, which came into being in a night and perished in a night.

It is the hard-working farmer who ought to have the first share of the crops.

Then the disciples came and said to him, “Why do you speak to them in parables?” And he answered them, “To you it has been given to know the secrets of the kingdom of heaven, but to them it has not been given.

20 Bible Verses About The Spreading of The Word of God