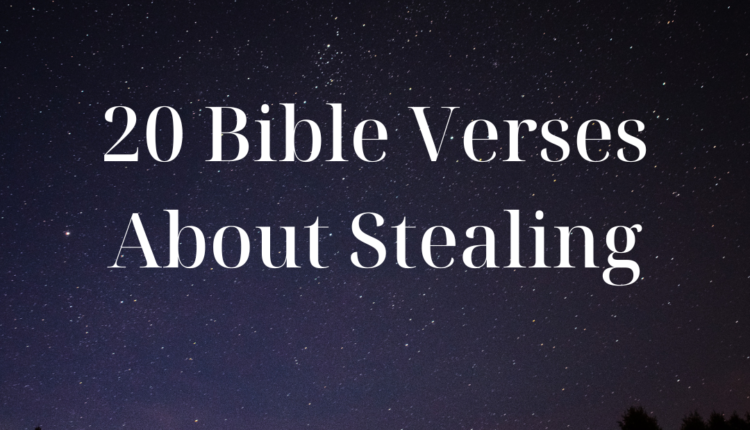 Today we will be dealing with 20 bible verses about stealing.

Stealing is bad. Stealing is taking someone else’s property without their permission or legal rights and without intending to return it. God commanded us not to steal as it is a sin. As children of God when we feel the urge to steal what does not belong to us we should rebuke it with the power of the holy spirit. That is why the holy spirit is around to help us, when we pray lots of things happen and we should know today that no prayer Is to small to pray. Stealing is a sin and it also means taking what does not belong to you.

The bible says avoid evil communications. There’s a saying that bad friends can make a good christian from a Christian home bad too,that’s why it s advisable to flee from every appearance of the devil. Everything that looks evil around us should be stayed away from. Peer pressure is the cause some people from a good christian background do bad things , so in today’s topic we will be praying with twenty bible verses that have been picked from the bible to rebuke every spirit of stealing and evil communications.

The Lord spoke to Moses, saying, “If anyone sins and commits a breach of faith against the Lord by deceiving his neighbor in a matter of deposit or security, or through robbery, or if he has oppressed his neighbor or has found something lost and lied about it, swearing falsely—in any of all the things that people do and sin thereby— if he has sinned and has realized his guilt and will restore what he took by robbery or what he got by oppression or the deposit that was committed to him or the lost thing that he found or anything about which he has sworn falsely, he shall restore it in full and shall add a fifth to it, and give it to him to whom it belongs on the day he realizes his guilt.

Or do you not know that the unrighteous will not inherit the kingdom of God? Do not be deceived: neither the sexually immoral, nor idolaters, nor adulterers, nor men who practice homosexuality, nor thieves, nor the greedy, nor drunkards, nor revilers, nor swindlers will inherit the kingdom of God. And such were some of you. But you were washed, you were sanctified, you were justified in the name of the Lord Jesus Christ and by the Spirit of our God.

But to the wicked God says: “What right have you to recite my statutes or take my covenant on your lips? For you hate discipline, and you cast my words behind you. If you see a thief, you are pleased with him, and you keep company with adulterers.

People do not despise a thief if he steals to satisfy his appetite when he is hungry, but if he is caught, he will pay sevenfold; he will give all the goods of his house.

Again I lifted my eyes and saw, and behold, a flying scroll! And he said to me, “What do you see?” I answered, “I see a flying scroll. Its length is twenty cubits, and its width ten cubits.” Then he said to me, “This is the curse that goes out over the face of the whole land. For everyone who steals shall be cleaned out according to what is on one side, and everyone who swears falsely shall be cleaned out according to what is on the other side. I will send it out, declares the Lord of hosts, and it shall enter the house of the thief, and the house of him who swears falsely by my name. And it shall remain in his house and consume it, both timber and stones.

If a man is found stealing one of his brothers of the people of Israel, and if he treats him as a slave or sells him, then that thief shall die. So you shall purge the evil from your midst.

Two things I ask of you; deny them not to me before I die: Remove far from me falsehood and lying; give me neither poverty nor riches; feed me with the food that is needful for me, lest I be full and deny you and say, “Who is the Lord?” or lest I be poor and steal and profane the name of my God.

So Jesus again said to them, “Truly, truly, I say to you, I am the door of the sheep. All who came before me are thieves and robbers, but the sheep did not listen to them. I am the door. If anyone enters by me, he will be saved and will go in and out and find pasture. The thief comes only to steal and kill and destroy. I came that they may have life and have it abundantly.

When I would heal Israel, the iniquity of Ephraim is revealed, and the evil deeds of Samaria; for they deal falsely; the thief breaks in, and the bandits raid outside. But they do not consider that I remember all their evil. Now their deeds surround them; they are before my face. By their evil they make the king glad, and the princes by their treachery.

As a thief is shamed when caught, so the house of Israel shall be shamed: they, their kings, their officials, their priests, and their prophets.

If a man steals an ox or a sheep, and kills it or sells it, he shall repay five oxen for an ox, and four sheep for a sheep. If a thief is found breaking in and is struck so that he dies, there shall be no blood guilt for him, but if the sun has risen on him, there shall be blood guilt for him. He shall surely pay. If he has nothing, then he shall be sold for his theft. If the stolen beast is found alive in his possession, whether it is an ox or a donkey or a sheep, he shall pay double.

He said this, not because he cared about the poor, but because he was a thief, and having charge of the moneybag he used to help himself to what was put into it.

If a man gives to his neighbor money or goods to keep safe, and it is stolen from the man’s house, then, if the thief is found, he shall pay double.

Put no trust in extortion; set no vain hopes on robbery; if riches increase, set not your heart on them.

Whoever steals a man and sells him, and anyone found in possession of him, shall be put to death.

20 Bible Verses About Our Finances and Business

20 Bible Verses About The Doer of The Word of God