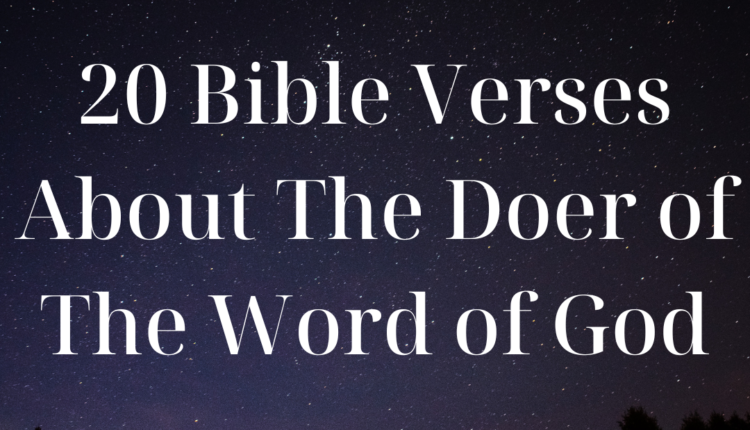 20 Bible Verses About The Doer of The Word of God

Today we will be dealing with 20 Bible verses about the doer of the word of God.

We have those who listen to the word of God alone but don’t practice it in their daily activities and we have the ones who follow the will of God accordingly. Let’s be the type of christian that not only read the bible but practice what the bible says. Our life should be a reflection of who Jesus is as we are being watched by unbelievers who are ready to criticize us when we fail to practice what we preach. Twenty bible verses about those who obey the word of God have been collected in today’s topic.

But be doers of the word, and not hearers only, deceiving yourselves. For if anyone is a hearer of the word and not a doer, he is like a man who looks intently at his natural face in a mirror. For he looks at himself and goes away and at once forgets what he was like. But the one who looks into the perfect law, the law of liberty, and perseveres, being no hearer who forgets but a doer who acts, he will be blessed in his doing.

To the angel of the church in Ephesus write: ‘The words of him who holds the seven stars in his right hand, who walks among the seven golden lampstands. “‘I know your works, your toil and your patient endurance, and how you cannot bear with those who are evil, but have tested those who call themselves apostles and are not, and found them to be false. I know you are enduring patiently and bearing up for my name’s sake, and you have not grown weary. But I have this against you, that you have abandoned the love you had at first. Remember therefore from where you have fallen; repent, and do the works you did at first. If not, I will come to you and remove your lamp stand from its place, unless you repent.

The revelation of Jesus Christ, which God gave him to show to his servants the things that must soon take place. He made it known by sending his angel to his servant John, who bore witness to the word of God and to the testimony of Jesus Christ, even to all that he saw. Blessed is the one who reads aloud the words of this prophecy, and blessed are those who hear, and who keep what is written in it, for the time is near. John to the seven churches that are in Asia: Grace to you and peace from him who is and who was and who is to come, and from the seven spirits who are before his throne, and from Jesus Christ the faithful witness, the firstborn of the dead, and the ruler of kings on earth. To him who loves us and has freed us from our sins by his blood.

What then shall we say was gained by Abraham, our forefather according to the flesh? For if Abraham was justified by works, he has something to boast about, but not before God. For what does the Scripture say? “Abraham believed God, and it was counted to him as righteousness.

The pride of your heart has deceived you, you who live in the clefts of the rock, in your lofty dwelling, who say in your heart, “Who will bring me down to the ground?

The law of the Lord is perfect, reviving the soul; the testimony of the Lord is sure, making wise the simple; the precepts of the Lord are right, rejoicing the heart; the commandment of the Lord is pure, enlightening the eyes; the fear of the Lord is clean, enduring forever; the rules of the Lord are true, and righteous altogether. More to be desired are they than gold, even much fine gold; sweeter also than honey and drippings of the honeycomb. Moreover, by them is your servant warned; in keeping them there is great reward.

Then the dragon became furious with the woman and went off to make war on the rest of her offspring, on those who keep the commandments of God and hold to the testimony of Jesus. And he stood on the sand of the sea.

The one who conquers and who keeps my works until the end, to him I will give authority over the nations.

Beloved, do not believe every spirit, but test the spirits to see whether they are from God, for many false prophets have gone out into the world.

Do not be deceived: God is not mocked, for whatever one sows, that will he also reap.

Just as Abraham “believed God, and it was counted to him as righteousness”?

I have been crucified with Christ. It is no longer I who live, but Christ who lives in me. And the life I now live in the flesh I live by faith in the Son of God, who loved me and gave himself for me.

Love the Lord, all you his saints! The Lord preserves the faithful but abundantly repays the one who acts in pride.

With regard to the works of man, by the word of your lips I have avoided the ways of the violent.

But his delight is in the law of the Lord, and on his law he meditates day and night.

Every word of God proves true; he is a shield to those who take refuge in him.

20 Bible Verses About Identity In Christ