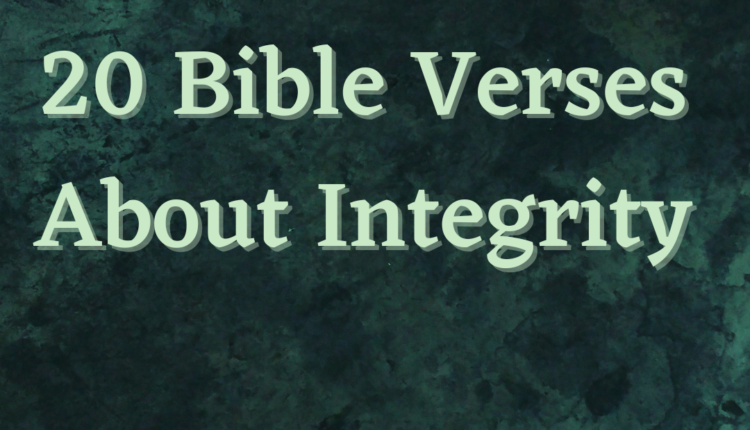 Today we will be dealing with 20 bible verses about Integrity.

According to the dictionary Integrity is the quality of being honest and having strong moral principles and moral uprightness. Integrity is a very important quality a Christian must possess. An honest man is a good man and also he will prosper in all his ways. God loves an honest man as lieing is a sin. In the Commandments that God gave to us to follow as Christians, we see there that God frowns against lieing and uphold honesty. While we are here on earth it is important we live an honest life so that people around us can see that it is true we are Children of God.

Remember it is said that most unbelievers don’t read their bible but they study the ways of believers around them. They read into everything believers does as of they are reading their scriptures. We should make sure that how we relate to people in our environment is enough to win souls for God.

A liar cannot preach to the people he is lieing to as they won’t believe he is a good christian. God promised that a just man will prosper and be blessed and even his generation won’t be left out. Proverbs 20:7 “The just man walketh in his integrity: his children are blessed after him”. There are many blessings available for a just man.

Whoever walks in integrity walks securely, but he who makes his ways crooked will be found out.

The integrity of the upright guides them, but the crookedness of the treacherous destroys them.

Better is a poor man who walks in his integrity than a rich man who is crooked in his ways.

Beloved, let us love one another, for love is from God, and whoever loves has been born of God and knows God. Anyone who does not love does not know God, because God is love. In this the love of God was made manifest among us, that God sent his only Son into the world, so that we might live through him. In this is love, not that we have loved God but that he loved us and sent his Son to be the propitiation for our sins.

And the Lord said to Satan, “Have you considered my servant Job, that there is none like him on the earth, a blameless and upright man, who fears God and turns away from evil? He still holds fast his integrity, although you incited me against him to destroy him without reason.

A Psalm of David. O Lord, who shall sojourn in your tent? Who shall dwell on your holy hill? He who walks blamelessly and does what is right and speaks truth in his heart; who does not slander with his tongue and does no evil to his neighbor, nor takes up a reproach against his friend; in whose eyes a vile person is despised, but who honors those who fear the Lord; who swears to his own hurt and does not change; who does not put out his money at interest and does not take a bribe against the innocent. He who does these things shall never be moved.

Of David. Vindicate me, O Lord, for I have walked in my integrity, and I have trusted in the Lord without wavering. Prove me, O Lord, and try me; test my heart and my mind. For your steadfast love is before my eyes, and I walk in your faithfulness.

My lips will not speak falsehood, and my tongue will not utter deceit. Far be it from me to say that you are right; till I die I will not put away my integrity from me. I hold fast my righteousness and will not let it go; my heart does not reproach me for any of my days.

But as for you, teach what accords with sound doctrine. Older men are to be sober-minded, dignified, self-controlled, sound in faith, in love, and in steadfastness. Older women likewise are to be reverent in behavior, not slanderers or slaves to much wine. They are to teach what is good, and so train the young women to love their husbands and children, to be self-controlled, pure, working at home, kind, and submissive to their own husbands, that the word of God may not be reviled.

Does not oppress anyone, but restores to the debtor his pledge, commits no robbery, gives his bread to the hungry and covers the naked with a garment, does not lend at interest or take any profit, withholds his hand from injustice, executes true justice between man and man, walks in my statutes, and keeps my rules by acting faithfully—he is righteous; he shall surely live, declares the Lord God.

But he refused and said to his master’s wife, “Behold, because of me my master has no concern about anything in the house, and he has put everything that he has in my charge. He is not greater in this house than I am, nor has he kept back anything from me except yourself, because you are his wife. How then can I do this great wickedness and sin against God?” And as she spoke to Joseph day after day, he would not listen to her, to lie beside her or to be with her. But one day, when he went into the house to do his work and none of the men of the house was there in the house, she caught him by his garment, saying, “Lie with me.” But he left his garment in her hand and fled and got out of the house.

But be doers of the word, and not hearers only, deceiving yourselves. For if anyone is a hearer of the word and not a doer, he is like a man who looks intently at his natural face in a mirror. For he looks at himself and goes away and at once forgets what he was like. But the one who looks into the perfect law, the law of liberty, and perseveres, being no hearer who forgets but a doer who acts, he will be blessed in his doing.

Did he not himself say to me, ‘She is my sister’? And she herself said, ‘He is my brother.’ In the integrity of my heart and the innocence of my hands I have done this.” Then God said to him in the dream, “Yes, I know that you have done this in the integrity of your heart, and it was I who kept you from sinning against me. Therefore I did not let you touch her.

So you will walk in the way of the good and keep to the paths of the righteous. For the upright will inhabit the land, and those with integrity will remain in it.

I know, my God, that you test the heart and have pleasure in uprightness. In the uprightness of my heart I have freely offered all these things, and now I have seen your people, who are present here, offering freely and joyously to you.

Then Achish called David and said to him, “As the Lord lives, you have been honest, and to me it seems right that you should march out and in with me in the campaign. For I have found nothing wrong in you from the day of your coming to me to this day. Nevertheless, the lords do not approve of you.

And as for you, if you will walk before me, as David your father walked, with integrity of heart and uprightness, doing according to all that I have commanded you, and keeping my statutes and my rules, then I will establish your royal throne over Israel forever, as I promised David your father, saying, ‘You shall not lack a man on the throne of Israel.

And Moses was very angry and said to the Lord, “Do not respect their offering. I have not taken one donkey from them, and I have not harmed one of them.

By this I know that you delight in me: my enemy will not shout in triumph over me. But you have upheld me because of my integrity, and set me in your presence forever. Blessed be the Lord, the God of Israel, from everlasting to everlasting! Amen and Amen.

For the Lord gives wisdom; from his mouth come knowledge and understanding; he stores up sound wisdom for the upright; he is a shield to those who walk in integrity, guarding the paths of justice and watching over the way of his saints.

20 Bible Verses About Freedom in Christ