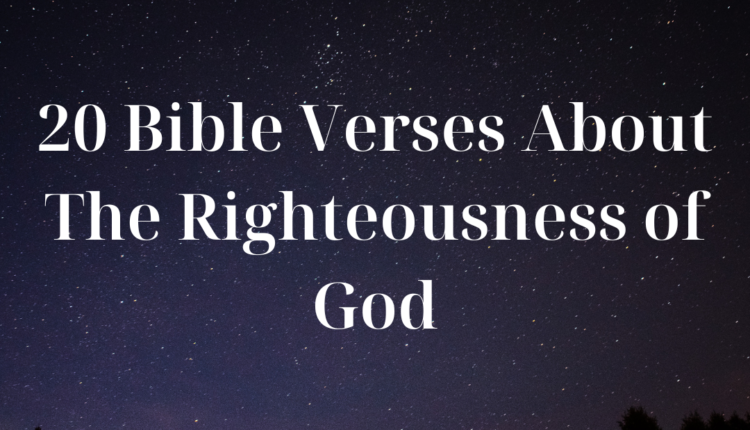 20 Bible Verses About The Righteousness of God

Today we will be dealing with 20 bible verses about The Righteousness of God.

God loves us so much. God’s love for us is so great that He gave us His son to die for us so that every believers will have free access to throne of grace. Jeremiah 36:3 (KJV); It may be that the house of Judah will hear all the evil which I purpose to do unto them; that they may return every man from his evil way; that I may forgive their iniquity and their sin. God indeed proved Himself to be a righteous God, a loving one at that, who knows the mind of every of His creations. Everything that was said to the Israelites was still a proposed threat that if they don’t change then these things will happen to them.

God loves us irrespective of our shortcomings. In His love, He chastises us, telling us what the consequences of our shortcomings and actions will be if we don’t turn a new leaf. Just as parents warn their children when they do something wrong and can also threaten them with rod In order to caution them and prevent them from going astray.God is waiting for us to repent and be forgiven. We must heed to the warning of God to avoid His wrath. We must please God always. Twenty bible verses about God’s righteousness and love have been collected in today’s topic.

And be found in him, not having a righteousness of my own that comes from the law, but that which comes through faith in Christ, the righteousness from God that depends on faith.

To put off your old self, which belongs to your former manner of life and is corrupt through deceitful desires, and to be renewed in the spirit of your minds, and to put on the new self, created after the likeness of God in true righteousness and holiness.

But now the righteousness of God has been manifested apart from the law, although the Law and the Prophets bear witness to it— the righteousness of God through faith in Jesus Christ for all who believe. For there is no distinction: for all have sinned and fall short of the glory of God, and are justified by his grace as a gift, through the redemption that is in Christ Jesus, whom God put forward as a propitiation by his blood, to be received by faith. This was to show God’s righteousness, because in his divine forbearance he had passed over former sins.

He saved us, not because of works done by us in righteousness, but according to his own mercy, by the washing of regeneration and renewal of the Holy Spirit, whom he poured out on us richly through Jesus Christ our Savior, so that being justified by his grace we might become heirs according to the hope of eternal life.

What then shall we say was gained by Abraham, our forefather according to the flesh? For if Abraham was justified by works, he has something to boast about, but not before God. For what does the Scripture say? “Abraham believed God, and it was counted to him as righteousness.” Now to the one who works, his wages are not counted as a gift but as his due. And to the one who does not work but believes in him who justifies the ungodly, his faith is counted as righteousness.

Seventy weeks are decreed about your people and your holy city, to finish the transgression, to put an end to sin, and to atone for iniquity, to bring in everlasting righteousness, to seal both vision and prophet, and to anoint a most holy place.

For our sake he made him to be sin who knew no sin, so that in him we might become the righteousness of God.

For Christ also suffered once for sins, the righteous for the unrighteous, that he might bring us to God, being put to death in the flesh but made alive in the spirit.

And because of him you are in Christ Jesus, who became to us wisdom from God, righteousness and sanctification and redemption.

Sow for yourselves righteousness; reap steadfast love; break up your fallow ground, for it is the time to seek the Lord, that he may come and rain righteousness upon you.

Therefore, since we have been justified by faith, we have peace with God through our Lord Jesus Christ. Through him we have also obtained access by faith into this grace in which we stand, and we rejoice in hope of the glory of God. More than that, we rejoice in our sufferings, knowing that suffering produces endurance, and endurance produces character, and character produces hope, and hope does not put us to shame, because God’s love has been poured into our hearts through the Holy Spirit who has been given to us.

Then you will understand the fear of the Lord and find the knowledge of God. For the Lord gives wisdom; from his mouth come knowledge and understanding; he stores up sound wisdom for the upright; he is a shield to those who walk in integrity, guarding the paths of justice and watching over the way of his saints. Then you will understand righteousness and justice and equity, every good path.

And he believed the Lord, and he counted it to him as righteousness.

And a harvest of righteousness is sown in peace by those who make peace.

In the path of righteousness is life, and in its pathway there is no death.

For what does the Scripture say? “Abraham believed God, and it was counted to him as righteousness.

But for you who fear my name, the sun of righteousness shall rise with healing in its wings. You shall go out leaping like calves from the stall.

I put on righteousness, and it clothed me; my justice was like a robe and a turban.

And it will be righteousness for us, if we are careful to do all this commandment before the Lord our God, as he has commanded us.

20 Bible Verses About Our Holy Chamber