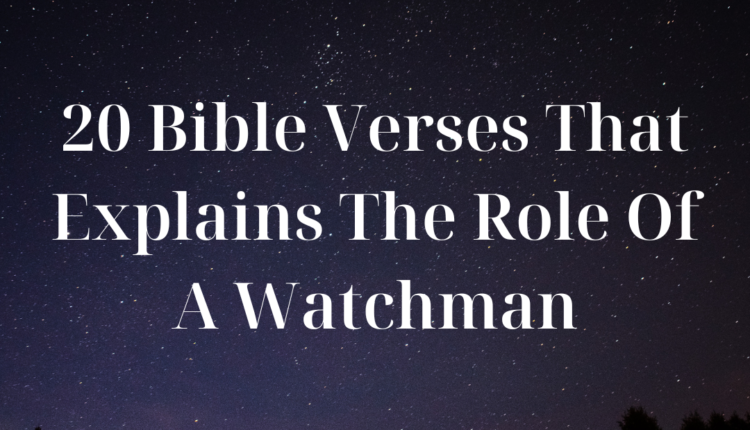 20 Bible Verses That Explains The Role Of A Watchman

Today we will be dealing with 20 bible verses that explains the role of a Watchman.

The Bible refers to watchmen in a spiritual sense. God appointed prophets as spiritual watchmen over the souls of His people: “Son of man, I have made you a watchman for the people of Israel; so hear the word I speak and give them warning from me(Eze 33vs 7).The prophets’ job as watchmen was to urge God’s people to live faithfully and warn them of the perils involved in falling away from the Lord and doing evil.

As watchmen, the prophets were also called to warn wicked people of the judgment and destruction that would come their way unless they turned from their evil ways. God has called not only prophets or leaders as watchmen but all Christians to be watchmen. By doing this we are looking out for our brethren as the bible says watch and pray so that ye fall not into temptations. Twenty bible verses have been collected for us to understand what the role of a watchman is.

The word of the Lord came to me: “Son of man, speak to your people and say to them, If I bring the sword upon a land, and the people of the land take a man from among them, and make him their watchman, and if he sees the sword coming upon the land and blows the trumpet and warns the people, then if anyone who hears the sound of the trumpet does not take warning, and the sword comes and takes him away, his blood shall be upon his own head. He heard the sound of the trumpet and did not take warning; his blood shall be upon himself. But if he had taken warning, he would have saved his life.

On your walls, O Jerusalem, I have set watchmen; all the day and all the night they shall never be silent. You who put the Lord in remembrance, take no rest.

For there shall be a day when watchmen will call in the hill country of Ephraim: ‘Arise, and let us go up to Zion, to the Lord our God.

Set up a standard against the walls of Babylon; make the watch strong; set up watchmen; prepare the ambushes; for the Lord has both planned and done what he spoke concerning the inhabitants of Babylon.

They prepare the table, they spread the rugs, they eat, they drink. Arise, O princes; oil the shield! For thus the Lord said to me: “Go, set a watchman; let him announce what he sees. When he sees riders, horsemen in pairs, riders on donkeys, riders on camels, let him listen diligently, very diligently.” Then he who saw cried out: “Upon a watchtower I stand, O Lord, continually by day, and at my post I am stationed whole nights. And behold, here come riders, horsemen in pairs!” And he answered, “Fallen, fallen is Babylon; and all the carved images of her gods he has shattered to the ground.

The watchmen found me as they went about in the city. “Have you seen him whom my soul loves?

So a man on horseback went to meet him and said, “Thus says the king, ‘Is it peace?’” And Jehu said, “What do you have to do with peace? Turn around and ride behind me.” And the watchman reported, saying, “The messenger reached them, but he is not coming back.

And there was a panic in the camp, in the field, and among all the people. The garrison and even the raiders trembled, the earth quaked, and it became a very great panic. And the watchmen of Saul in Gibeah of Benjamin looked, and behold, the multitude was dispersing here and there. Then Saul said to the people who were with him, “Count and see who has gone from us.” And when they had counted, behold, Jonathan and his armor-bearer were not there. So Saul said to Ahijah, “Bring the ark of God here.” For the ark of God went at that time with the people of Israel.

The voice of your watchmen—they lift up their voice; together they sing for joy; for eye to eye they see the return of the Lord to Zion.

And we prayed to our God and set a guard as a protection against them day and night.

Blessed is the one who listens to me, watching daily at my gates, waiting beside my doors.

To him the gatekeeper opens. The sheep hear his voice, and he calls his own sheep by name and leads them out.

The watchmen found me as they went about in the city; they beat me, they bruised me, they took away my veil, those watchmen of the walls.

But Absalom fled. And the young man who kept the watch lifted up his eyes and looked, and behold, many people were coming from the road behind him by the side of the mountain.

The prophet is the watchman of Ephraim with my God; yet a fowler’s snare is on all his ways, and hatred in the house of his God.

20 Bible Verses About Our Holy Chamber