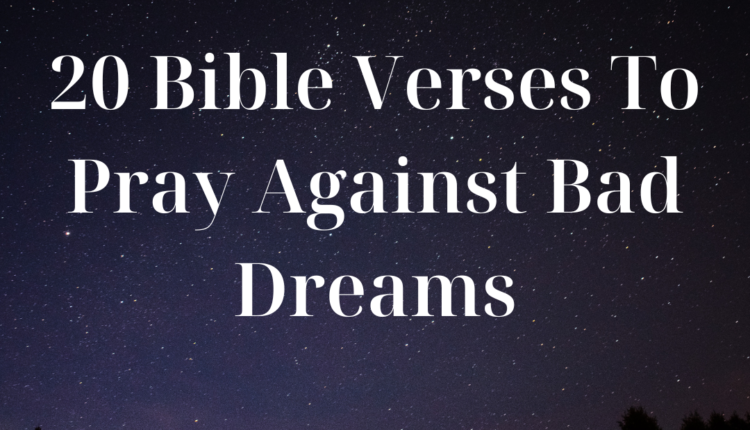 Today we will be dealing with 20 Bible Verses To Pray Against Bad Dreams.

Bad dreams are the cause of many challenges and problems Christians and non believers face. In getting the problem and side effects of evil dreams solved and nullified you will have to cancel every bad dream in your life through some Bible verses and prayers.There are lots of verses in the Bible that can cancel, nullify, scatter the effect of bad dreams or evil dreams.

If we use the Bible verses well to fight against some bad dreams, there wouldn’t have been the proliferation of evil dreams surrounding our lives today. In every battle, the word of God is the right weapon to achieve a considerable victory. The word of God has been given to us to fight against the devil and win as one of the verses says if God be for us who can be against us?.

As Christians we have the power to exercise control over the devil by the powerful weapon God has placed in our hands which is the powerful verses from the scriptures. 20 Bible verses have been collected for us to pray against evil dreams in today’s topic.

He who dwells in the shelter of the Most High will abide in the shadow of the Almighty. I will say to the Lord, “My refuge and my fortress, my God, in whom I trust.” For he will deliver you from the snare of the fowler and from the deadly pestilence. He will cover you with his pinions, and under his wings you will find refuge; his faithfulness is a shield and buckler.

Do not be anxious about anything, but in everything by prayer and supplication with thanksgiving let your requests be made known to God. And the peace of God, which surpasses all understanding, will guard your hearts and your minds in Christ Jesus.

When the unclean spirit has gone out of a person, it passes through waterless places seeking rest, but finds none. Then it says, ‘I will return to my house from which I came.’ And when it comes, it finds the house empty, swept, and put in order. Then it goes and brings with it seven other spirits more evil than itself, and they enter and dwell there, and the last state of that person is worse than the first. So also will it be with this evil generation.

But there is a God in heaven who reveals mysteries, and he has made known to King Nebuchadnezzar what will be in the latter days. Your dream and the visions of your head as you lay in bed are these.

I appeal to you therefore, brothers, by the mercies of God, to present your bodies as a living sacrifice, holy and acceptable to God, which is your spiritual worship. Do not be conformed to this world, but be transformed by the renewal of your mind, that by testing you may discern what is the will of God, what is good and acceptable and perfect.

Now Peter and John were going up to the temple at the hour of prayer, the ninth hour. And a man lame from birth was being carried, whom they laid daily at the gate of the temple that is called the Beautiful Gate to ask alms of those entering the temple. Seeing Peter and John about to go into the temple, he asked to receive alms. And Peter directed his gaze at him, as did John, and said, “Look at us.” And he fixed his attention on them, expecting to receive something from them.

The Lord will cause your enemies who rise against you to be defeated before you. They shall come out against you one way and flee before you seven ways.

Then the Chaldeans said to the king in Aramaic, “O king, live forever! Tell your servants the dream, and we will show the interpretation.

Behold, I have given you authority to tread on serpents and scorpions, and over all the power of the enemy, and nothing shall hurt you.

This is the covenant that I will make with them after those days, declares the Lord: I will put my laws on their hearts, and write them on their minds.

The words of Nehemiah the son of Hacaliah. Now it happened in the month of Chislev, in the twentieth year, as I was in Susa the capital, that Hanani, one of my brothers, came with certain men from Judah. And I asked them concerning the Jews who escaped, who had survived the exile, and concerning Jerusalem. And they said to me, “The remnant there in the province who had survived the exile is in great trouble and shame. The wall of Jerusalem is broken down, and its gates are destroyed by fire.” As soon as I heard these words I sat down and wept and mourned for days, and I continued fasting and praying before the God of heaven. And I said, “O Lord God of heaven, the great and awesome God who keeps covenant and steadfast love with those who love him and keep his commandments.

I sought the Lord, and he answered me and delivered me from all my fears. Those who look to him are radiant, and their faces shall never be ashamed. This poor man cried, and the Lord heard him and saved him out of all his troubles. The angel of the Lord encamps around those who fear him, and delivers them.

To the choirmaster. A Psalm of David, when Nathan the prophet went to him, after he had gone in to Bathsheba. Have mercy on me, O God, according to your steadfast love; according to your abundant mercy blot out my transgressions. Wash me thoroughly from my iniquity, and cleanse me from my sin! For I know my transgressions, and my sin is ever before me. Against you, you only, have I sinned and done what is evil in your sight, so that you may be justified in your words and blameless in your judgment. Behold, I was brought forth in iniquity, and in sin did my mother conceive me.

In the same way, let your light shine before others, so that they may see your good works and give glory to your Father who is in heaven.

So in the morning his spirit was troubled, and he sent and called for all the magicians of Egypt and all its wise men. Pharaoh told them his dreams, but there was none who could interpret them to Pharaoh.

Again Jesus spoke to them, saying, “I am the light of the world. Whoever follows me will not walk in darkness, but will have the light of life.

And he said, “Hear my words: If there is a prophet among you, I the Lord make myself known to him in a vision; I speak with him in a dream.

20 Bible Verses To Pray for Wisdom For Your Children