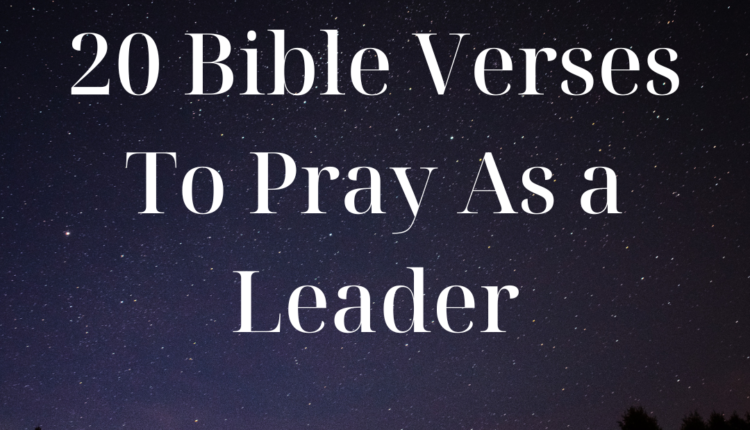 20 Bible Verses To Pray As a Leader

Today we will be dealing with 20 Bible Verses To Pray As a Leader.

Using Prophet Joshua as a case study, God commanded him to lead the Isrealites. His leadership was certified by God who commissioned him to lead Israel in her efforts to take the land. There are conditions to serve God’s people which are to do all that is written in the law, he must meditate on it and he must be strong.

Leadership is all about serving God’s people with the sense and directions of God. For Joshua to be seen as a successful leader, the nation Israel must conquer, possess, settle and prosper in the Promised Land. Without God, it could be difficult, but with Him, it would be a great adventure. Doing according to the law shows obedience to God, relying on God to lead while he followed. S

God’s leaders make a special effort to think on God’s word every day. Their minds must not be so busied with the things of the world that they do not have time to think study and think of God’s words. Success and prosperity comes from obeying God’s word, constantly studying the word of God and following its teachings.

God’s definition of success and standard is more important than the world’s. So when we find ourselves leading a group we should rely on God to help us. Here are 20 Bible verses a leader can pray with to ask for strength, grace and wisdom.

20 Bible Verses To Pray For The Sick