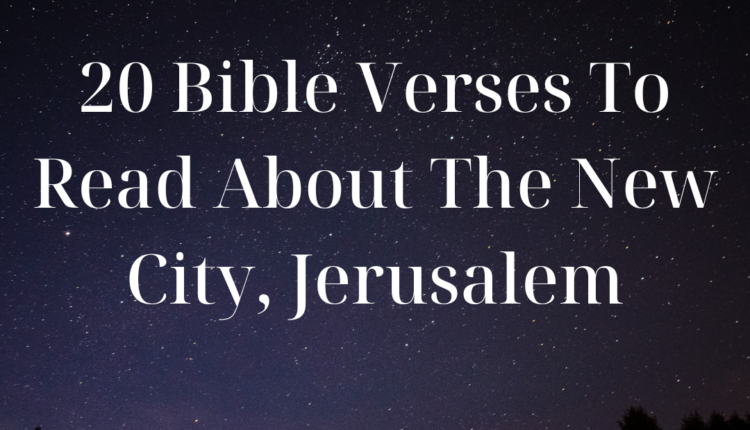 20 Bible Verses To Read About The New City, Jerusalem

Today we will be dealing with 20 Bible verses to read about the New City, Jerusalem

A city is a large settlement of people. The new city is not like the city on earth but a new city biblically called the city of God. A city built with the hands of God. This new city promised to God’s children is a city full of God’s glory, it’s is indestructible, spiritual edifice, all inhabitants therein are eternally secured. This is promised as a reward for saints. From the above description we have the large description of the church triumphant under the emblem of a city.

Far exceeding in riches and splendor above all the cities of the world and this new Jerusalem is represented to us both in the exterior and interior part of it. The walls are safe. No city on earth that has the perfect and beautiful description of heavens glory as revealed to us all, in the new city, Jerusalem on high. Every believers must desire and strive to be a candidate of the heavenly abode.

20 Bible verses to read about the new Jerusalem have been collected below.

Then I saw a new heaven and a new earth, for the first heaven and the first earth had passed away, and the sea was no more. And I saw the holy city, new Jerusalem, coming down out of heaven from God, prepared as a bride adorned for her husband. And I heard a loud voice from the throne saying, “Behold, the dwelling place of God is with man. He will dwell with them, and they will be his people, and God himself will be with them as their God. He will wipe away every tear from their eyes, and death shall be no more, neither shall there be mourning, nor crying, nor pain anymore, for the former things have passed away.” And he who was seated on the throne said, “Behold, I am making all things new.” Also he said, “Write this down, for these words are trustworthy and true.

The one who conquers, I will make him a pillar in the temple of my God. Never shall he go out of it, and I will write on him the name of my God, and the name of the city of my God, the new Jerusalem, which comes down from my God out of heaven, and my own new name.

But you have come to Mount Zion and to the city of the living God, the heavenly Jerusalem, and to innumerable angels in festal gathering.

But be glad and rejoice forever in that which I create; for behold, I create Jerusalem to be a joy, and her people to be a gladness. I will rejoice in Jerusalem and be glad in my people; no more shall be heard in it the sound of weeping and the cry of distress.

At that time shall arise Michael, the great prince who has charge of your people. And there shall be a time of trouble, such as never has been since there was a nation till that time. But at that time your people shall be delivered, everyone whose name shall be found written in the book. And many of those who sleep in the dust of the earth shall awake, some to everlasting life, and some to shame and everlasting contempt. And those who are wise shall shine like the brightness of the sky above; and those who turn many to righteousness, like the stars forever and ever.

Then I looked, and behold, on Mount Zion stood the Lamb, and with him 144,000 who had his name and his Father’s name written on their foreheads. And I heard a voice from heaven like the roar of many waters and like the sound of loud thunder. The voice I heard was like the sound of harpists playing on their harps, and they were singing a new song before the throne and before the four living creatures and before the elders. No one could learn that song except the 144,000 who had been redeemed from the earth. It is these who have not defiled themselves with women, for they are virgins. It is these who follow the Lamb wherever he goes. These have been redeemed from mankind as firstfruits for God and the Lamb.

And they sang a new song, saying, “Worthy are you to take the scroll and to open its seals, for you were slain, and by your blood you ransomed people for God from every tribe and language and people and nation, and you have made them a kingdom and priests to our God, and they shall reign on the earth.

And night will be no more. They will need no light of lamp or sun, for the Lord God will be their light, and they will reign forever and ever.

He who has an ear, let him hear what the Spirit says to the churches. To the one who conquers I will grant to eat of the tree of life, which is in the paradise of God.

Then I saw thrones, and seated on them were those to whom the authority to judge was committed. Also I saw the souls of those who had been beheaded for the testimony of Jesus and for the word of God, and those who had not worshiped the beast or its image and had not received its mark on their foreheads or their hands. They came to life and reigned with Christ for a thousand years. The rest of the dead did not come to life until the thousand years were ended. This is the first resurrection. Blessed and holy is the one who shares in the first resurrection! Over such the second death has no power, but they will be priests of God and of Christ, and they will reign with him for a thousand years.

So when they had come together, they asked him, “Lord, will you at this time restore the kingdom to Israel?”

After this I looked, and behold, a great multitude that no one could number, from every nation, from all tribes and peoples and languages, standing before the throne and before the Lamb, clothed in white robes, with palm branches in their hands, and crying out with a loud voice, “Salvation belongs to our God who sits on the throne, and to the Lamb!”

And in the days of those kings the God of heaven will set up a kingdom that shall never be destroyed, nor shall the kingdom be left to another people. It shall break in pieces all these kingdoms and bring them to an end, and it shall stand forever.

For behold, I create new heavens and a new earth, and the former things shall not be remembered or come into mind.

But according to his promise we are waiting for new heavens and a new earth in which righteousness dwells.

Therefore I tell you, the kingdom of God will be taken away from you and given to a people producing its fruits.

“For as the new heavens and the new earth that I make shall remain before me, says the Lord, so shall your offspring and your name remain.

20 Bible Verses About The River of Life